On 29 July 2012, the rudder of a Pilatus PC6 detached in flight and fell onto the stabiliser/elevator preventing its normal movement. Pitch control was gained using the electric stabiliser trim and a successful touchdown was achieved on the second attempt. However, directional control could not be maintained and a lateral runway excursion followed. Investigation attributed the rudder failure to maintenance error which went undetected. Unapproved dispensation by the maintenance organisation involved, which allowed some dual inspections for correct completion of safety critical tasks to be carried out by the same person, was considered to be a significant contributory factor.

On 29 July 2012, a Pilatus PC6 (EC-IBY) being operated by Skydive Lillo on parachute drop detail out of Évora in day Visual Meteorological Conditions (VMC) had just initiated descent from around 13000 feet with only the pilot on board after completing the drop when there was a sudden loud noise/vibration from the tail section of the aircraft and the pilot found that he had lost both rudder and stabiliser authority. Pitch control was regained using the electric stabiliser trim and a successful touchdown was achieved on the second attempt. However, directional control could not be maintained as the tailwheel aircraft decelerated and the aircraft departed the side of the runway. The rudder was found to have partly detached and fallen onto the horizontal stabiliser. No additional damage to the aircraft resulted from the runway excursion during landing. 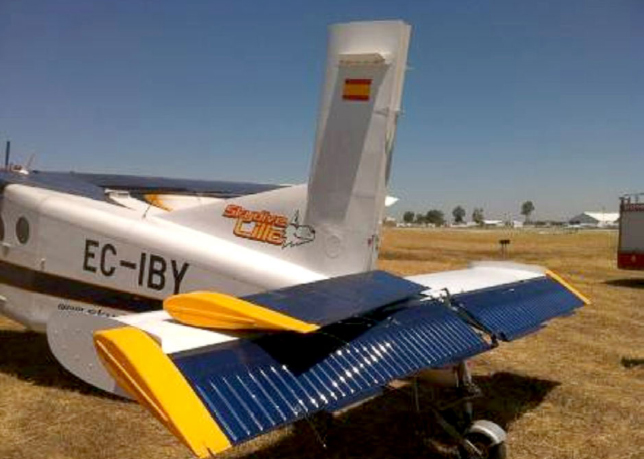 An Investigation was carried out by the Comisión de Investigación de Accidentes e Incidentes de Aviación Civil (CIAIAC). It was noted that the flight was the tenth of the day for the 34-year old pilot, who held a CPL and had accumulated 1550 hours in total and 205 hours on type. He had been wearing a parachute and following the initial loss of control authority reported that he had considered the possibility of jumping but considered that such action was only appropriate "as a last resort". In fact he had been able to visually confirm that the horizontal stabiliser and elevator remained in a fixed position and with the benefit of the high altitude at which the problem had occurred was able to establish that use of the electric stabiliser trim would enable sufficient pitch control to make an attempt at landing a safe proposition option. ATC were advised of the situation and, during a subsequent visual check of the tail prior to the landing attempt, were later able to advise that "nothing unusual" was apparent. A long shallow approach was dictated by the limited pitch control available. A go around had to be flown from the first approach because the aircraft was too high but the second approach resulted in a landing on the centreline of the 23 metre wide runway before a veer off to the left resulting from the complete absence of rudder authority. The rudder pedals had "jammed hard right" when the rudder partially detached.

The Investigation concluded that "the pilot’s calm and relaxed reaction to a sudden emergency that exhibited no prior symptoms made it possible for him to correctly identify the fault and properly select the actions and potential solutions needed to regain control of the airplane". It also noted that "(his) actions were based on his sound knowledge of the aircraft’s systems and its performance".

An examination of the aircraft disclosed that the upper axle of the rudder and the point where it was attached to the vertical stabiliser were missing and that this had resulted in the lower support of the rudder bending and partially breaking along with the torsion tube and the rudder, which fell to the left onto the upper surface of the left horizontal stabilizer and its associated elevator as illustrated. The left elevator skin was found to have been torn by the rudder trim tab lever and it was evident that this would have limited any rearward motion of the rudder once it had fallen onto the horizontal stabiliser. The upper hinge bolt missing from the rudder was not found within the rudder structure and it was therefore presumed to have been lost in flight. The washer corresponding to this bolt was found inside the rudder attached to the locking screw along with the lockwire which was broken and twisted at the hinge bolt end. The locknut on this locking screw was found riveted in place on the top part of the tooling hole.

The outboard hinge bolts on both elevators were examined and it was confirmed that subsequent to modification in accordance with Pilatus SB 55-001 R1, the lockwires had in both cases been installed in the counter clockwise, or loosening, direction. A check on the behaviour of a lockwire installed in this way showed that (after requiring an initial torque of 70 lb/in instead of the specified 45 lb/in plus run down torque) there was no resistance for the initial 2/3 of a bolt turn and that the wire remaining thereafter allowed the bolt to continue loosening with a progressively decreasing amount of force required until the lockwire broke before the hinge bolt was out of the hole. It was observed that its final appearance was clearly "very similar to that of the rudder hinge bolt lockwire". When the deflection of the rudder was examined, a mark was found indicating impact with the hinge fitting at either end of its travel which showed that rudder travel was exceeding the stops. It was also noted that "the screws on the stops that regulate this limit at the base of the aft fuselage had lost part of the plastic material that performs this function and were unable to limit the rudder’s range of travel within the required limits". It was concluded that the lockwire on rudder hinge bolt had very probably also been installed in the loosening direction.

The Investigation established that modification in accordance with Pilatus SB 55-001 R1, which involved the replacement of the lockwire on the rudder upper hinge bolt and both elevator outboard bolts, had been mandated by European Aviation Safety Agency (EASA) AD 2011-0230 and had occurred in April 2012. The AD was found to have been issued partly in response to an event in which it was suspected that loss of elevator and rudder hinge bolts could be attributed to incorrect torque and locking of the bolts.

It was found that this maintenance input had been carried out by a single engineer employed by Pilatus who were the designated Continuing Airworthiness Management Organisation (CAMO) for the aircraft operator. In accordance with an amendment to the applicable Pilatus Maintenance Organisation Exposition in December 2011, any dual inspection requirement when working away from base - as when attending an operator to conduct maintenance - could be met by the same engineer "after a break of 10 to 15 minutes". It was noted that it was normal for Pilatus to send a single licensed engineer to do scheduled maintenance tasks and also that there was potential for time pressure to affect the chances of maintenance error on such detachments. It was found that "the amount of time scheduled for off-site inspections does not usually include contingency time, which typically requires overtime in order to comply with the client’s expectations and with travel schedules".

It was noted that the FOCA, the Swiss safety regulator, had not issued any specific approval for an exemption from the normal requirements for independent dual inspection and thus "they could not check its fulfilment and confirm a similar safety level" was being maintained as required under EASA Part 'M'.

The failure of a subsequent 100 hour check carried out by a different Pilatus engineer, which required inspection of the hinge bolts on the three control surfaces specified in AD 2011 - 0230 ADs, to detect any discrepancies was also noted. It was also found that this engineer was advised by the pilot that "he was having problems with the rudder, which was travelling beyond the base stops and this excess travel was leaving a mark in the area of the upper hinge bolt". It was found that "the mechanic (had) examined the settings on the rudder and checked the adjustment on the travel stops" and "based on his assessment and as no spare parts were available, he (had) told the pilot that the problem could wait until the next 100 hour inspection to be resolved".

The Cause of the event was formally stated as "the rudder detached during the flight due to the loss of the hinge bolt on its upper fitting, which had become loose due to its lockwire being attached in the wrong direction". It was additionally considered that a Contributing Factor in the loosening of this bolt was probably an excessive amount of load placed on the rudder during normal operations, possibly caused by the non-limited rudder travel consequent upon the mismatch of the rudder stop.

Safety Action taken by Pilatus as a result of the investigated event was noted to have included the following:

The Final Report was approved on 12 November 2014 and subsequently made available in English translation.