On 4 March 2013, a Beechcraft Premier 1A stalled and crashed soon after take off from Annemasse. The Investigation concluded that the loss of control was attributable to taking off with frozen deposits on the wings which the professional pilot flying the privately-operated aircraft had either not been aware of or had considered insignificant. It was found that the aircraft had been parked outside overnight and that overnight conditions, particularly the presence of a substantial quantity of cold-soaked fuel, had been conducive to the formation of frost and that no airframe de/anti icing facilities had been available at Annemasse.

On 4 March 2013, the professional pilot of a privately-operated Beechcraft Premier 1A (VP-CAZ) which had just taken off from Annemasse for Geneva in day Visual Meteorological Conditions (VMC) lost control of the aircraft and it crashed just outside the aerodrome perimeter. The aircraft was destroyed by the impact and a post crash fire and two of the three occupants were killed and the third ejected from the aircraft during the impact sequence and seriously injured. Before final impact with the ground, the aircraft had hit trees and buildings, substantially damaging the roof of a nearby house.

An Investigation was carried out by the French BEA. Although not a mandatory requirement, it was found that the aircraft had been fitted with a Cockpit Voice Recorder (CVR) which, whilst damaged, was successfully downloaded and provided very useful information, validated in respect of time using two sources of radar returns from the aircraft. 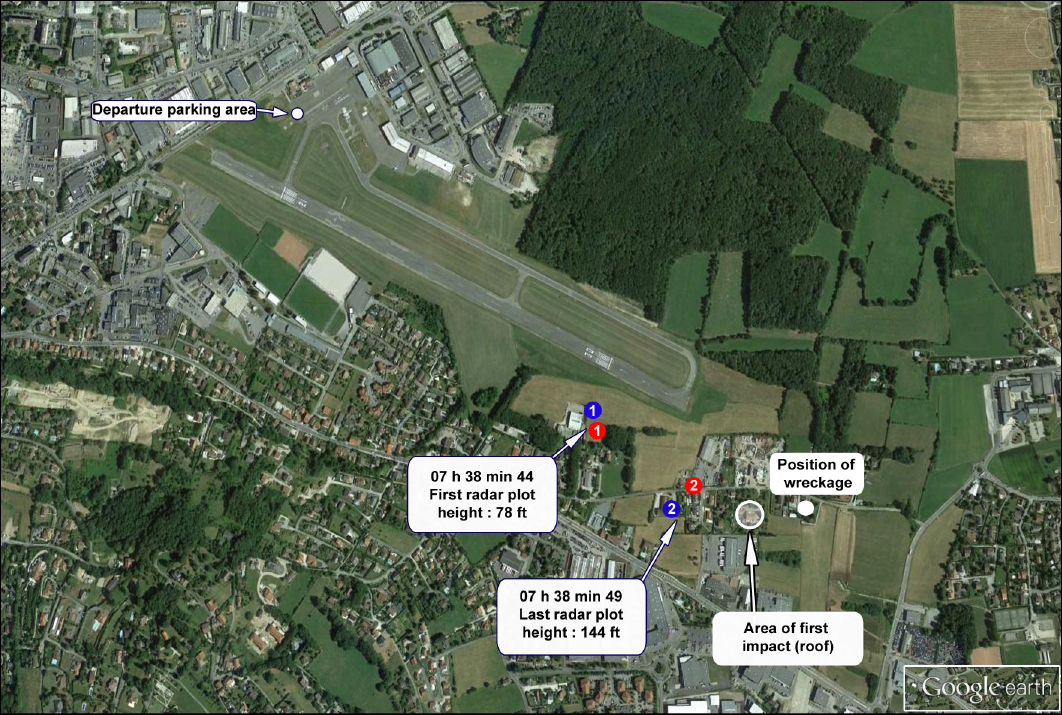 It was established that the flight had taken off from the 1300-metre long runway 12 at Annemasse at 0838 Local Time. A number of witnesses saw it take off and they all described a high nose up attitude just after take off followed by a steep bank to the right and then to the left followed by a loss of altitude. The flight lasted only 16 seconds and within 3 seconds of the aircraft becoming airborne, an Terrain Avoidance and Warning System (TAWS) Bank Angle Alert had been activated, followed two seconds later by the Stall Warning horn sounding. Thereafter, two further EGPWS Bank Angle Alerts and two further Stall Warnings had been activated, the final stall warning continuing until impact. Both engines had remained at the take off thrust setting until impact. It was concluded that the low height alone would have made it impossible to achieve stall recovery and regain control so that ground impact was inevitable.

It was found that the pilot, an employee of ‘Global Jet Luxembourg’, flew the accident aircraft exclusively for the benefit of its owner. He had intended to fly from Paris Le Bourget to Geneva the previous day but had been not been able to secure an arrival slot at Geneva and so had instead flown to Annemasse, following which the aircraft was parked on the apron there overnight with the intention being to position to Geneva first thing the following morning. It was noted that the combination of a temperature of around - 2°C and the very high humidity which prevailed at the aerodrome the previous evening and on the morning of the accident would have led to [[Ice Formation on Aircraft |frost or ice deposits forming on the wings]]. It was also noted that the OAT during the cruise on the flight from Paris the day before had been around - 40°C, which would have led to the fuel in the wing tanks reaching very low temperatures. It was therefore considered that the cold-soaked fuel in the wing tanks (which were about 75% full prior to the accident flight) could well have kept the temperature of the wing surfaces at a temperature lower than the external air temperature and thus increased the extent of frozen deposits. However, there was no ground de-anti icing service available at Annemasse, nor was this required since only private flights operated from there.

It was considered that the behaviour of the aircraft just prior to the loss of control “was consistent with a stall due to contamination of the wings with frost or ice - steep uncontrolled banking immediately at lift off and impossibility of establishing an adequate climb speed” despite the use of the correct take off speed and configuration. It was established that the effects of a stall had occurred before the activation of the stall warning device at angles of attack lower than the design threshold for such activation and it was considered that this was “typical of the behaviour of a contaminated wing profile”.

It was noted that the behaviour of the aircraft “was comparable to those of many accidents around the world caused by icing contamination on the wings, leading to a stall then a loss of control on takeoff”. It was also noted that aircraft which have wings with a short chord length or a swept leading edge or which lack leading edge slats are more specifically sensitive to the effects of ground ice and that all three of these characteristics apply to the accident aircraft type.

It was considered that the layer of ice present on the wings was likely to have been thin and therefore difficult to detect with the naked eye, especially as the wings were white. Alternatively, it was considered equally possible that the pilot had detected frozen deposits but considered them to be insufficient to have any consequences for the intended departure.

A pilot who flew the same aircraft type and who knew the accident aircraft pilot told the Investigation that the latter usually put his aircraft in a hangar overnight when he knew that he would be flying the next morning and the weather was cold. At Paris Le Bourget and Geneva, the usual places visited by the aeroplane, he was able to use a dedicated place in a hangar and so only occasionally needed ground de-anti icing before a flight.

The Investigation considered that not all existing recurrent pilot training requirements in respect of wing icing were conducive to the maintenance of adequate risk awareness. The potential for installation of systems for the automatic detection of frozen deposits adhering to wings prior to take off was also noted, as was the ICAO Recommendation in both Annex 14 and in Doc 9640 ‘Manual of Aircraft Ground De-icing/Anti-Icing Operations’ that ground de/anti icing facilities should be available at all aerodromes where there is a risk of such icing.

The Investigation formally concluded that the Cause of the Accident was:

“The pilot’s insufficient appreciation of the risks associated with ground-ice led him to take off with contamination of the critical airframe surfaces. This contaminant deposit then caused the aerodynamic stall of the aeroplane and the loss of control shortly after lift-off.”

The Final Report was published in English translation on 2 May 2014 following initial publication in French on 10 April 2014.

Note: Although the AEA ceased to exist in 2016, the most recent of their publications still contain some pertinent information. Readers are cautioned to validate the recommendations of these guidebook using more current information sources.

and also, especially for GA: