On 29 March 2010, a Raytheon 390 operating a passenger charter flight failed to follow acknowledged taxi instructions in normal visibility at night and entered the departure runway at an intermediate intersection and turned to backtrack against an opposite direction CRJ200 which had just started its take off roll. There was no ATC intervention but the CRJ crew saw the aircraft ahead and were able to stop before reaching it. The Raytheon flight crew stated that they had “encountered considerable difficulties finding out where they were while taxiing” and ended up on the departure runway “without realising it”.

On 29 March 2010, a Raytheon 390 Premier 1A (M-FROG) being operated by a small charter business called The World is Yours failed to taxi for a night departure in normal ground visibility in accordance with its clearance. It entered the departure runway 04R ahead of a Bombardier CRJ200 (EC-HHV) being operated by Air Nostrum for Iberia on a scheduled passenger flight from Nice to Barcelona which had just begun its take off roll. The CRJ crew saw the other aircraft and rejected their take off from a low speed, coming to a stop before reaching it.

An Investigation was carried out by the French Bureau d'Enquêtes et d'Analyses (BEA). It was established that the routes which had been followed by both the aircraft involved were as shown on the annotated aerodrome chart below: 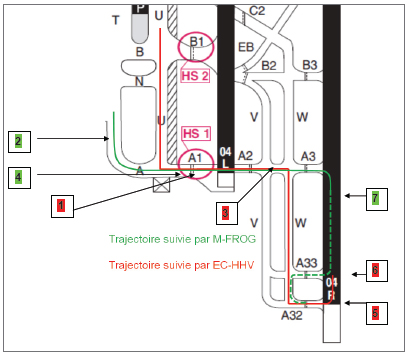 It was established that the Raytheon crew had correctly read back their taxi clearance from their parking position to the holding point for a full length departure on runway 04R but it appeared that they had then become confused at the point where the taxiway centreline on taxiway ‘A2’ indicates two almost simultaneous right turn options, first onto taxiway ‘V’ (not in use and with the centreline unlit) and then onto taxiway ‘W’ (as cleared and with the centreline lit). The centreline lighting leading ahead onto taxiway ‘A3’ was also lit and the aircraft followed that line instead of the right turn into ‘W’ and then continued on ‘A3’ past the co located flashing Runway Guard Lights, marked runway entry Cat 1 holding point and its four embedded and flashing lights and the painted words ‘Runway Ahead’ and onto the runway where they turned right in the apparent belief that they were joining taxiway ‘W’. The crew reported that they “failed to notice that they had passed the holding point ‘A3’ and only realised that they were on the runway when they saw the white edge lighting”.

The Investigation found that at the time of the incident, both the AIP taxi chart (illustrated above) and the proprietary Jeppesen chart based on it failed to correctly depict the detail of the movement area layout at the junction of taxiways ‘A2’, ‘A3’, ‘V’ and ‘W’. This, and the use of lit taxiway centrelines on all taxiways available for use if so cleared (taxiway ‘V’ was not used when - as usual - landings were taking place on runway 04L) was identified as the key factor (apart from adequate crew vigilance) leading to the incursion. The actual layout at the taxiway intersections referred to above is shown below: 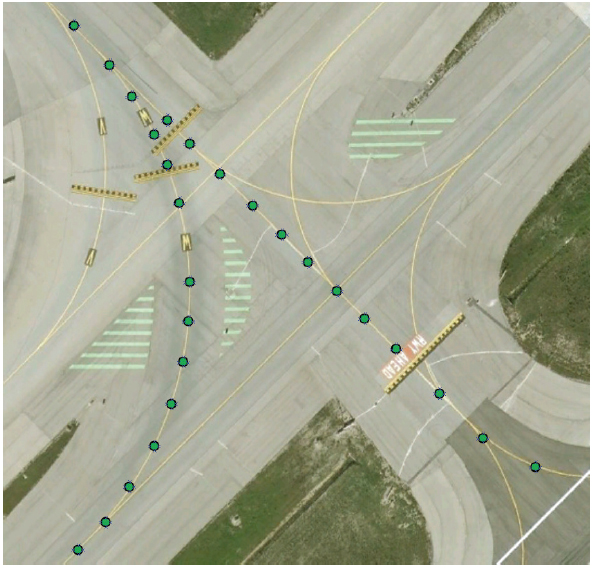 The fact that, in the absence of surface movement radar and any system for detecting potential runway occupancy conflicts or a sufficient line of sight, “ATC was unable to estimate the precise position of the aircraft on the ground at that aerodrome location and was therefore unable to detect an error in the route taken” was also noted.

The formally-stated Conclusion of the Investigation was that “the incident was the result of the crossing of holding point A3 undetected by either the crew of the M-FROG or ATC”.

It was additionally concluded that whilst taxiing, the crew of M-FROG had encountered various problems which had made it difficult to locate their position, including:

It was also concluded that the inability of ATC to detect the conflict and the low height of the Raytheon 390 cockpit also contributed to the incident.

Safety Action take by the Nice Airport Operator following the incident was noted as follows:

The Final Report of the Investigation was issued in a French language version only in May 2011 and is also available here on SKYbrary in an unofficial English language translation.