On 24 February 2008, a Sikorsky S-61N being operated by British International Helicopters on a passenger flight from Værøy to Bødo attempted a visual approach at destination in day IMC and came close to unseen terrain before accepting an offer of assistance from ATC to achieve an ILS approach to runway 07 without further event. None of the 18 occupants were injured.

On 24 February 2008, a Sikorsky S-61N being operated by British International Helicopters on a passenger flight from Værøy to Bødo attempted a visual approach at destination in day Instrument Meteorological Conditions (IMC) and came close to unseen terrain before accepting an offer of assistance from ATC to achieve an Instrument Landing System (ILS) approach to runway 07 without further event. None of the 18 occupants were injured.

The Incident was classified as a Serious Incident by AIBN and an Investigation was carried out. It was established that the initial account of the occurrence by the flight crew had not been accurate. However, the Investigation had access to both a radar recording of the aircraft track and an RTF recording and subsequent interviewing of both the two pilots and the air traffic controller involved provided additional information. The Cockpit Voice Recorder (CVR) fitted had been serviceable but had been overwritten and no Flight Data Recorder (FDR) was installed. The (very experienced) aircraft commander was found to have been PM.

It was noted that the aircraft had been wet leased to Norwegian AOC holder Lufttransport (LTR) because their own helicopter was on maintenance. However, the lease period approved by the Norwegian CAA was found to have expired a week before the event.

It was confirmed that the aircraft had been operated in contravention of both the applicable minimum altitude for all Visual Flight Rules (VFR) flight (500ft) and the applicable minimum in-flight visibility for SVFR (800m) and that although weather conditions in which visual flight might become impossible in the Bodo area had not been included in the TAF, the Meteorological Terminal Air Report (METAR) issued 15 minutes prior to the attempted visual approach indicated weather conditions at the airport which were incompatible with a visual approach taking into account the prevailing and applicable regulations.

It was found that the aircraft was fitted with a permanently installed Global Positioning System (GPS) system in addition to the main ground-based navigation systems. It was noted that the GPS display was mounted on the lower part of the mid console and therefore difficult to use as a source of direction and distance to a selected navigation point when looking outside the aircraft for visual reference at very low altitude, although input from it could be selected to the CDI on both pilots’ HSIs as an alternative to (but not at the same time as) a display based on terrestrial navigation sources. This GPS system was found to have been used for primary navigation whilst purporting to be conducting flight under SVFR but the aircraft had failed to intercept the extended centreline of the runway and had instead drifted further and further to the north of it into proximity with high ground.

It was found that when the ATCO on duty had realised that the intended SVFR approach had failed and that the aircraft was being flown towards rising terrain, they had proposed an avoidance climb and turn which was eventually successfully followed. The rest of the approach had then taken place in IMC from an altitude of 1500 ft as “a combined radar-guided ILS approach with good support from the air traffic controller”. The Investigation was told that flight on the ILS was observed to have been "wobbly" by the air traffic controller.

The track of the aircraft during its close encounter with terrain is reproduced from the Official Report below which shows times in ‘Z’. The aircraft finally landed on runway 07 at 1452 Z. 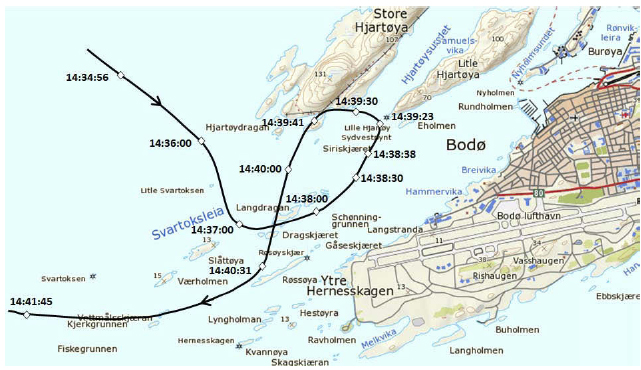 Track flown during initial attempt at an approach to Runway 07

The Final Report of the Investigation Report SL 2011/15 was published by AIBN on 7 July 2011. It concluded that the aircraft had been flown in accordance with declared VFR / SVFR in IMC as well as ”at an extremely low altitude in an unknown area, without (the flight crew) knowing exactly where they were in relation to the terrain”. It was concluded that the crew had lost their orientation and navigated towards rising terrain at low altitude and that only due to “an observant and competent air traffic controller” were the crew directed out of the serious situation they were in and on to an ILS approach from which there was a subsequently successful landing.

Two Safety Recommendations were made:

That the CAA-N with a legal basis in Licensing Regulations, article 9, cf. article 10, no 2 requires a leased company to carry responsibility for performing and documenting risk assessment and implementing a satisfactory safety compensation plan for the operation. (SL No. 2011/14T)

That British International Helicopters sets requirements related to qualifications and training and gives a more detailed safety briefing to visiting crews for each new detachment of leased companies, with special emphasis on climatic conditions, weather conditions, visibility conditions, helicopter ILS and any alternative procedures, based on the company risk assessment. (SL no. 2011/15T)