On 26 January 2020, a Sikorsky S76B on a night VFR passenger flight was observed to emerge from low cloud shortly after ATC had lost contact with it following a report that it was climbing to 4000 feet. It had then almost immediately crashed into terrain, destroying the aircraft and killing all its occupants. The Investigation found that the helicopter had been serviceable and that the pilot had lost control after intentionally continuing into IMC and then attempting to climb which resulted in spatial disorientation. The aircraft operator’s inadequate risk management was found to have contributed to the accident outcome.

On 26 January 2020, a Sikorsky S76B (N72EX) being operated by Island Express Helicopters on a non-scheduled night VFR passenger flight from Santa Ana (SNA) to Camarillo (CMA) in marginal weather conditions and carrying eight passengers was seen to emerge from low cloud in a left turn 1-2 seconds before an impact which destroyed the helicopter and killed all nine occupants.

An Investigation was carried out by the NTSB.

It was noted that the 50 year-old pilot had a total of 8,577 hours flying experience of which included 1,250 hours on type and a total of just under 7 hours instrument flight time. He had recorded one regulatory violation from five years earlier which had involved operation in Class ‘B’ airspace without clearance and adequate awareness of SVFR (and VFR) minima. He had been employed by Island Express since 2011, initially flying the Airbus AS 350 before converting to the S76 in 2014. In 2016, he had been appointed Chief Pilot and become an instructor and examiner on the S76.

It was established that after a VFR departure from Santa Ana where the weather was reported as a visibility of 4 miles in mist below a 1000 feet agl cloudbase, the helicopter flew not above an altitude of about 1,700 feet and generally between 400 and 600 feet agl. After thirteen minutes, the flight reached the edge of Burbank (BUR) CTZ having followed a north easterly track along the Interstate 5 highway towards its junction with the US 101 highway. The pilot requested a SVFR clearance through Burbank Class ‘C’ airspace turning west to track along the line of US highway 101 (see the illustration below). 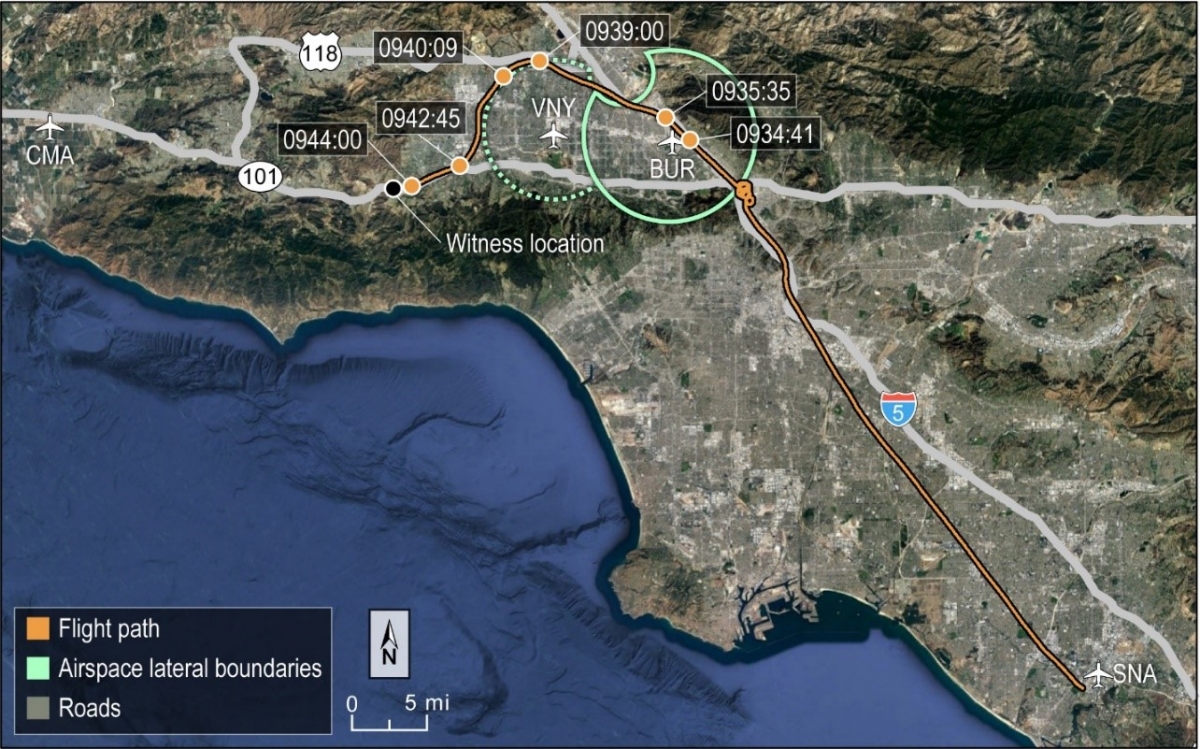 The ground track of the accident flight. [Reproduced from the Official Report]

At that time, Burbank, which is at an elevation of 778 feet amsl, was reporting a visibility of 2½ miles and a ceiling of 1,100 ft agl against the minimum requirement for a visibility of at least 3 miles. The controller advised the pilot to remain clear of Burbank airspace due to traffic and on request from the pilot advised that the last report of the cloud tops was an altitude 2,400 feet. For the next 11 minutes, the helicopter orbited as required to the southeast of the airport near to US Highway 101 at altitudes varying between about 400 and 600 feet agl maintaining a groundspeed of between about 40 and 70 knots. During this time, the Burbank TWR controller advised the pilot that because of multiple departures from Van Nuys (VNY), a clearance to cross by continuing to follow the Interstate-5 highway before crossing Van Nuys airspace to begin heading west towards destination could be given and the pilot responded with “no problem”.

A SVFR clearance was subsequently provided as per expectation for the flight to follow the Interstate-5 northwest through Burbank airspace with the Van Nuys weather reported to be similar to that at Burbank. Just over two minutes later when the helicopter was about a mile from Burbank airport, the Pilot transmitted that he would like to follow SR 118 highway around Van Nuys (see the illustration above) and then pick up the US 101, which was acknowledged and the flight transferred to Van Nuys TWR. The pilot reported being at an altitude of 1,400 feet and requested an SVFR transition (actually the flight was at about 1,320 feet (520 feet agl)). The TWR controller cleared the flight to transition to Van Nuys Class ‘D’ airspace at or below an altitude of 2,500 feet following the SR 118 highway. Once past the northern limit of the Van Nuys CTZ, the helicopter left the SR 118 and began to track around the western edge of the zone towards US Highway 101. The Van Nuys TWR controller then instructed the pilot to change to the Southern California TRACON (SCT) frequency and on checking in there, the pilot advised the radar controller that the flight was heading for Camarillo in “VFR conditions” at an altitude of 1,500 feet (equivalent to 550 feet agl).

The controller asked if the pilot was planning to “stay down low....all the way to Camarillo” and on receiving an affirmative response advised that radar and radio contact with the flight would probably soon be lost and instructed the pilot to “squawk VFR” (code 1200) and contact Camarillo TWR once closer to the airport. Shortly after this, the flight reached the US 101 and turned right to follow it west toward Camarillo at an altitude of about 1,420 feet (550 ft agl) making about 140 knots groundspeed. A witness who saw the helicopter flying west at this time reported “variable fog and overcast cloud conditions that varied with ‘heavy low clouds’ in some places and other areas where the cloud base was higher”. She also reported having seen the helicopter flying “below or at the cloud line” before it “disappeared into heavy clouds” which she described as a “thick wall”. Based on ADS-B data, the helicopter was at this time at the point marked on the illustration above as ‘Witness Location’ and was at an altitude of about 1,370 feet, equivalent to 450 feet agl.

Soon after this witness sighting (and at the position timed at 0944:34 UTC on the illustration below), the pilot called on the SCT frequency to say that the flight was “gonna go ahead and start our climb to go above the, uh, layers, and, uh, we can stay with you here” and the helicopter immediately began to climb at around 1,500 fpm, entering a gradual left turn whilst still remaining generally over the US 101. Another SCT controller (who had taken over the position from the previous one) responded by asking the pilot his position and his response that he was just west of Van Nuys prompted a request to “ident”. After noting that the flights transponder code was showing VFR (1200), the controller asked the pilot if he was requesting flight following (a type of ATC radar advisory service), to which the pilot replied “yes sir”.

As the helicopter continued its climb reaching a maximum of 2370 feet amsl - around 1600 feet agl - the left turn steepened and it began to turn away from US 101 and descend at an increasingly rapid rate. As this descent began, the SCT controller asked the pilot for his intentions and received the response that the flight was “climbing to 4,000 feet amsl”. The controller asked the pilot his plans once reaching that altitude but received no response. The accident impact occurred just one minute after the climb had commenced with the final ADS-B data point showing 180 feet agl about 500 feet southwest of the impact point which was at an elevation of approximately 1,100 feet amsl in hilly terrain. A witness close to the impact site reported first hearing the helicopter and then seeing it emerge from the cloudbase “in a left-banked descent about 1 or 2 seconds before impact”. 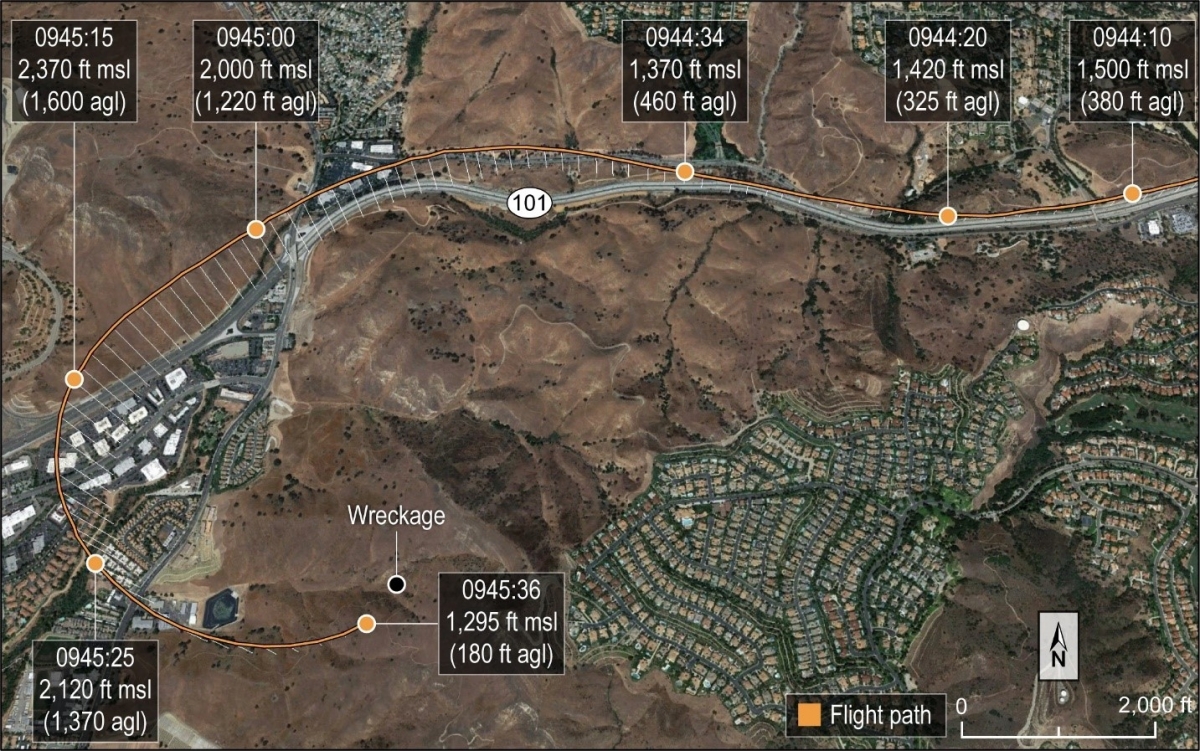 The flight path including the final minute with the climb then transitioning to a steep descent. [Reproduced from the Official Report]

The Investigation gathered comprehensive information on the nature of Island Express’ VFR-only flight operations. This led to an evaluation of the following ‘Safety Issues’:

The pilot completed a company flight standard flight risk analysis form about two hours before the accident flight’s departure. Based on the form’s risk scoring criteria, the pilot’s score for the accident flight was within the company’s low-risk category. However, updated weather information available at the time the accident flight departed included conditions that meant that the form’s risk items would have scored differently and would have required the pilot to seek input from the Director of Operations and gain approval for an alternative plan. However, company guidance as to whether the accident pilot was expected to complete an updated form (which he did not do) was unclear.

At the time the pilot took action to initiate a climb, the helicopter had already begun penetrating cloud. Although the pilot’s adverse weather avoidance training had emphasised avoiding entry into IMC by slowing the helicopter and manoeuvring or landing, there was no evidence that he attempted to do either.

As the helicopter climbed rapidly into cloud and IMC while in a gradual left turn, the pilot’s associated loss of outside visual references made him susceptible to vestibular illusions that can lead to spatial disorientation.

The pilot’s continuation of the accident flight into IMC was inconsistent with his typical judgment and decision-making behaviour and was likely influenced by his self-induced pressure, lack of an alternate plan and plan continuation bias.

The company had an SMS that was neither required by the Federal Aviation Administration (FAA) nor part of the company’s FAA approved or accepted programmes. Although the company used some SMS tools, it did not implement the entire SMS program it had obtained and did not perform any safety assurance evaluations, such as those that could have ensured the effectiveness of the flight risk analysis forms.

Had Island Express’ SMS been required by the FAA, it would have been subject to FAA oversight to inspect the SMS for alignment with FAA objectives and to provide feedback to help the company implement the entire program.

Flight simulation devices can present pilots with representations of deteriorating weather conditions that cannot be realistically duplicated during flight training conducted in helicopters in visual meteorological conditions. The use of simulation devices during scenario-based helicopter pilot training has the potential to improve pilots’ abilities to accurately assess weather and make appropriate weather-related decisions.

OFDM involves the recording and analysis of flight-related information to help pilots, instructors, or operators improve performance and safety. An OFDM program, which can be integrated into an SMS, has the potential to provide important information regarding pilot performance during flights, which may be particularly beneficial for operators like Island Express that conduct single-pilot operations and, thus, have little opportunity to directly observe their pilots in the operational environment.

Certain circumstances of this accident could not be conclusively determined, including the visual cues associated with the adverse weather and the pilot’s focus of attention in the cockpit following the flight’s penetration of clouds and entry into IMC. A crash-resistant flight recorder system capable of capturing audio and images could have provided this valuable information, possibly enabling the identification of additional safety issues and the development of safety recommendations to prevent similar accidents.

The Probable Cause of the accident was determined by the Board as “the pilot’s decision to continue flight under visual flight rules into instrument meteorological conditions, which resulted in the pilot’s spatial disorientation and loss of control”.

The Final Report of the Board was adopted on 9 February 2021 and subsequently published.