On 18 May 2011, a Saab 340 crew attempted to continue a climb to their intended cruising level in significant airframe icing conditions at night before belatedly abandoning the attempt and descending to a lower level but one where their aircraft was nevertheless still rapidly accumulating ice. They were unable to recover control after it stalled and a crash into terrain below followed. The Investigation attributed the accident to lack of crew understanding of the importance of both the detection of and timely and appropriate response to both significant rates of airframe ice accumulation and indications of an impending aerodynamic stall.

On 18 May 2011, the crew of a Saab 340A (LV-CEJ) being operated by Sol Airlines on a scheduled domestic passenger flight from Neuquén to Comodoro Rivadavia in night Instrument Meteorological Conditions (IMC) encountered airframe icing of greater severity than expected whilst climbing to the planned cruise altitude of FL190. Despite initiating a descent, the aircraft stalled in continuing icing conditions as they were unable to recover control. The aircraft crashed into the terrain below, caught fire and was destroyed. All 22 occupants were killed.

An Investigation was carried out by the Argentinean Civil Aviation Accident Investigation Board (JIAAC). The FDR and CVR were both recovered and successfully downloaded and provided data essential to establishing the circumstances which led to the accident.

It was found that the 45 year-old Captain had accumulated over 2000 hours flying time on type and had previous experience on other twin turboprop aircraft and a total of 6902 flying hours. The 37 year-old Co-Pilot had accumulated 1340 hours in total including 285 hours on type, having recently become a pilot with the Operator after previous employment with them as a maintenance technician. He "had had only been approved to fly without an instructor one month prior to the accident". The effect of the obviously large difference in flying experience between the two pilots was noted as likely to have been operationally significant.

The Investigation found no evidence that any airworthiness deficiencies had any bearing on the accident, although it did find that the aircraft involved had not been in compliance with extant Airworthiness Directives unrelated to the accident. It was noted that the accident aircraft did not have the optional modification to install an 'Ice Speed System' - developed in Canada in recognition of the greater risk of exposure to significant airframe icing conditions - incorporated. It was found that after departure from Neuquén, the aircraft had never reached the intended and cleared cruising level, FL190, and noted that, with the AP engaged throughout and having reached a maximum of FL178 using the Operator's standard power management procedure - the 'Constant ITT' method, the crew had not then (and had not earlier) increased power to the maximum permitted level in order reach FL190. FDR data showed that there had been no significant changes in climb power prior to the aircraft reaching FL140. It was noted that "the crew were aware of the formation of ice on the aircraft from the beginning" and that "anti-ice protection systems were activated upon detection of icing conditions" and functioned normally. However, the selection of engine anti-ice to 'on' was not followed by a change in AP mode from CLIMB LOW' to 'IAS', the latter being the only mode which permitted AP use to continue, but the effect of this was that the IAS achieved as climb performance steadily reduced dropped below those specified in the AOM.

Some 24 minutes after take off it became clear that it was not practicable to continue climbing any further and, having levelled off at FL178, the crew "used V/S mode in order to increase speed" but this did not have the desired effect and the aircraft began to approach an aerodynamic stall, with activation of the stick shaker following. With the weather radar indicating that that the aircraft was about to exit cloud and a conversation with the pilot of another Company aircraft routing in the opposite direction at FL140 who reported having no icing problems, the crew response after remaining at FL178 for approximately 9 minutes, was to begin a descent to FL140. This was accomplished with the AP still engaged in V/S mode set to - 750fpm. Airspeed in this descent increased to "an average of 173 knots" with power set to 58%. The slightly positive vertical pitch during this 5 minute descent "led to ice forming on the bottom part of the airframe" which increased the weight and adversely affected the aerodynamic qualities of the aircraft. FDR data suggested that towards the end of the descent, "icing conditions rapidly worsened" and as a result, the aircraft "rapidly lost speed on levelling at FL140 despite power being increased". When buffeting began at an indicated speed of 145 knot indicating proximity to an aerodynamic stall, the crew attributed it to propeller ice accumulation and responded by increasing the propeller RPM to maximum. The aircraft remained in buffet for 13 seconds as the indicated speed slowly decreased and the stick shaker was activated at an airspeed of 137 knots.

Then, uncommanded disconnection of the AP occurred and "the aircraft commenced a series of uncommanded rolls with a nose down attitude". The crew were unable to level the wings or alter the pitch attitude even though they performed actions prescribed for recovery and it was concluded by the Investigation that the reason for this was "because the control surfaces (ailerons and elevators) were not sufficiently aerodynamic as a result of severe icing". It was then apparent from FDR data that the crew had then induced - and entered into - a secondary stall - which caused further stick shaker activations. A sustained and uncontrolled descent began with the aircraft remaining fully stalled. It was considered, "based on the aircraft's impact", that a sequence of uncontrolled rolls accompanied by a nose down attitude continued until impact.

The Investigation also found relevant deficiencies in VHF communications coverage along the route being flown and specifically in the area where the accident occurred. It also noted that according to the meteorological information provided prior to take off, only light icing was forecast. The lack of a current forecast in this particular case was considered to have been attributable to systemic weakness in the provision of aviation en route forecasts exacerbated by a lack of awareness of their potential significance by both dispatchers and pilots.

An infrared weather satellite picture of the area where the accident occurred at the time it occurred is reproduced below. 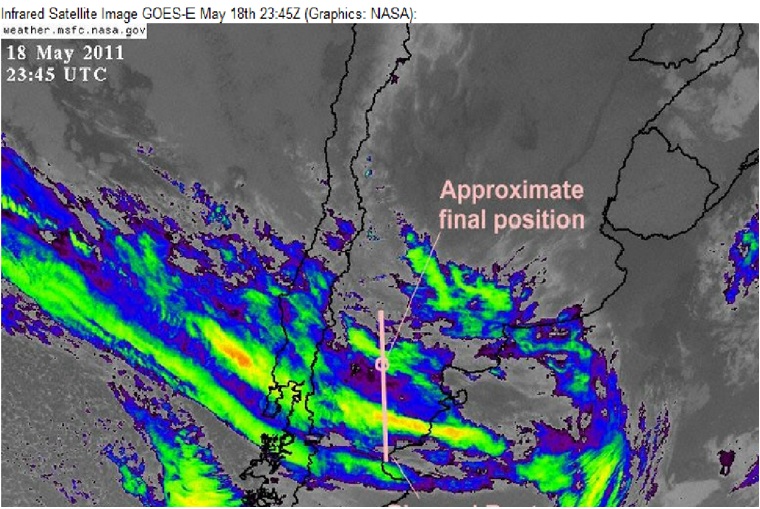 The formal documentation of the Cause of the accident was as follows:

During a commercial, domestic passenger flight, while cruising, the crew lost control of the aircraft, which uncontrollably impacted the ground due to severe ice formation caused by the following factors:

A number of "Potentially Dangerous Conditions" that were not causal were also identified as follows:

A total of 18 specific and directed Safety Recommendations were made as a result of the Investigation as follows:

The Safety Recommendations section of the Final Report also included a generic recommendation directed to the ICAO AIG (but proposing that they delegate implementation to Aviation Authorities, Aircraft Manufacturers, Pilot Training Centres and Air Operators) that enhanced training of pilots should be implemented in respect of "the recognition of and recovery from stalls and upsets ... alongside the ... systems of warning, protection and automation".

The Final Report in Spanish was published by the JIAAC on 10 March 2015 and an Unofficial English Translation was subsequently made available by the Swedish Accident Investigation Authority.