On 13 June 2013, a rushed and unstable visual approach to Marsh Harbour by a Saab 340B was followed by a mishandled landing and a runway excursion. The Investigation concluded that the way the aircraft had been operated had been contrary to expectations in almost every respect. This had set the scene for the continuation of a visual approach to an attempted landing in circumstances where there had been multiple indications that there was no option but to break off the approach, including a total loss of forward visibility in very heavy rain as the runway neared.

On 13 June 2013, a Saab 340B (C6-SBJ) on an IFR Flight Plan and being operated by SkyBahamas Airlines as SBM 9561 on a scheduled international passenger flight from Fort Lauderdale FL USA to Marsh Harbour Bahamas bounced several times as it tried to land on runway 09 at its destination after a daylight visual approach before departing the side of the runway just before its end and damaging one runway edge light before coming to a stop. The 24 occupants were uninjured and evacuated using the main passenger door. The aircraft sustained substantial damage and was declared a hull loss. 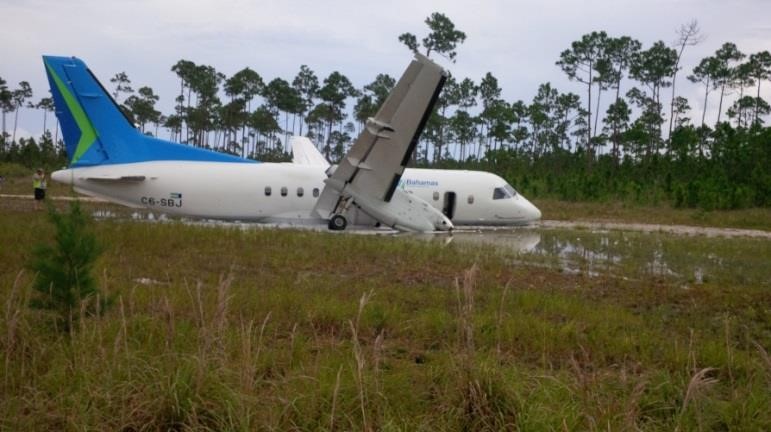 An Investigation was carried out by the Bahamas Air Accident Investigation Department (AAID). The FDR and 2 hour CVR were recovered and downloaded. The recording of some relevant flight control positions on the FDR was found to have been erroneous with the possible source of the problem being “issues with the associated position sensors on the aircraft” rather than the FDR itself. All the useful CVR data could be successfully read.

It was found that the 30 year-old Captain had 8,500 hours total flying experience which included 4,700 hours on type. The flying experience of the 21 year-old First Officer, who had been PF for the flight, was recorded as “not known”.

The crew had received pre-flight weather information from the Fort Lauderdale TWR before taking off on the 44 minute flight to Marsh Harbour. Scattered heavy rain showers and the possibly of thunderstorms with rain and associated moderate to severe turbulence were forecast for the north western Bahamas where the flight destination was located.

After cancelling IFR as the destination neared, FDR data showed that the aircraft had been positioned on final approach to the 1,860 metre-long destination runway 09 and the flaps were extended to 15° whilst the aircraft was recorded as flying at level at 1,300 feet with approximately 4.2 nm to run. A few seconds later, still level at 1,300 feet, the AP was disconnected at 166 KIAS and the final descent commenced. The landing gear was selected down and subsequently reached the down and locked position as the aircraft passed 730 feet and at this point, landing flap - 20° - was selected with approximately 1.9 nm to run. Approaching the runway threshold, the power levers were retarded and engine torques reduced to approximately 20% as the aircraft crossed the threshold at 50 feet agl at 171 KIAS with reduced visibility in a rain shower. The first runway contact did not occur until 14 seconds after crossing the threshold and occurred at 130 KIAS and with a recorded ‘vertical load factor’ of at or above 2.16g. The aircraft then bounced to approximately 15 feet agl before a second runway contact 5 seconds later at or above 3.19g. This occurred with a pitch attitude of -1.8° at 106 KIAS and it bounced again and made a third runway contact at or above 3.66g at 98 KIAS with pitch attitude -2.2° after 7 seconds airborne. The aircraft finally settled on the runway after the third bounce with damage to the right wing and right hand engine and propeller which rapidly stopped. The aircraft veered off the runway to the right at an approximate 40° angle just 17 metres from the runway end at 44 KIAS and eventually came to a full stop a few seconds later.

There was no record on the CVR of either pilot ordering the cabin crew to evacuate or of the evacuation checklist being conducted. However, an uneventful evacuation by all occupants via the main passenger door followed - the extent of the damage on the right hand side meant that evacuation in that direction was not considered. The extensive damage to the aircraft was documented in detail during the Investigation and collectively led to the aircraft being declared a hull loss. No conclusion as to its potential relevance to the accident was drawn but it was noted during examination of the flight deck that the Captain’s seat height adjustment was unserviceable which meant that it was fixed at its lowest position.

An examination of data from the CVR showed that en-route, the pilots had continued as earlier in the flight with “non-essential conversation” and had not briefed the approach or discussed the weather to be expected at Marsh Harbour or any alternate to be used if weather conditions there deteriorated. The Approach Checklist appeared not to have been run and there was no evidence at any point that the principles of CRM had been followed. It was clear from the recorded conversation that the Captain was “adamant about landing at all costs” despite both pilots’ awareness of a thunderstorm over the aerodrome and remarked at one point that they should try to “get in before it got worse”. When the First Officer asked the Captain for the ‘Before Landing’ Check, it was read so quickly that “it could not be interpreted from the CVR” and there was no opportunity for responses. In particular, the call to advance the propeller rpm was completely omitted and this setting remained incorrect until the crash sequence. It was observed that had a go around been attempted, this omission “could have had catastrophic consequences”.

The final stages of the approach appeared to have involved both pilots “stating at differing times that they had the runway in sight, then they lost sight of it, then they had it again and then lost it again” with this process repeated several times up to the point of first touchdown. It was certainly clear “neither pilot definitively had the runway in sight” on short final and that both had been aware of the weather problems ahead before reaching 500 feet. This had given them the opportunity to break off the approach and “divert to another airport with VFR weather or hold at a predetermined position until (Marsh Harbour) had cleared enough to attempt a landing”.

Instead, it was found that almost immediately after the First Officer had lost sight of the runway due to heavy rain at around 500 feet, the Captain’s windshield wiper had jammed at one side. A number of exchanges of control had then followed beginning with the Captain, despite his lack of a windshield wiper, briefly taking control before handing it back to the First Officer because he couldn’t see the runway either. No further sighting of the runway was definitive and as touchdown became imminent, the rain intensity was such that even with a functioning wiper, the First Officer could not see the runway. It was evident that by this time the aircraft had touched down for its first bounce and that “the atmosphere in the cockpit at this time was chaotic as the control wheel was being exchanged between the (two pilots) based on who had sight of the runway at the time”.

Overall, it was found that despite the fact that “airspeed during the approach was unstable and non-standard, a go around or diversion was neither considered nor attempted (and) there was a constant battle between the crew to slow down, or hurry up, or put in flaps to slow down” with all of these non-standard procedures representing an attempt to ‘beat’ the worsening weather and land. It was considered that the fact that FDR data showed that there had not been any “aileron or elevator control input by the crew during or after the touchdown” further confirmed that “during the bounces and crash sequence neither pilot had positive control of the aircraft”. No evidence from the recorded data available was found to even suggest that wind shear might have had a part to play in the circumstances of the accident either before or after the first runway contact.

Overall, the Investigation concluded that “complacency was the order of the day” with the crew involved having demonstrated “no crew resource management” and “no adherence to company standard operating procedures”. Sterile flight deck procedures had been disregarded with often continuous non-essential conversation at all stages of the flight.

The Investigation determined that the Probable Cause of the accident was “the decision of the crew to initiate and continue an instrument approach into clearly identified thunderstorm activity over the landing field during landing, resulting in a loss of control of the airplane from which the flight crew was unable to recover and a subsequent collision with obstacles and terrain which followed during the runway excursion”.

The Final Report of the Investigation was released on 5 May 2017.