On 8 November 2012, the crew of a Saab 340 advised destination ATC at Newcastle in daylight hours that they were 'visual' and were so cleared. The aircraft was then observed to turn towards the lights of an industrial complex 6nm from the airport and descend and ATC intervened to provide guidance to final approach. Investigation found that the experienced Captain was guiding the First Officer, who had gained his professional licence 10 months earlier, towards what he had mistaken for the runway. Descent, perceived by the Captain as on 'finals', continued to 680 feet agl before a climb commenced.

On 8 November 2012, the crew of a Saab 340B being operated by Regional Express on a scheduled passenger flight from Sydney to Newcastle lost positional awareness in day Visual Meteorological Conditions (VMC) after requesting and being granted visual positioning to the landing runway at destination. ATC observed that the aircraft was descending away from the expected approach and alerted and then assisted the crew to position to the approach for which they had been cleared.

An Investigation was carried out by the ATSB. It was noted that Newcastle civil airport is actually a terminal on the Williamtown RAAF base and that ATS is provided by military personnel.

It was found that the First Officer, who had 224 hours on the aircraft type and 411 hours in total and had been issued with his CPL 10 months earlier, had been PF for the sector. The Captain was found to have obtained a majority of his 12386 hours on the aircraft type. Both had flown to Newcastle before, although the First Officer had only done so in daylight. Although daylight continued to prevail during the occurrence, it was quite near to nightfall and the conditions were characterised by the Investigation as 'low light'.

It was established that after reporting 'visual' to destination APP on approaching from the south, the aircraft had been cleared for a visual approach to right base on runway 12 and instructed to contact TWR when 10nm from the aerodrome. This was done and both TWR and APP controllers continued to monitor the progress of the flight on radar.

The Captain reported that he had observed buildings which he believed were at the airport and had begun to provide tracking guidance to the First Officer. On that basis, he advised a left turn onto what he believed was a right hand downwind leg (see the track flown on the diagram below) and a descent to the promulgated circuit height of 1500 feet. The location identified by the Captain as the airport was in fact a coal loading and storage facility some 6nm south west of the airport. The First Officer advised the Investigation that he had not been confident that he was observing the runway at Williamtown and also recalled seeing the Williamtown DME showing the aircraft to be 6nm away and mentioning this to the Captain.

The TWR controller observed through binoculars that "the aircraft was manoeuvring at a greater distance than usual from the runway". At about the same time, the APP controller "became concerned about the aircraft's position" and prompted the TWR controller to query the crew about their intentions. In reply to the TWR query as to whether they were still visual, "the crew responded that they had just ‘lost’ the runway and were continuing the right turn".

Flight Data Recorder (FDR) data showed that the aircraft then began a shallow descent from 1,500 feet on a westerly heading before turning right at which point the configuration of the aircraft for landing was commenced. On completion of the right turn onto "base leg", the First Officer "was unable to resolve his confusion about the aircraft’s position and handed control to the Captain".

The Captain told the Investigation that after he had taken control, the runway was not visible but that he "had formed a strong belief that they were in the airport environment". The First Officer stated that after handing over control, he had become aware "having observed the lighting and width of the coal loading and storage facility and noted their distance from the airport was greater than expected" that the aircraft was not correctly positioned.

Both controllers reported realising that the crew had probably lost situation awareness and the TWR controller offered to increase the intensity of the runway approach lighting and advised the crew that they were 6 nm south-west of the airport tracking east. Recorded radar data also showed similar tracking which was taking the aircraft towards the coal facility.

In response to the TWR advice of position, the Captain immediately requested radar vectors but as the TWR controller was not qualified to provide these, a left turn onto heading 020° was "suggested". At about the same time, the aircraft "turned onto a southerly heading towards the boundary of controlled airspace and descended to 680 feet". The APP controller advised the TWR controller to instruct the aircraft to climb and advise of an aircraft 5nm ahead outside controlled airspace. A climb to about 900 feet was made but the aircraft was not reconfigured.

The two controllers could both see the aircraft and decided to keep it on the TWR frequency which precluded the issue of radar vectors. TWR advised the aircraft to turn north to approach the airport from the south but still could not see the runway and requested further guidance. The TWR controller selected the runway lighting to maximum brightness and continued to provide position information until he was satisfied that the crew had runway 12 in sight. An uneventful landing was subsequently accomplished some 14 minutes before official night.

The Investigation noted that various radio navigation aids were available at Williamtown, including an Instrument Landing System (ILS) on runway 12, a Distance Measuring Equipment (DME) and an Non-Directional Beacon and that all were serviceable at the time of the occurrence. Area Navigation Systems Non Precision Approach Procedures were also available to both runway 12 and runway 30. The AIP permitted visual approaches provided that they were not conducted beyond 30nm of the airport or in an in-flight visibility of less than 5000 metres. The prevailing weather conditions had been CAVOK.

The extant guidance to ATC in the event of situations such as the one investigated was noted to be contained in a Checklist which the controllers had referred to. The controllers reported that they had considered declaring an emergency as mentioned in this source, but that once the navigation error had been corrected, such action was no longer appropriate. It was also noted that the AIP requires that a 'Safety Alert' must be issued if ATC "become aware that an aircraft is in a situation that will place it in unsafe proximity to terrain, obstructions or other aircraft", noting that "the issue of further safety alerts may be discontinued if the pilot advises that action is being taken to resolve the situation". Issue of a safety alert requires that the transmission begins with the prefix ‘Safety Alert’ and that it should be followed by the appropriate hazard detected. 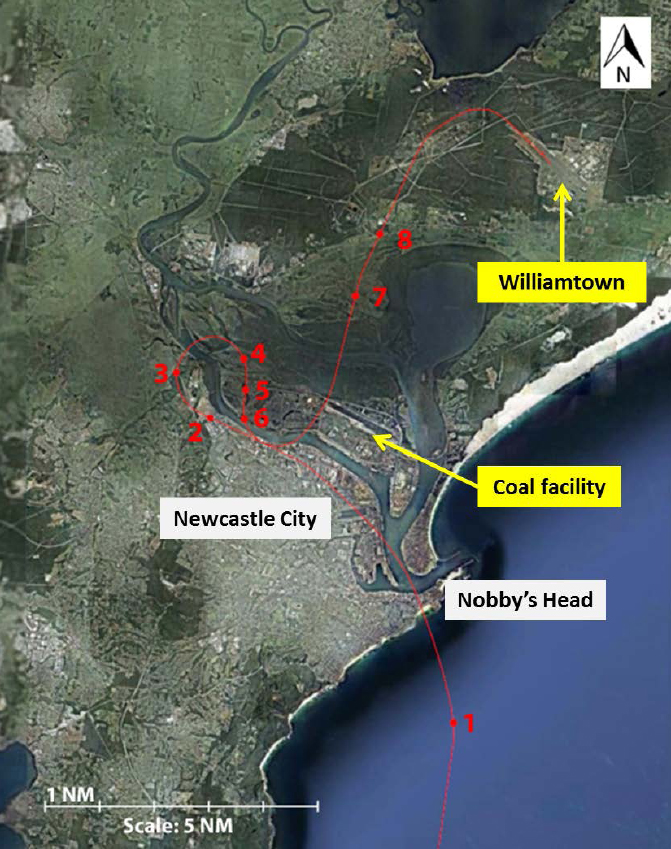 The Investigation considered that, although the Captain stated that he felt that 'ongoing discomfort' caused by prior illness had "played a part in his reduced attentional capacity and fatigue", overall, "there was insufficient evidence available to determine the extent of…illness or fatigue at the time of the occurrence".

It was noted that once ATC detected the unusual tracking of the aircraft, it had been initially kept on the TWR frequency because the crew had confirmed they were visual, the TWR controller had the aircraft in sight and because doing so minimised crew distraction and the creation of increased crew workload. It was further noted that although when the crew then advised that they were still having difficulty sighting the runway, they were advised to "climb" but that this transmission was not prefixed with 'Safety Alert' and did not include an instruction to climb to the applicable Minimum Safe Altitude of 2100 feet. It was considered that these inclusions "may have more promptly enhanced the crew’s situation awareness and alerted them to the potential risk of being at low level in that area".

The formal Conclusion of the Investigation was that "in the low light conditions and using the visual cues available, the Captain incorrectly identified a coal loading and storage facility as the airport environment and manoeuvred the aircraft for an approach to that location".

The Investigation noted a number of other events both in Australia and elsewhere in which aircraft had inadvertently landed or commenced approaches to airports other than those they had been cleared to do so, mainly at night. These included a 2007 event on approach to Dublin, Ireland at night (MD83, vicinity Dublin Airport, Ireland, 2007 (CFIT HF) and two more recent cases in the USA currently under investigation by the National Transportation Safety Board (USA) (NTSB).

Safety Action taken as a result of the occurrence was noted to have been:

The Final Report was published on 13 March 2015. No Safety Recommendations were made.