On 17 March 2017, uncommanded engine indications on a Saab 340B en route to Sydney were followed by vibration of the right engine after which, as the crew commenced right engine shutdown, its propeller assembly separated from the engine. A PAN was declared and the flight subsequently reached Sydney without further event. The Investigation found that the propeller gearbox shaft had fractured because of undetected internal fatigue cracking in the shaft. Applicable in-service shaft inspection procedures were found to be inadequate and mandatory enhancements to these procedures have since been introduced.

On 17 March 2017, the crew of a Saab 340B (VH-NRX) being operated by Regional Express (Rex) on a domestic passenger flight from Albury to Sydney as RXA768 in day VMC were in the process of shutting down the malfunctioning right hand GE CT7-9B engine when its propeller detached from the engine approximately 10nm from destination. A PAN was declared to ATC and the flight was completed without further event.

The aircraft at Sydney after the flight with the point of separation shown close up and arrowed. [Reproduced from the Official Report]

Recorded flight data showed that about 10 minutes prior to the separation, when about 55 nm southwest of the intended destination, the flight crew had observed abnormal fluctuations on the right hand engine torque gauge and had responded by beginning to correctly action the relevant checklists. Minor vibrations began to occur in the same engine and gradually worsened to the extent that they were visually evident to the First Officer. At this point, it was decided to shut the engine down and as this was being done the propeller separated from the aircraft. A PAN was declared to ATC, the engine shutdown was completed and the remainder of the flight was completed without further event. An inspection of the aircraft after flight showed that the loss of the propeller assembly had occurred because the Propeller Gear Box (PGB) propeller shaft had fractured. Four days later, the propeller assembly was found in a densely forested area about 10nm south west of Sydney airport with the flange section of the fractured shaft attached (see the illustration below).

The separated propeller - note that the right hand picture was taken when attachment nuts were in the process of being removed in order to release the flange. [Reproduced from the Official Report]

It was found that the PGB involved had been installed with a Dowty propeller to the right hand engine on another company aircraft after import to Australia from an overseas operator 18 months earlier. After 8 months, this engine has then been moved to the right hand position on the current aircraft and had remained there with the same propeller attached since.

The relationship between the PGB as a whole and the part of it found attached to the recovered propeller is illustrated below: 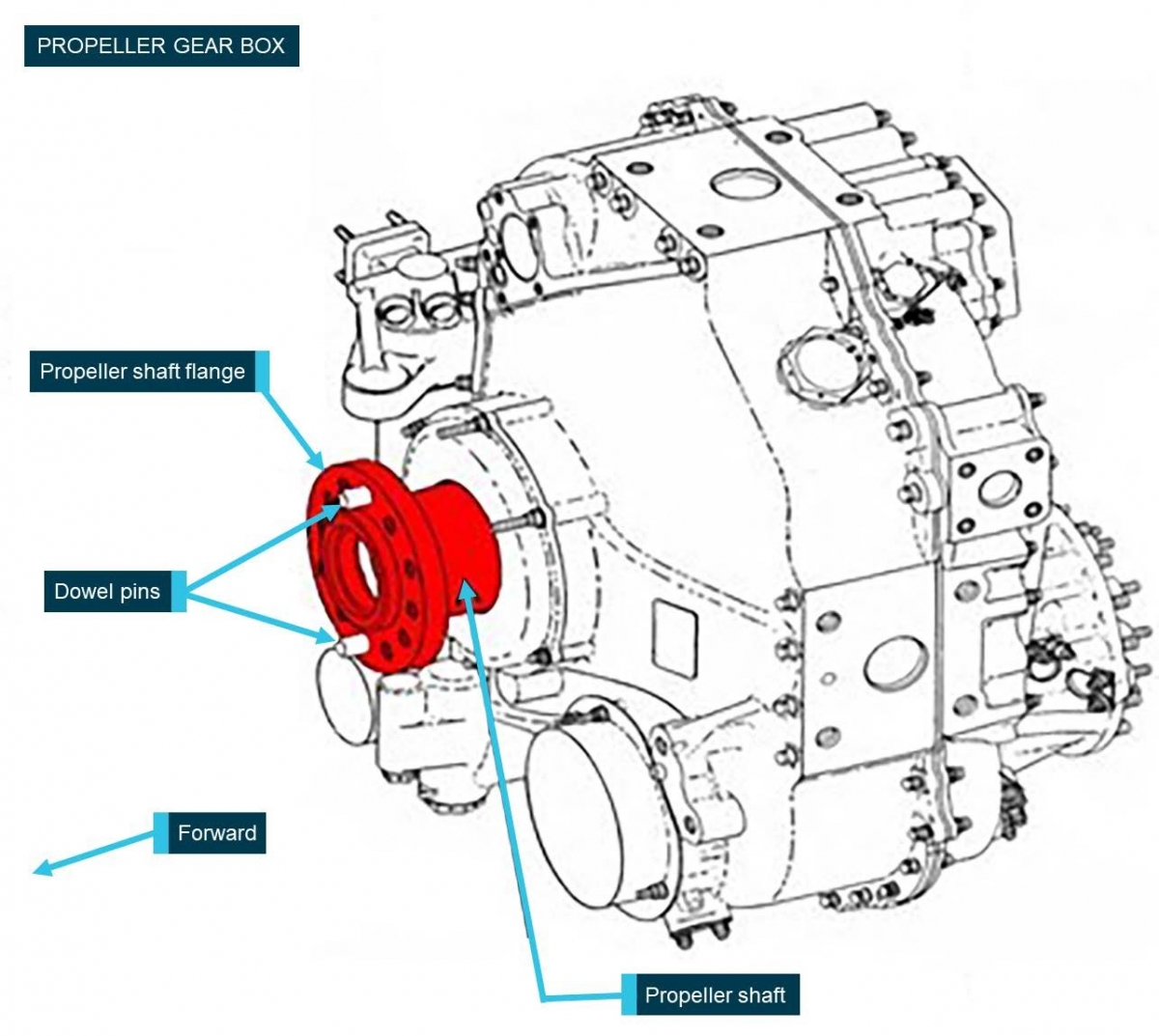 The PGB with the recovered section of the propeller shaft in coloured red. [Reproduced from the Official Report]

The propeller shaft flange was found to show extensive corrosion and fretting on its propeller side (forward) surface and a crack originating from one of the dowel hole surfaces had progressed through the flange thickness to its aft side and transitioned to the shaft at an angle which suggested that torsional loading had occurred. The shaft fracture had exposed evidence which was “typical of fatigue (cyclic) cracking”.

The forward (propeller) and aft (gearbox) side of the propeller shaft flange. [Reproduced from the Official Report]

Further detailed examination including cutting a cross section through the shaft was unable to establish a definitive cause of crack initiation, although “corrosion within the dowel pin hole” was believed to have been a strong contributor.

Analysis by engine manufacturer General Electric concluded that the initiation of fatigue cracking in the flange may have been due to a combination of factors including:

The PGB shaft was subject to on-condition rather than life-limited maintenance requirements and although a similar failure in 1991 had prompted a one-off ultrasonic inspection requirement to that end, there was no ongoing requirement for operators to routinely inspect dowel pin bores or check for cracking in their vicinity when the flange was exposed. It was considered that the consequence of this was that “any cracking or corrosion within the dowel pin hole may go undetected during routine maintenance”. The visual inspection carried out during the propeller change prior to installation of the PGB on the current aircraft had not identified any abnormalities. However, the Investigation found that there were “a number of deficiencies” in the worksheet used to describe this inspection task which meant that “engineers may not have been given the best opportunity to detect a growing crack in the PGB shaft flange area”.

Two Contributory Factors to the investigated event were identified as follows:

An additional Safety Factor was also identified as:

Safety Action taken whilst the Investigation was under way included but was not limited to the following:

The Final Report was issued on 10 October 2018. No Safety Recommendations were issued.