On 15 October 2011, a Loganair Saab 340 in uncontrolled airspace and inbound and level at 2000 feet QNH on a procedural non precision approach in day IMC to runway 18 at Stornoway received a TCAS RA ‘DESCEND’ when a second Loganair Saab 340 outbound on the same procedure descended prematurely to the same altitude contrary to ATC clearance. The subsequent investigation concluded that the failure of the controller to re-iterate the requirement to remain at 3000 feet outbound until advised had contributed the crew error. Minimum separation after the TCAS RA was less than 0.1nm horizontally when 500 feet vertically.

On 15 October 2011 a Saab 340 being operated by Loganair on a scheduled cargo flight from Aberdeen to Stornoway was inbound on a procedural non precision approach to runway 18 in day Instrument Meteorological Conditions (IMC) and level at 2000 feet Altimeter Pressure Settings when it received a TCAS RA ‘DESCEND’ against opposite direction traffic level at the same altitude and responded accordingly. The other aircraft was also being operated by Loganair on a scheduled passenger flight from Inverness to Stornoway and was outbound on the same procedural non precision approach. The inbound aircraft flew a go around following the avoidance manoeuvre and the second aircraft completed the procedure and landed.

An Investigation was carried out by the UK Airprox Board. It was noted that the incident had occurred in uncontrolled airspace and with only procedural ATS available and with APP and TWR duties being performed by one controller and an assistant.

It was noted that the procedure being flown by both aircraft (see the diagram below reproduced from the official report) was the Runway 18 LOC/DME/NDB(L) procedure involving a DME at the threshold.

The TCAS RA DESCEND received by the first aircraft was reported to have been to do so at a minimum of 2000fpm. The second aircraft reported subsequently that it had received a preventive RA ‘DO NOT DESCEND’ in response to its RA, the first aircraft had descended on the procedure FAT from 2000 feet QNH to 1400 feet before receiving a TCAS ‘Clear of Conflict’ and beginning a climb into a missed approach. It was confirmed that neither aircraft had visually sighted the other during their proximity but that the second aircraft was aware of its No 2 position for approach.

Whilst this requirement did not appear to have been formally promulgated to pilots, it was considered by some Board Members that the commander of the second aircraft, who was familiar with the aerodrome and aware throughout of the aircraft ahead, “should have known about the…requirement to maintain 3000 feet QNH outbound until the aircraft ahead had landed.” It was also noted that the First Officer of the second aircraft did not appear to have questioned the descent commenced overhead after reporting outbound.

The unit MATS Part 2 was also found to state that: 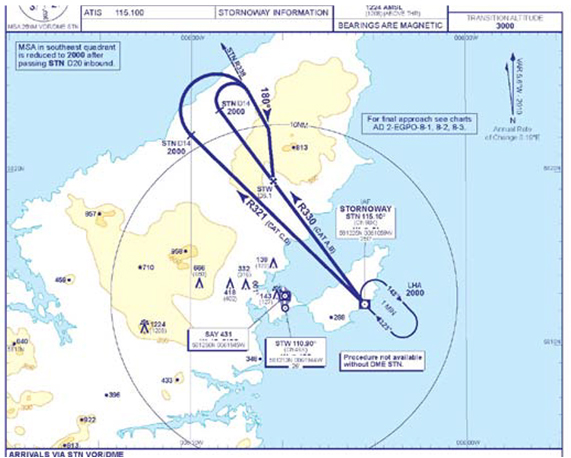 The Investigation was advised by the controller involved, who had been validated to work at Stornoway a little over three months earlier, that only one of the three OJTIs who had supervised him prior to validation “had practiced the repetition of (3000 feet QNH outbound) level instructions and the other two had not”. He stated that such repetition “was not normal at the unit and was perceived as increasing RTF traffic”.

It was concluded that the Cause of the event had been that:

The ICAO AIRPROX Risk Category (the actual risk after any avoiding action) was assessed as ‘C’.

The Final Report of the Investigation was published on 28 June 2012. No Safety Recommendations were made.