On 29 October 2014, a Shorts SD 3-60 ceased its climb out soon after take-off and was subsequently found to have descended into the sea at increasing speed with the impact destroying the aircraft. The Investigation found that the aircraft had been airworthy prior to the crash and, noting a dark night departure and a significant authority gradient on the fight deck, concluded that the pilot flying had probably experienced a somatogravic illusion as the aircraft accelerated during flap retraction and made a required left turn. The extent of any intervention by the other pilot could not be determined.

On 29 October 2014, contact was lost with a Shorts SD 3-60 (N380MQ) being operated by SkyWay Enterprises from a base in Puerto Rico under contract to FedEx Corporation and on a scheduled cargo flight from Sint Maarten to San Juan Puerto Rico as SKZ7101 soon after take-off into night VMC and its wreckage was subsequently located on the sea bed less than a mile from the departure runway. The two pilots, the only occupants, were both killed.

An Investigation was carried out by the Sint Maarten Civil Aviation Authority in accordance with ICAO Annex 13 principles. Flight recorders were not installed nor required on this cargo configured aircraft. It was found that neither CVR nor a FDR had been installed in the aircraft, both having been removed during conversion of the aircraft to cargo-only operations in 2000 on acquisition from American Eagle Airlines. It was noted that this action was in accordance with the applicable FAA requirements. Data contained on a hand-held GPS which was recovered from the submerged wreckage were successfully downloaded by the NTSB and in combination with limited radar data, were enough to determine the approximate flight path during and after take-off. It was noted without further comment that "the operating company chose not to participate in the Investigation".

It was found that the 49 year old-Captain had been employed by the Operator for "about four months" prior to the crash after a previous employer where he had worked as a SD3-60 First Officer had ceased operations and had been checked out as a SD3-60 Captain soon afterwards. Available records indicated that he had accumulated a total of 5,318 total flying hours which included 362 hours on type in command. The 26 year-old First Officer had been employed by the Operator for just over a year and had accumulated 1,040 total flying hours which included the 510 hours on type gained since joining the Operator. It was found that the two pilots had been on the same duty on both of the previous two days as on the day of the accident - a morning flight from San Juan to Sint Maarten and an evening flight back to San Juan.

It was established that having been cleared to take off from runway 28 and instructed to initially turn onto and maintain heading 230°, the aircraft was observed to make a normal take-off and begin climbing. However, as it passed overhead the end of the 2,300 metre-long runway, it continued climbing out over the sea in dark night conditions. About a minute after becoming airborne in what was reported as intermittent heavy rain, ATC observed the aircraft begin to descend both visually and on radar and a radio call to the aircraft was not returned. The lowest reported cloud base at the time was 1,300 feet with scattered TCU "in all quadrants" and visibility was 4,000 metres. The Investigation noted that "take-offs from runway 28 present no visual landmass past the immediate shore line" which occurs soon after the end of the runway.

Data downloaded from the NVM of a subsequently-recovered hand-held GPS device indicated that once beyond the departure runway threshold, the aircraft had reached a maximum recorded GPS altitude of 433 feet whilst making a groundspeed of 119 knots. Two further GPS data points over the sea showed the aircraft losing altitude whilst airspeed increased. The annotated track superimposed on a Google Earth-based background is shown below. The first aircraft debris was located just under three hours later. 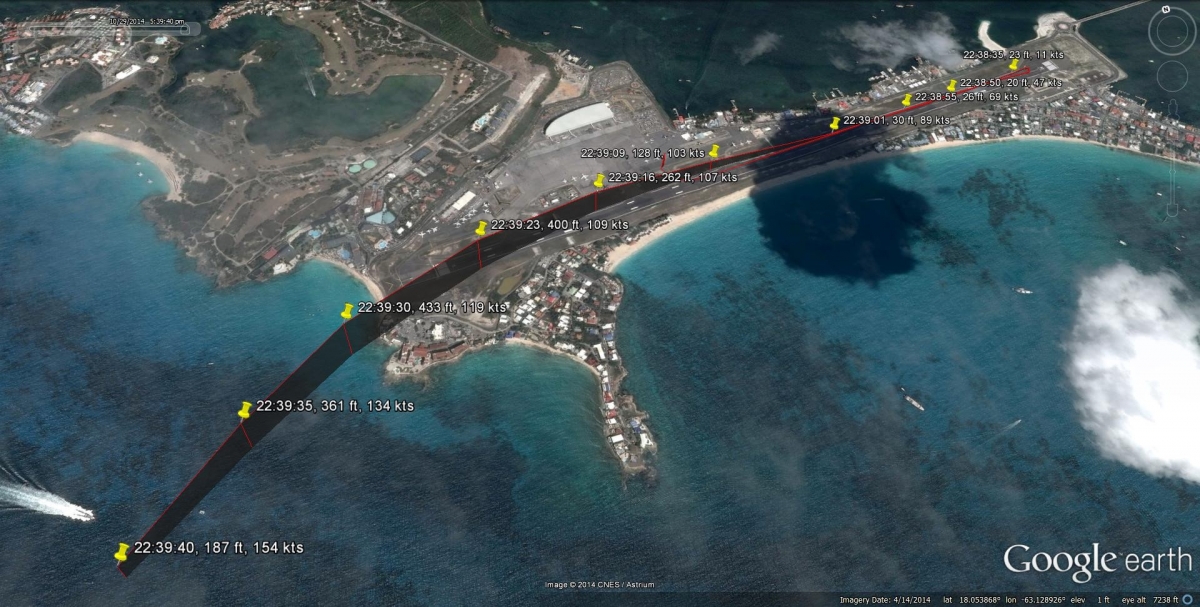 The flight path derived from the recorded data recovered from a hand-held GPS device. [Reproduced from the Official Report]

A detailed investigation of the recovered wreckage and available data found that "there was no evidence of any aircraft related defect or malfunction that could have contributed to the accident". It was also noted from the certified load and trim sheet for the accident flight that the actual take-off weight had been just under 80% of the MTOW and that the Centre of Gravity had been near too the mid-point of the allowable range.

It was found that the use of a hand held GPS by the Operator's pilots was routine and this had been facilitated by FAA-approved Operator action to install a GPS antenna and cabling to the instrument panel nine years earlier. However, it was noted that the FAA Principal Operations Inspector (POI) responsible for SkyWest for the three years leading up to the accident had told the Investigation that "he was not aware of GPS use in the cockpit".

The Investigation noted that the prevailing easterly winds at Sint Maarten overwhelmingly (for over 90% of opening hours) favour departures from runway 10 which is also the only permitted instrument landing runway and that "night departures from runway 10 overfly an illuminated area during initial climb out". Unusually, the surface wind on the night of the accident meant that with gusts up to 20 knots from directions between 220° and 270° being reported, a departure in the 28 direction was appropriate. It was considered that the "take-off direction on runway 28 toward the open sea was relatively unfamiliar to the both the PF and the PM" and noted that such "a lack of visual references after passing over a shoreline at night is described by many pilots as a black hole effect".

It was considered that the flight deck authority gradient was "notable and may have affected crew performance". However, in the absence of CVR data, there was "no evidence upon which to make a determination on the Captain’s attitude toward teamwork or the possible inadequate assertiveness of the First Officer in the performance of pilot not flying/pilot monitoring duties". The Investigation attempted to identify distractions that could have led to the accident. It was considered that the flap retraction which was likely to have occurred at about 400 feet agl would have produced longitudinal acceleration which would have been accompanied by an apparent pitch up sensation to which the magnitude of susceptibility to misperception "varies between persons and circumstances" and may reasonably have been heightened by the complete lack of external visual cues whilst still clear of cloud. The start of a left bank to take up the required departure heading when combined with potential effect of flap retraction was considered to have been "sufficient to be misinterpreted as a sensation of pitch up leading to a somatogravic illusion" which it was concluded could explain "the PF’s unintended mishandling of the flight controls and a desire to pitch down while initiating a left turn (which) quickly led to an extreme unusual attitude and the subsequent crash".

Although pilot training records provided by the Operator indicated that the CRM training required had been provided, the "specific content of this training program was not disclosed by the operator nor was oversight of the actual training provided by the FAA POI". The Investigation found "a strong indication that the eight required elements of an effective CRM program were not presented in sufficient detail to be effective" and noted that whilst "much is unknown in this accident scenario because conventional on-board recording devices were not available", it was the case that "early recognition of divergence from the intended flight path (situational awareness) is a necessary component of the CRM concept".

The Investigation considered the evidence that might have indicated whether the SkyWay Enterprises' (SWE) senior management were as concerned about operational safety as they claimed at interview. The findings were formally summarised as follows:

"Investigation revealed that an atmosphere to maintain the status quo prevailed within the Company. Management did not provide any method to communicate safety issues with the employees through internal company media (email or bulletin) or to maintain a voluntary safety reporting system. Following conversion of the SD3-60 fleet to cargo only, management removed the safety equipment mandatory for passenger carrying from the aircraft. The list included TCAS, GPWS, a radar altimeter, an attitude gyro, and the autopilot, along with removal of the FDR and CVR. This action provided considerable weight savings and eliminated continuing maintenance expenses on the units. However, the equipment removals are examples of the negative attitude toward safety and consideration of pilot workload exhibited by company management. Removal of the autopilot increased the exposure to crew fatigue and possible errors in a high air traffic environment. With the removal of the FDR, a flight data monitoring program is not possible. Removal of TCAS equipment increased the exposure of the travelling public and flight crews to the risk of an in-flight collision between a passenger carrying aircraft and an SWE operated cargo flight. Also:

It was noted that the Operator's business model of "minimum compliance with regulations and resistance to change" and the "geographical and cultural factors of its international operations […] were allowing the formation of attitudes in pilots and maintenance personnel that are less than proactive toward safety initiatives" and that "training of the next generation of young pilots and maintenance engineers is seriously challenged in this environment (which) can be a breeding ground for the learning of bad habits" in FAA Part 135 operations - which are not required to adopt the SMS approach advocated by ICAO that at the time of the Investigation, the FAA only required from Part 121 carriers.

It was considered that evidence gathered during the Investigation did not indicate that FAA oversight of the operation had led to a meaningful understanding of operational risk in the SWE Puerto-Rican based operation. It was recognised that achieving meaningful FAA oversight of Part 135 operations presented a major challenge because the FAA priority is "passenger carrying operators or those identified as high risk" and noted that in the case of SWE, the responsible Flight Standards District Office (FSDO) at Orlando "did not consider SWE to be a high risk carrier prior to the accident". It was considered that "in the near future, FAA oversight will need to adopt more than the current self-described 'snapshot in time' form of compliance oversight". Rather, the Administration will "need to adopt a uniform, balanced approach that combines inspections for regulatory compliance along with audits of safety management practices that identify how operators manage their risks".

The formally-documented statement of Cause was as follows:

"The PF experienced a loss of control while initiating a turn to the required departure heading after take-off. Flap retraction and its associated acceleration combined to set in motion a somatogravic illusion for the PF. The PF’s reaction to pitch down while initiating a turn led to an extreme unusual attitude and the subsequent crash. (The extent of) PM awareness of the imminent loss of control and any (subsequent) attempt to intervene could not be determined. Crew Resource Management (CRM) performance was insufficient to avoid the crash."

A Contributory Factor was also identified as:

The Final Report of the Investigation was released on 23 September 2016.