On 2 December 2013, an SA227 Freighter crew lost control of their aircraft after commencing descent from an 11,000 feet cruise in night VMC and it was destroyed by terrain impact which followed structural break-up at about 1,500 feet agl. The Investigation concluded that the break-up had followed an aggressive elevator input in a late attempt to recover from an earlier loss of control which the evidence suggested had been the consequence of unintended crew actions rather than mechanical anomalies. A number of previous SA227 loss of control events were identified, some of which had potentially similar features.

On 2 December 2013, a Fairchild SA227-AC Freighter (N831BC) being operated by IBC Airways on a non-scheduled cargo flight from Santo Domingo, Dominican Republic to San Juan Puerto Rico under call sign 'Chasqui 405' in night VMC lost contact with ATC and the aircraft was subsequently seen by witnesses descending towards terrain impact, which did follow and kill both pilots.

An Investigation was carried out by the NTSB. The accident aircraft was operating under an FAA Part 135 AOC and configured for freight operations and it was not equipped with an FDR or a CVR, nor was it required to be, although it had previously been fitted with a CVR when configured for passenger operations.

It was established that the aircraft had been on an out and back trip from San Juan to Santo Domingo with round trip fuel on board. It had been "moderately loaded" for the return flight which would have taken less than an hour to complete in good weather conditions. The flight had been uneventful and in the cruise at 11,000 feet until San Juan Combined en route Approach Control (CERAP) had cleared the aircraft to descend, initially to 7,000 feet. Thirteen minutes later after checking in with the next CERAP sector, the crew advised that they were leaving 11,000 feet and were re-cleared to 7,000 feet. The read back of this instruction was the last transmission received from the aircraft. Soon afterwards, ATC advised the aircraft to descend to 3,000 feet and expect an ILS approach at San Juan. Radar contact was lost four minutes later. A witness on the ground who was subsequently interviewed stated that having heard engine noise, he had looked outside and "seen the aircraft with the right wing down, turning in a spiral form" and had also noticed a red light "spinning". After that, he had heard an "impact noise" and, 5 seconds later, "another solid impact noise".

The radar trace of the aircraft showing the latter part of the cruise and the subsequent descent is shown in the first of the two illustrations below with the second showing the flight path derived from the final few returns. 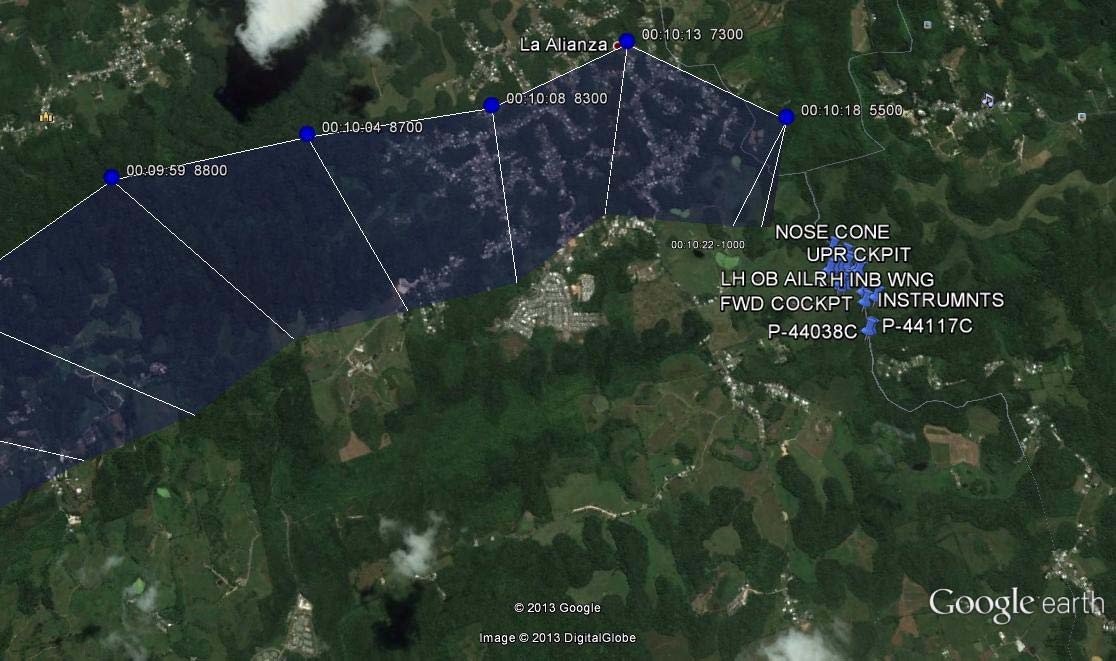 The flight path of the aircraft derived from secondary radar returns. [Reproduced from the Investigation Docket] 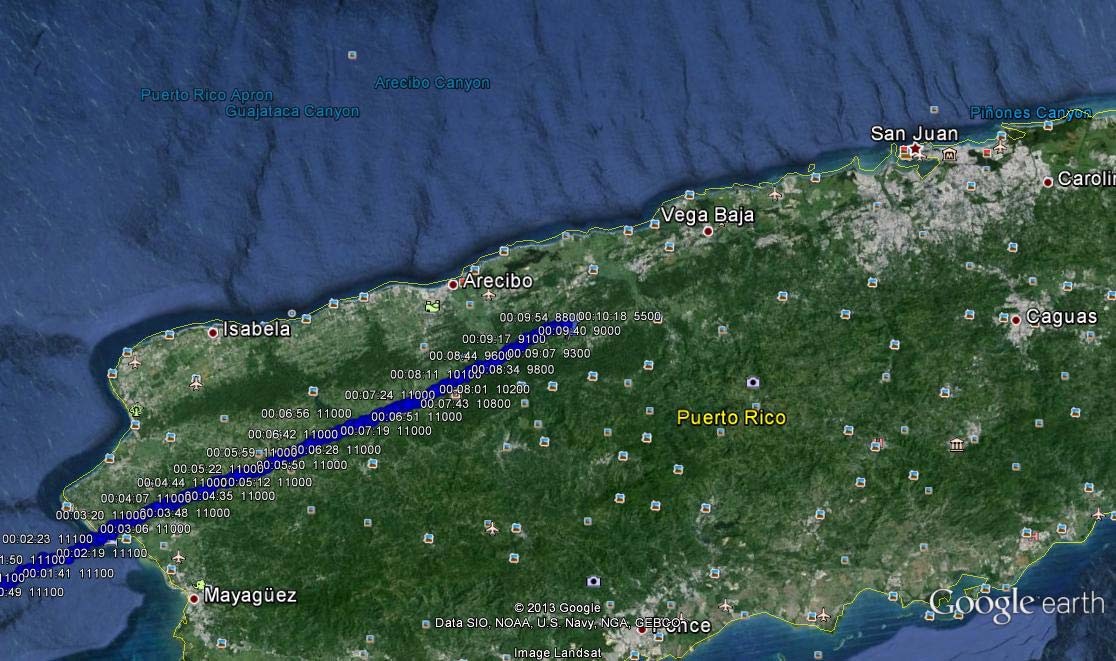 The flight path derived from the final secondary radar returns. [Reproduced from the Investigation Docket]

The wreckage was found scattered over a large area approximately 580 metres long and up to 180 metres wide oriented south. The wreckage field was at an elevation ranging from 575 feet to 675 feet. There was no obvious impact crater and the remains of the aircraft were scattered throughout the wreckage field. Examination of the wreckage found no evidence of any in-flight fire or explosion and both wings were found to contain residual fuel, although the quantities of this could not be determined.

Recorded secondary radar data showed that having begun the descent from 11,000 feet, the aircraft had descended on track to 8,300 feet over the next 3 minutes but the radar track then indicated "a 20-degree turn to the left" and a descent to 7,300 feet in the next 5 seconds - a rate of descent estimated at about 12,000 fpm. The radar track then indicated an approximately 45-degree turn to the right and a further 1,800 feet of descent in the next 5 seconds - a rate of descent of over 21,000 fpm. There were no further verifiable radar altitude returns. Groundspeed deduced from radar had been fairly constant at around 260 knots until the descent had begun after which it increased to between 280 knots and 290 knots in the minute prior to the beginning of the rapid descent.

With no evidence found that there had been any in-flight mechanical failures which might have resulted in a loss of control, all the available evidence pointed to an initial loss of control resulting from pilot action which may have led to a spiral dive followed by a subsequent in-flight breakup of the aircraft as the result of an attempted pilot recovery involving a sharp pull-up at high speed. It was impossible to be sure which pilot was at the controls when either of these had occurred. It was noted that the aircraft was not equipped with either an AP or a yaw damper.

The considerable history of similar events involving this aircraft type was examined to see if similarities existed. In one case, the pilots of an AP-equipped SA 227 had intentionally induced an excessive slide slip as a means to balance fuel between the wing tanks and when the AP tripped out, and an uncontrolled roll resulted. However, "in the current investigation, the fuel cross feed valve was found in the closed position, indicating that a fuel imbalance was likely not a concern of the flight crew". In at least two other previous events, including a fatal 2005 accident in New Zealand, unequal fuel loads had developed with the AP engaged and with no corrective action taken, the AP eventually reached its cut out threshold and this precipitated a sudden roll. Whilst the aircraft in the case under investigation here did not have an AP, previous occurrences were found to indicate that any "sudden yawing or rolling motion, regardless of the source, could result in a roll, nose tuck, and loss of control". Such rolls "may have been recoverable, and in one documented case, a pilot was able to recover" but only after a height loss of almost 11,000 feet.

During the accident flight, it was considered likely that "during the descent, the flight crew did regain control […] to the extent that the flight control surfaces were effective [but] with darkness and the rapid descent at a relatively low altitude, one or both crew members likely pulled hard on the yoke to arrest the downward trajectory, and, in doing so, placed the wings broadside against the force of the relative wind, which resulted in both wings failing upward". There was evidence that as this happened, both propellers had "simultaneously chopped through the fuselage" to the rear of the flight deck. At the same time, "the horizontal stabilizers were also positioned broadside against the relative wind and they also failed upward". It was also found that at some point in the upset sequence, the pilots had lowered the landing gear which may have been in an attempt to slow or regain control of the aircraft.

The Investigation determined that the Probable Cause of the accident was "the flight crew's excessive elevator input during a rapid descent under night lighting conditions, which resulted in the overstress and breakup of the airplane".

A Contributory Factor to the accident was determined as "an initial loss of airplane control for reasons that could not be determined because post accident examination revealed no mechanical anomalies that would have precluded normal operation".

The Final Report was adopted by the NTSB on 25 July 2016 and subsequently published. No Safety Recommendations were made.