On 22 December 2012, the crew of a Swearingen SA227 attempting a landing, following an unstabilised non-precision approach at Sanikiluaq at night with questionable alternate availability in marginal weather conditions, ignored GPWS PULL UP Warnings, then failed in their attempt to transition into a low go around and the aircraft crashed into terrain beyond the runway. One occupant – an unrestrained infant – was killed and the aircraft was destroyed. The Investigation faulted crew performance, the operator and the regulator and reiterated that lap-held infants were vulnerable in crash impacts.

On 22 December 2012, a Swearingen SA227-AC Metro lll (C-GFWX) being operated by Perimeter Aviation on a passenger charter flight from Winnipeg to Sanikiluaq as PAG993 crashed into terrain during an attempted late go-around in night VMC following an unstabilised tailwind non-precision approach. One of the nine occupants, an unsecured infant, was killed, one passenger and both pilots were seriously injured and the remaining five passengers sustained minor injuries. The aircraft was destroyed but there was no fire. 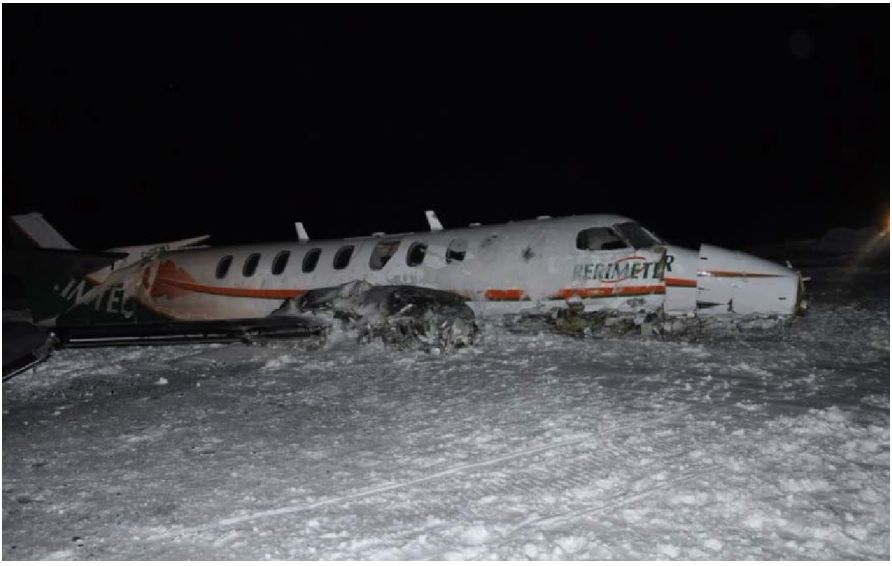 An Investigation was carried out by the Canadian TSB. The 2 hour CVR was recovered but the aircraft was not fitted with a FDR nor was it required to be. Both the installed GPS and the GPWS provided useful data.

It was noted that the Captain had 2330 hours experience on type out of 5700 hours total flying experience and had originally joined the Operator as a First Officer in 2006, being promoted to Captain the following year. Soon after this, he had left to work for a series of other operators of heavier aircraft but had been re-employed by Perimeter as a Captain two months prior to the accident after being laid off from a previous job. Since returning, he had been to Sanikiluaq twice, once during the day and once at night, both in VMC. The First Officer had been employed by the Operator as a ramp worker whilst completing his multi-engine and instrument ratings before commencing work as a pilot on type in July 2011. It was the first time the two pilots had flown together. Both pilots reported having felt rested prior to their duty which was rostered as a return flight that would have taken them up to the maximum allowable crew duty time.

It was found that the accident flight was being operated in place of a scheduled flight which would normally have been flown the previous day by Keewatin Air, a "sister company" to Perimeter Aviation, but had been cancelled due to adverse weather at Sanikiluaq. It was noted that Perimeter did not operate scheduled flights to Sanikiluaq and also that the crew had been unable to obtain copies of AIP Charts required for their trip whilst at their fight planning office and were told to collect these at Keewatin Air prior to departure. They subsequently forgot to do this before getting airborne and rather than turn back to get them, had obtained information over the radio en route - although this had not included the direction for the procedure turn required for the only available instrument approach at Sanikiluaq - to runway 27 - nor the MDA (620 feet QNH) for the circling approach to Runway 09 which forecast conditions had indicated may be required.

The crew pre-flight inspection of the assigned aircraft disclosed a faulty door warning indication and the necessary rectification accounted for most of the eventual 4 hour delay to the departure of the flight. The CVR recording showed that the Captain had "felt frustrated as a result of the pre-flight preparation issues" and that this had continued "during the non-emergency, non-stressful, 2-hour period" prior to descent. The cabin load consisted of freight in the rear half and passengers in the front half with the recorded weight being just a few kg below the permitted 7257kg maximum take-off weight. However, an additional 90 kg of fuel had also been loaded, which, it was calculated, would at normal consumption rates have allowed for an additional 20 minutes of flight beyond the 5 hours available using the declared fuel load.

The First Officer was designated as PF and a cruise level of FL230 was eventually reached to avoid some light turbulence. Shortly before starting descent on what was expected to be a flight of about 3 hours, a weather check of destination and nominated alternate (Kuujjuarapik - 90 nm from destination) disclosed that conditions at the latter were worse than forecasted. Weather for La Grande Rivière, some 260 nm south southeast of the destination, was therefore also obtained but it was then found that there was insufficient fuel to reach it. Although the conditions at Kuujjuarapik meant that a diversion there might not be practical, it was assessed that "there was sufficient fuel on board to conduct several approaches at destination before needing to consider diverting" and the flight was continued, with the Captain taking over as PF because of a Company Requirement that landings on gravel runways such as that at Sanikiluaq must only be made by Captains.

The wind velocity at destination as the flight approached was given as 040º/15-20 knots. The published MSA was 1600feet QNH and sufficient reference for a straight-in approach to runway 09 was not available (see the diagram below which shows with numbered annotations the ground track for the remainder of the flight included as [n]). The aircraft continued towards the NDB [1] and then completed a procedure turn [2] (to the south rather than to the north as promulgated but terrain-safe due to it being flown at MSA) onto the NDB final approach to runway 27 [3] which had a touchdown zone elevation of 110 feet. GPS was used to determine distance from the NDB. There were no approach lights but runway identification lights - unidirectional flashing strobe lights - were installed and working.

As the approach continued, "visual contact with the runway environment was made approximately 0.6 nm from the threshold of Runway 27" when just above the procedure MDA of 560 feet QNH. A left-hand circling for Runway 09 was then initiated [4] and the aircraft descended to an indicated altitude of approximately 500 feet - below the published minimum circling altitude of 620 feet QNH which had not been obtained - and 30 seconds later, "visual contact with the ground was lost and the circling manoeuvre was continued in Instrument Meteorological Conditions (IMC)". A go-around was not called and the published missed approach procedure (turn right 10º and climb to 1600 feet QNH before turning right to return to the NDB) was not flown. 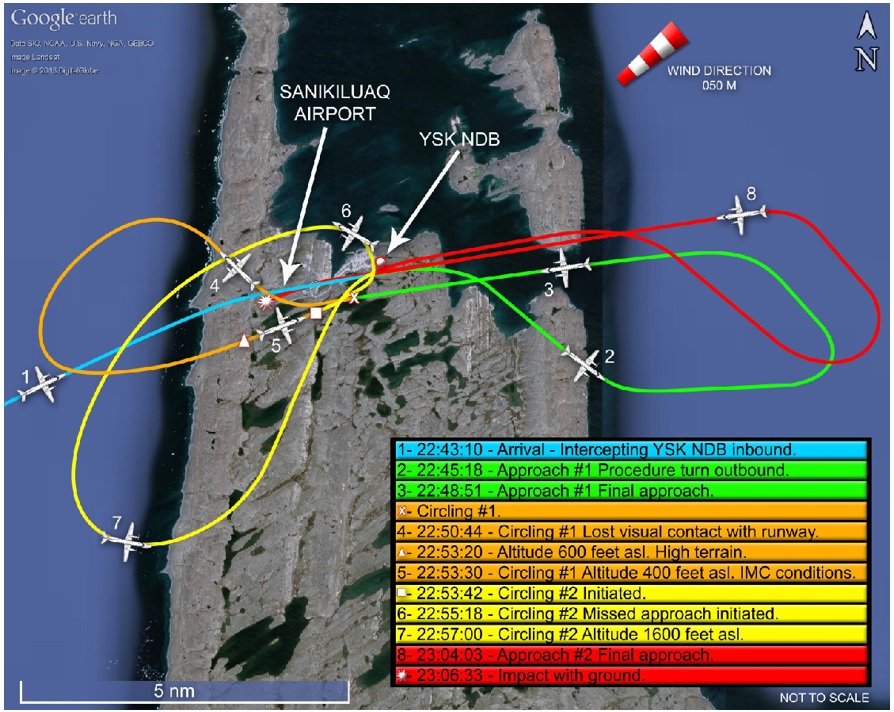 Whilst continuing to circle IMC, "the aircraft descended to an indicated altitude of 400 feet, at a speed of 140 knots" [5] with the north east wind "pushing the aircraft south of the Runway 09 centreline" into an area with terrain up to 223 feet - which was noted as equating to a height of 155 feet agl with cold temperature correction applied. Runway 09 was eventually sighted but it was not possible to land and a second ad hoc "circling manoeuvre" for Runway 09 was commenced [6] with visual contact with the runway soon lost again and the aircraft was turned to the north and then climbed to around MSA in a continuing left turn so that a return to the NDB was made from the south. The Captain stated that a further approach to runway 27 would be the last attempt to land at Sanikiluaq and that if it was unsuccessful, they would proceed to Kuujjuarapik, which was about 30 minutes away and for which there would be sufficient fuel. The latest wind velocity was obtained - little changed at 050° 15-20 knots - but still equivalent to a 14 knot tailwind component against the maximum permitted 10 knots.

The approach made use of the GPS to carry out the NDB RWY 27 (GNSS) overlay approach in order to benefit from distance to go and more precise tracking. Visibility was advised as 1½ sm (2400 metres) as "the aircraft was established at an indicated altitude of 400 feet, 3 nm from the airport, 197 feet below the published MDA, without having established the required visual references". Visual contact with the runway was subsequently acquired just beyond the MAP at approximately 0.7 nm from the runway threshold and "the decision to land was made". Full flap was selected, power was set to idle and descent at an excessive 140 knots (Vref + 30) was commenced. As the rate of descent exceeded 1500 fpm, a GPWS ‘SINK RATE' Alert occurred, followed immediately by the first of a series of 'PULL UP' Warnings as the rate of descent exceeded 1800 fpm – which both pilots subsequently stated that they had "not heard". The runway threshold was crossed at approximately 180 feet agl and the PULL UP Warnings continued until the aircraft was approximately 60 feet agl and approximately 900 feet past the threshold. The runway mid-point was passed still airborne and two seconds later, the Captain called a go-around. Ten seconds later, "the aircraft collided with terrain beyond the departure end of Runway 27 and south of the runway centreline". It then continued to slide and rotate right before coming to rest on an easterly heading.

An evacuation was initiated by the First Officer using the forward right overwing emergency exit whilst the Captain made a MAYDAY call on the airport radio frequency. A rapid response "reduced the exposure of passengers and crew to the elements". The one fatality was an infant restrained only in the parent's arms which failed to hold the infant secure during the impact.

An annotated reconstruction of the vertical profile during this final approach is shown below. 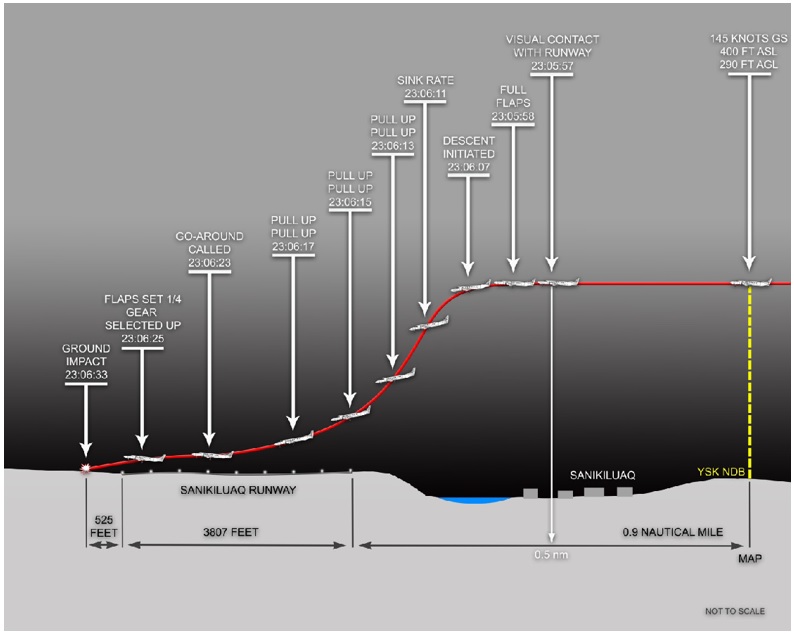 A comparison of the approach as actually flown by descent from the MDA at the MAP (the NDB) with a 3º [Continuous Descent Final Approach|CDFA]] (referred to by the Investigation as a Stabilised Constant Descent Approach - SCDA) is shown on the diagram below.

Having established the facts, the Investigation then focused on some specific aspects including but not limited to:

The formally documented Findings of the Investigation were as follows:

Safety Action taken by Perimeter Aviation as a consequence of the accident included the following:

The Final Report of the Investigation was authorised for release on 10 June 2015 and released on 29 June 2015.