On 14 July 2019, after control of a DJI-Inspire 2 UA was lost, it descended into people on the ground under power causing multiple minor injuries. The Investigation found that “professional drone pilots” were operating the UA in gross breach of the approval obtained, had deleted all recorded controller evidence of the accident flight and that their account of the loss of control was not compatible with the evidence recovered from the UA. It also noted that the risk of injury to third parties was increased by the absence of protection around the propellers which was not a regulatory requirement.

Aircraft type not (yet) assigned a designator

On 14 July 2019, control of a DJI-Inspire 2 unmanned aircraft (UA) being operated for aerial photography purposes by a drone video production company - Flt Art Prod - at night at a music festival near Perpignan was lost after which it collided with an obstruction before descending still under power into the audience and causing panic as it struck several people causing minor personal injuries as a result. The UA sustained substantial damage.

After being notified of the event several days after it had happened, the French Civil Aviation Accident Investigation Agency (BEA) opened an Investigation. It was discovered at an early stage that all relevant flight data had been deleted from both the UA itself and from the control and monitoring equipment used by the pilot to fly it. However, the video camera memory was recovered from the UA and it was possible to access the recorded video for almost a minute prior to the accident.

Once at the festival, it was decided to carry out the flight under investigation from an undeclared site. The pilot stated that the batteries had been used during one of the three previous flights and had then been fully recharged. He stated that he had been flying the drone back and forth between the left side of the stage and the stage Itself with the drone climbing on the outbound leg without ever exceeding 30 metres agl before descending on the return leg. He stated that after three or four flight minutes, the cameraman told him that the charge of one of the batteries was dropping and he decided to bring the UA back to land but on the return leg, it began “an uncontrolled descent towards a 15 metre-high vertical structure on the left side of the stage”. He added that his battery power readings showed one “in the red with a charge of 10% to 12% and the other in the green with a charge of 40%". The descent resulted in the UA colliding with the structure “at three-quarters of its height" and that when the cameraman instructed him to shut down the motors he did so “by pushing the two joysticks of his remote controller together”. The Investigation subsequently determined that this was not the correct action (see later) and so the out of control and now-damaged UA continued to be powered and descended out of their sight.

The UA video camera was accessed to confirm the stated flight trajectory immediately prior to the loss of control and it was found that when the drone had flown over around one third of the stage, it had begun a 180° turn without changing height but on completion of the turn it began descending quickly and about 12 seconds later had struck the top of a vertical structure on the left side of the stage and then “practically hovering” there for 4 seconds before “swerving to the middle of the stage and the public” after which the video ends. 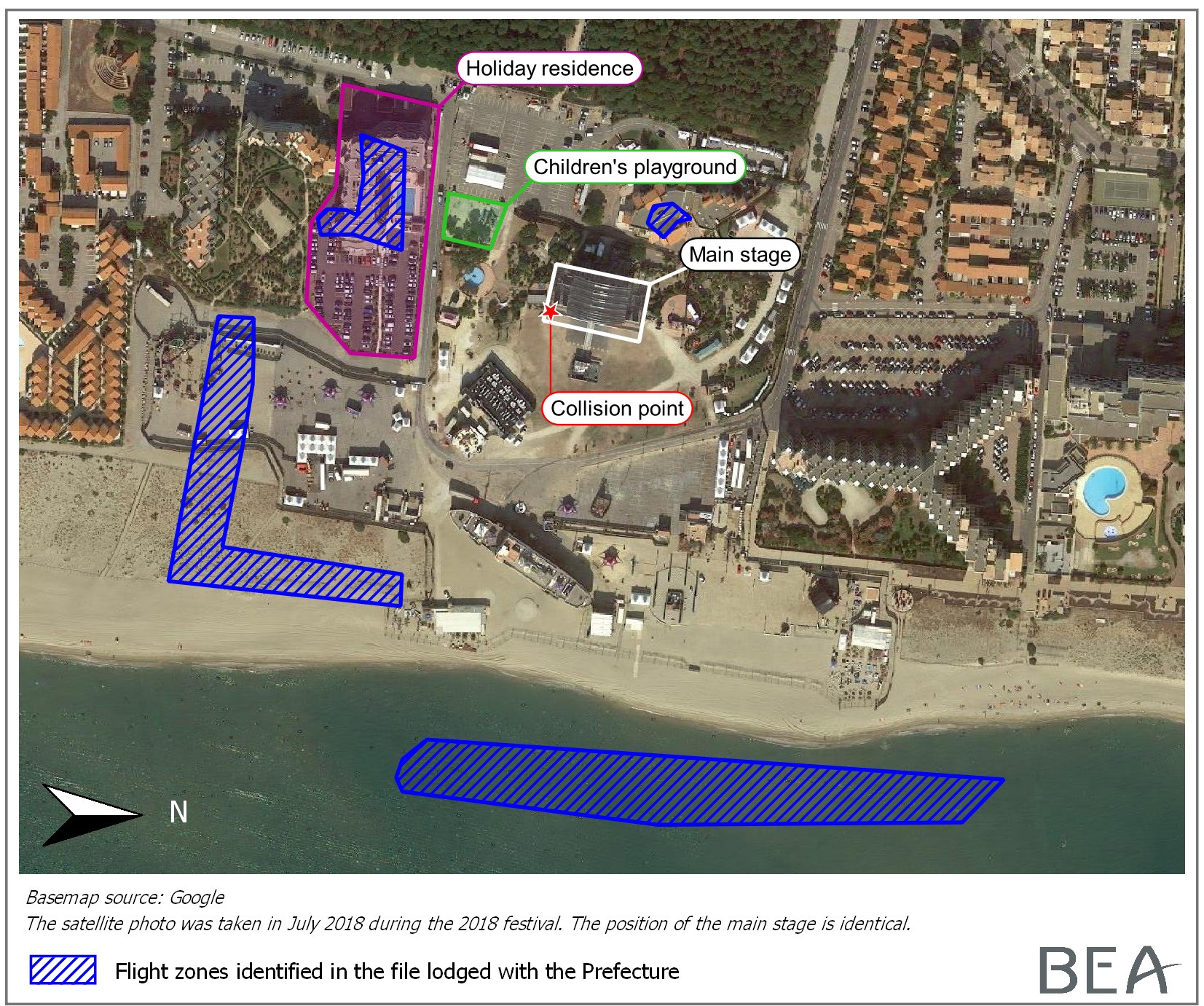 The approved flight zones, the festival stage and the location of the collision. [Reproduced from the Official Report]

The UA was being operated by a drone video production company at a music festival near Perpignan under an approval which had been granted under the applicable French national regulations by the provincial government on the basis of a statement of intent. This sought permission for an unlimited number of flights and was accompanied by a map which showed the four “flight zones” shown on the illustration above but on an out of date aerial photograph which did not show recently constructed buildings, the location of the festival stage or the areas where the audience of several thousand people would be.

Because part of the operation was to take place at night, the approval included a derogation to permit this issued by the regional office of the State Civil Aviation Safety Directorate (DSAC) which added a requirement for third party exclusion zone such that the minimum horizontal distance between the aircraft and persons not linked to its operation would be 30 metres.

The regulations themselves required that an approved operation of this type must:

The UA involved was a DJI Inspire 2 quadcopter equipped with a Zenmuse X5S gimbal camera (see the illustration below) which resulted in a total weight 4.3 kg. It was powered by two batteries which the User Manual stated would result, with the camera installed, in a maximum flight endurance of “around 25 minutes”. This Manual did not give any indication as to whether both batteries needed to be serviceable to continue flight but when contacted, the manufacturer confirmed that the two-battery system is provided for redundancy purposes and that it is possible to continue a flight with a single battery with battery power remaining being the sum of that in both batteries even if the charge of one is zero.

It was noted that there had been previous problems with the reliability of the batteries used in the DJI Inspire 2 and one incident in the UK in 2018 which was comprehensively investigated by the manufacturer was found to have been caused by faulty batteries which sent an incorrect battery charge level to the UA control computers. A check of the firmware installed in the UA involved in the event under investigation found that it was fitted with the modified version of the firmware which eliminates this signalling fault but it was not possible to determine when this had been installed. 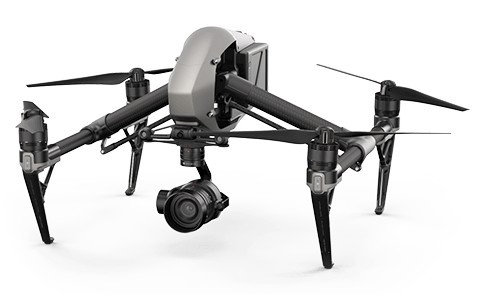 It was found by reference the User Manual that in the event of a ‘Critical Low Battery Warning’, the threshold for this being user-specified and claimed to have been 10% in this instance, an automatic emergency landing is initiated. The Company Manager read the battery charge values just after the crash as 40% and 60% which was confirmed by police officers who attended the site and activation of an automatic emergency landing was discounted.

The Investigation found that the action reported to have been taken to shut off power to the UAV had actually been that required to start the motors, which would explain why it had been possible for them to continue running as the UAV descended into the audience. It was noted that there had been two ways to shut down the motors in flight and deploy the twin parachute, both of which were relatively complex. It was also noted that once such action has been taken, the system linking the power cut-off and twin parachute, which was “quite expensive in comparison with the cost of the drone” must be replaced.

It was noted that had the recorded data for the flight not been deleted, it would normally have been recoverable from the DJI GO 4 APP installed on both the pilot’s tablet and the cameraman’s mobile phone as well as from the internal memory of the UA. Subsequent test flights were made using the batteries used during the flight under investigation - installed first in an identical UA with the participation of DJI and then reinstalled in the same loss-of-control UA. Both test flights were completed without any anomaly being observed with the landings carried out when both battery power indications were 0% on APP with no battery failure alert annunciated. Both flight logs were correctly created and successfully accessed.

The Conclusion of the Investigation was formally recorded as follows:

The Company had received the required authorisation to film a music festival gathering of several thousand people at night with a drone. This authorisation was accompanied by a requirement to comply with a third-party exclusion zone of a radius of 30 metres. Once at the festival, the drone pilot and the cameraman decided to carry out the occurrence flight from an undeclared site. The drone had flown back and forward between the take-off site and overhead the stage. On the video taken by the drone’s gimbal camera, third parties can be seen at a horizontal distance of less than 10 metres from the aircraft manoeuvring zone.

The drone pilot and the cameraman stated that a problem with one of the two batteries had resulted in a loss of control just before the collision with a vertical structure on the stage but none of the examinations carried out on the drone and its batteries were able to reproduce the failure described. The battery charge values read after the flight were not compatible with the activation logic of an automatic emergency landing.

As the flight logs were no longer present on the drone, on the drone pilot’s tablet or on the cameraman’s telephone, the Investigation was unable to obtain additional information about a possible battery failure. After the drone had struck the vertical structure, the drone pilot stated that he had tried to shut down the motors in flight. However, he did not use the correct procedure on his remote controller to achieve this and the motors were not stopped. Assuming that the drone was still controllable, this could explain the beginning of the drone’s path after its collision with the vertical structure.

Contributory Factors which may have been related to the event were identified as follows:

Safety Lessons arising from the event and its Investigation were identified as:

The Final Report was published in English translation on 21 April 2021 having been previously published in the definitive French version on 13 April 2021. No Safety Recommendations were made.