On 18 July 2013, an Airbus A319 level at 2000 feet QNH in Class G airspace and being radar vectored towards an ILS approach at Southend in day VMC had a sudden but brief base leg encounter with a paramotor which was not visible on radar and was seen too late for avoiding action to be practicable, before passing within an estimated 50 metres of the A319. The paramotor pilot could not subsequently be traced. The Investigation made a safety recommendation to the UK CAA to review the regulation and licensing of paramotor pilots.

On 18 July 2013, an Airbus A319 inbound to Southend and being radar vectored in uncontrolled airspace was involved in an AIRPROX in day VMC with a Paramotor which was unknown to ATC and subsequently could not be traced. The sighting occurred too late to allow avoiding action to be taken and the A319 pilot reported that the risk of collision had been "very high".

An Investigation was carried out by the UK ARPROX Board. Recorded radar data relevant to the Investigation was obtained and the reports of the Airbus pilot and the controller involved were obtained. The weather conditions prevailing at the site of the conflict were confirmed to have been Visual Meteorological Conditions (VMC) at the CAVOK level.

It was established that whilst his aircraft was being radar vectored for an ILS approach to runway 06 at Southend and was on base leg 7nm south south west of the airport, the A319 Pilot had seen a Paramotor with a red canopy in a 10 o' clock relative position "50 metres away". He reported that "due to the size and relative speeds of the two aircraft" no avoiding action had been possible. Despite attempts, the paramotor pilot could not be traced and did not make themselves known to the Investigation.

The Southend Radar controller confirmed that the A319 had been identified using Mode-S and his report that there had been no radar returns from unknown traffic in the vicinity of the A319 was confirmed by replay of the radar recording. It was noted that prior to the conflict, the crew of the A319 "had agreed a de-confliction service" with the controller and that this service is based on surveillance-based traffic information which seeks to achieve separation from unknown traffic of 3000 feet vertically or 5nm laterally. The radar installation was confirmed as "approved and compliant with regulatory requirements."

The Southend radar recording was analysed by the radar manufacturer who concluded that "the paramotor was probably detected for a short period of time at the raw-radar plot data level, but that it was probably too small to be detected consistently by the radar". They noted that "in order to reduce false radar returns produced by clutter, the equipment has a tracker filter, which removes raw-radar plots having a speed of less than 40knots" and it was therefore likely that "the raw-radar plot data did not generate a track on the radar display due to the low detection rate cause by the paramotor’s very small radar cross-section and its low speed".

A separate analysis of ACC radar recordings held at London Control carried out by the CAA ATS Investigations Unit found that there was evidence of an intermittent contact near the A319 at the reported time for which a ground speed of 27 knots could be calculated. This contact appeared to have been within 185 metres of the A319 at the time the AIRPROX was reported, but it was noted that no bounds of possible error were associated with this estimate. 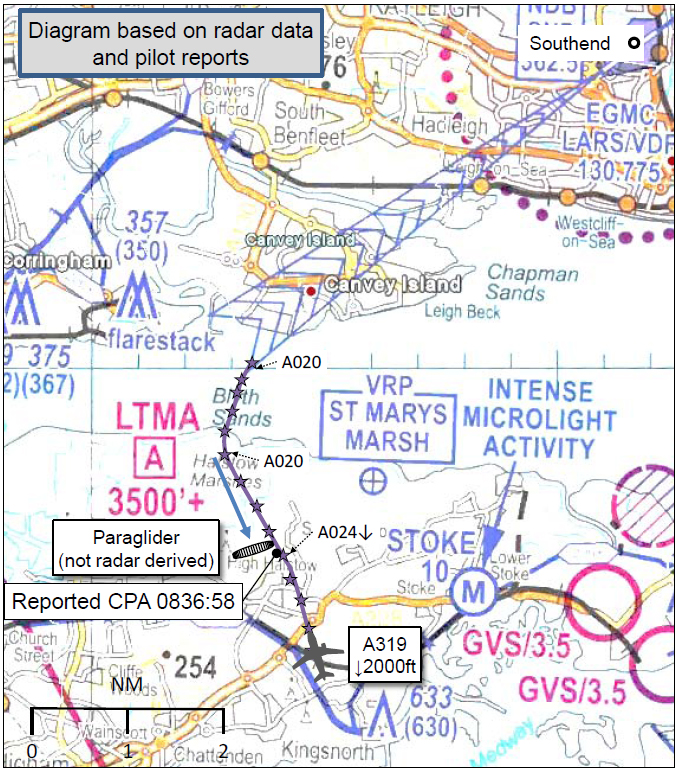 It was noted that in Class G airspace, the applicable UK Rules of the Air assigned equal responsibility for collision avoidance to both pilots and, given that a paramotor is classed as a glider in the UK Air Navigation Order, the A319 was required to give way. Because of this, the Board decided that the Cause of the AIRPROX was "an effective non sighting by the A319 pilot". It was unanimously agreed that the ICAO Risk Classification 'A' - that an aircraft proximity in which a serious risk of collision has existed - should be assigned.

It was also noted that in the UK, paramotor pilots were not required to obtain a licence to fly or mandated to undertake any training but were subject to the same provisions of Air Law as all pilots.

The Board was reminded that at the time of the incident, the Southend Airport Operator was already seeking the re-establishment of controlled airspace around the airport as a result of increased operations there since April 2012.

EDITOR'S NOTE Class 'D' Controlled airspace has since been established around Southend Airport.

The Final Report of the Investigation and review was prepared and subsequently published following the Board meeting on 11 December 2013.