Whilst a light aircraft was lined up for departure, a vehicle made an incorrect assumption about the nature of an ambiguously-phrased ATC TWR instruction and proceeded to enter the same runway. There was no actual risk of conflict since, although LVP were still in force after earlier fog, the TWR controller was able to see the vehicle incursion and therefore withhold the imminent take off clearance. The subsequent Investigation noted that it was imperative that clearance read backs about which there is doubt are not made speculatively in the expectation that they will elicit confirmation or correction.

Whilst a departing Piper PA-42 light aircraft was lined up but not cleared for take off on runway 21 at Perth in normal day visibility, an airport authority ground vehicle operating airside to check RVR failed to comply with an ATC TWR instruction and entered the same runway. There was no actual risk of conflict since, although LVP were still in force after earlier fog, the visibility had substantially improved such that the TWR controller had been able to see the vehicle incursion and therefore withhold the imminent take off clearance.

An Investigation was carried put by the Australian Transport Safety Bureau (ATSB). It was noted that at Perth, the standard method of determining RVR for LVP purposes was for a vehicle driven by an Airport Operations Officer (AOO) to drive along the active runway from the threshold to a designated intermediate observation point (marked ‘4’ on the diagram below) and report the number of runway edge lights visible. When standing by for this duty, the AOO was required to park their vehicle a specified location (marked ‘9’ on the diagram below). 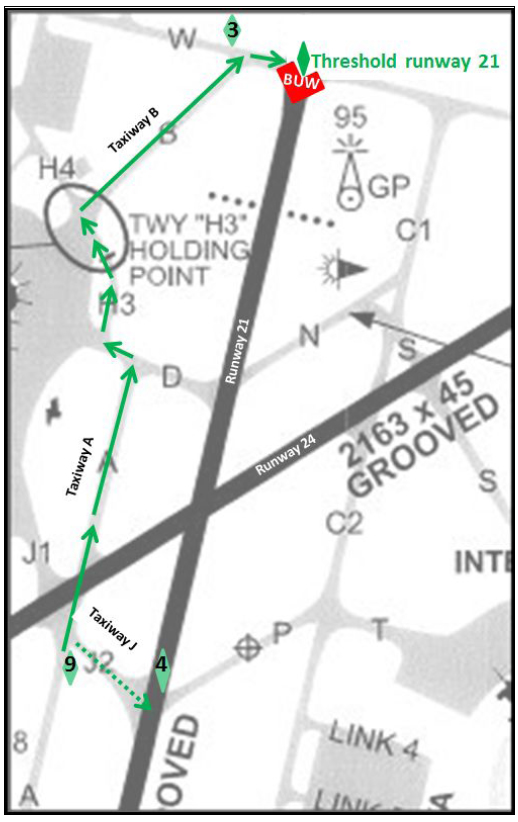 Unknown to the TWR, a handover between the AOO who had just completed an RVR run from the 21 threshold to position 4 was found to have occurred shortly before the TWR controller requested a further RVR check. This was necessary in order to validate the suspension of LVP given that the full runway length was now visible but ambiguous phraseology was used to communicate the required route to the runway 21 threshold. The read back to this instruction consisted of what the driver thought was meant, which was an entirely different route to the 21 threshold than the one intended by TWR, with the expectation that his understanding would be either confirmed or corrected. However, TWR had difficulty receiving that transmission and the remainder of the exchange did not result in TWR awareness of the incorrect read back.

The diagram below shows as a solid green line the route TWR intended should be taken from the parking position (9) and the dotted green line shows the route actually taken by the vehicle as a result of the misunderstanding. Once the TWR controller realised by direct observation from the VCR that an incursion of the active runway was about to occur, it was noted that his initial transmission intended to advise the vehicle of his surprise at the route taken was prefaced with the call sign of the PA-42 before being repeated correctly.

It was noted that as the vehicle involved was on the TWR frequency rather than the GND one, there would have been no driver awareness of aircraft or vehicle movements on taxiways.

The Conclusion of the Investigation was that “the use of non-standard phraseology by the Tower controller resulted in (the airside vehicle involved) misunderstanding an instruction and entering the active runway”. The existing AIPs guidance in this respect which emphasised that reducing the time needed for radio communications should be achieved by the use of standard phraseology so as to avoid misunderstanding the intent of messages was noted.

The wider ‘Safety Messages’ of the event were considered to be that:

The Final Report of the Investigation AO-2012-086 was released on 27 November 2012. No Safety Recommendations were made.