On 19 March 2013 a Boeing 727 freighter was cleared to take off on a runway occupied by two snow clearance vehicles. The subsequent cancellation of the take off clearance was not received but a successful high speed rejected take off was accomplished on sight of the vehicles before their position was reached. The Investigation attributed the occurrence to the controller's failure to 'notice' the runway blocked indicator on his display and to his non-standard use of R/T communications. The late sighting of the vehicles by the aircraft crew was due to the elevated runway mid section.

On 19 March 2013, a Boeing 727-200 Freighter (C-GKFJ) being operated by Kelowna Flightcraft Air Charter on a scheduled domestic cargo flight (273) from Hamilton ON to Winnipeg MA began take off on runway 30 at Hamilton in normal night visibility until two opposite direction snow clearing vehicles were observed on the runway ahead at which point a high speed rejected take off was accomplished with the aircraft coming to a stop clear of the position of the vehicles.

An Investigation was carried out by the Canadian TSB. Recorded data relevant to the Investigation was recovered from the aircraft Flight Data Recorder (FDR) but data on the Cockpit Voice Recorder (CVR) had been overwritten when the CB was not tripped and the aircraft departed on the intended flight shortly after the rejected take off. The R/T and ATC ground telephone recordings were also available.

It was found that at the time of the occurrence, runway 30 was being reported as having a cleared for width of 55 metres of which 80% was "bare and wet", 10% "wet snow trace" and 10% "ice" with "turning bays and runway intersections…described as slippery". It was established that the TWR/GND Controller, working alone whilst the other controller on duty was taking a break with all transmissions on GND and TWR frequencies audible on both frequencies had, despite the annunciation on his strip display that the runway was occupied (see the illustration below), issued a take off clearance to the B727 whilst it was backtracking runway 30. However, immediately after doing so, he had realised his error and, after a short pause without releasing his PTT switch, had followed this pause with "actually standby ah". The B727 First Officer acting as PM had begun to acknowledge the clearance as soon as the controller had finished giving it and as a result, only the very end of the readback - the aircraft callsign - was heard by the controller who assumed that the intended "cancellation" of the take of clearance had been understood. He issued an instruction for the snow clearance vehicles to clear the runway and then looked away from it (see diagram showing the aerodrome layout and TWR VCR position below) whilst giving taxi instructions to another departing B727 still on the ramp and, by the time he returned his attention to the runway, was surprised to see the first B727 on the take off roll. This take off roll "went unnoticed (by the controller) for 22 seconds". 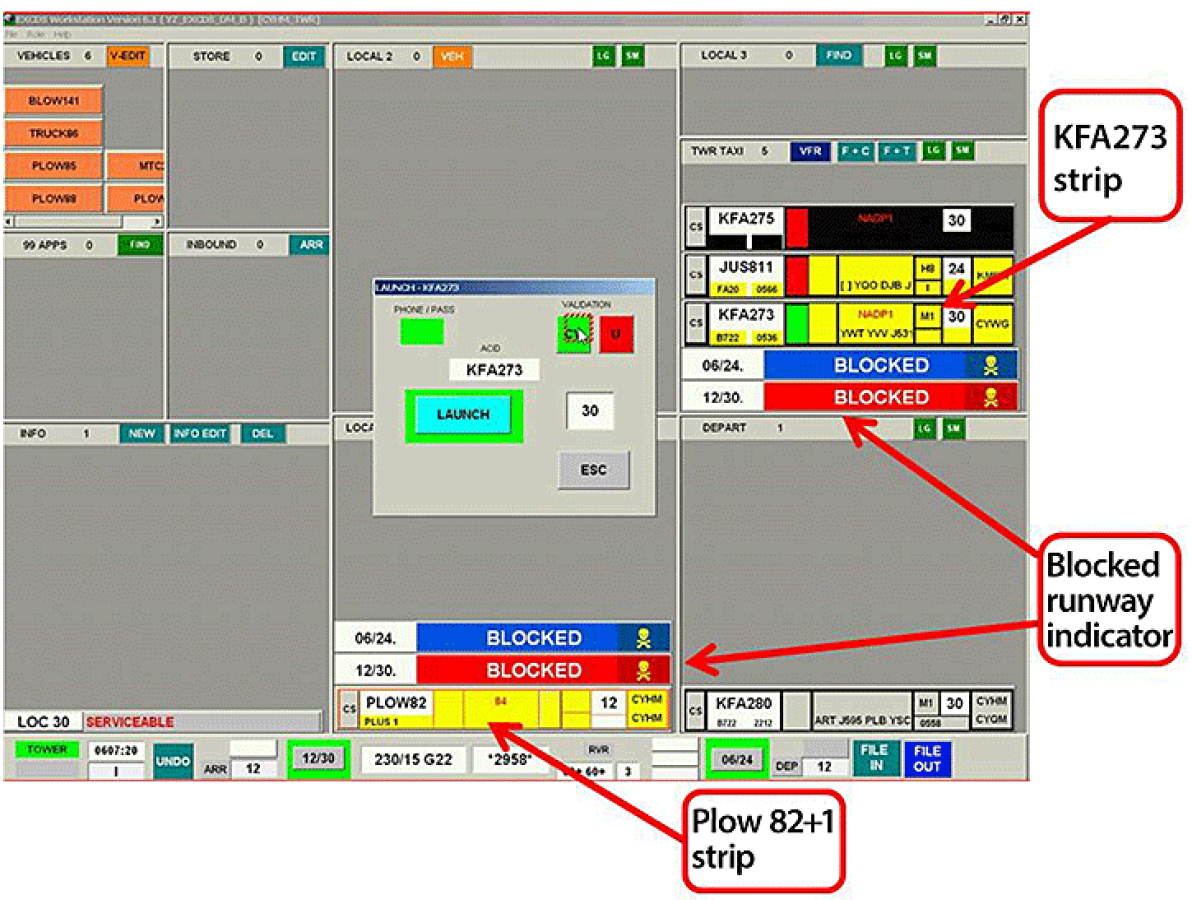 Upon seeing the aircraft approximately 350 metres down the runway and accelerating, he transmitted "Flightcraft 273 abort take off". The aircraft was just passing 80 knots and the required check was being called and acknowledged. There was no immediate response or acknowledgement from the crew, who at that time were unable to see any obstruction ahead due to still being on an upslope towards the centre section of the runway, However, shortly afterwards, as the aircraft approached the higher mid-section of the runway at 122 KCAS, they saw the lights of the snow clearance vehicles ahead and immediately initiated a rejected take off with the aircraft reaching a maximum recorded speed of 130 KCAS - the applicable V1 for the take off - before being brought to a stop at approximately the halfway point of 3230 metre-long runway, separated from the snow sweepers by approximately 365 metres. By this time, the vehicles had moved to the side of the runway in case the aircraft was unable to stop in time. Maximum braking of the aircraft was used initially, but brake pressure was reduced once it became clear that the aircraft would stop before reaching the vehicles. 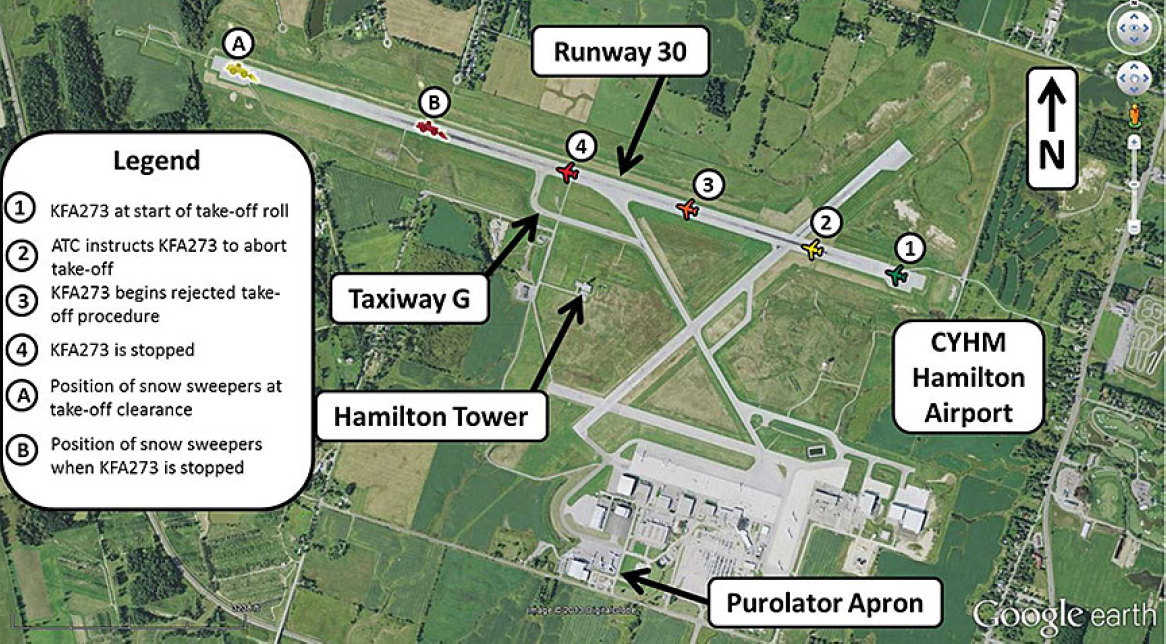 visual depiction of the event (reproduced from the Official Report)

The Investigation noted that recommended brake cooling times were ignored and the aircraft subsequently departed "less than 5 minutes after the RTO". It was also noted that the flight crew had, as usual given the absence of a more practical method on the aircraft type involved, been facilitating communication between each other, keeping one ear cup off the ear so that the ear closest to the other crew members was uncovered.

In respect of the overlooked 'Blocked Runway' annunciation on the controllers display, a review by the Investigation of 4 hours of recording around the time of the occurrence showed "that aircraft departed on runways that had a 'blocked runway' depiction at least three other times, although in all three cases, the runway was not in fact physically occupied". The potential for de-sensitisation of controllers to such an alert when routinely ignored was noted.

It was found that "on the controller's first scheduled day off….an unscheduled overtime shift" had arisen but when he had been called six hours before commencement and offered the shift, he had initially declined. Later "in response to a second phone call (and) once informed that no one else had volunteered", he had accepted. It was noted that "the controller reported feeling fatigued at the time of the occurrence" and had advised that he "occasionally had difficulty getting adequate sleep during this type of shift rotation". The Investigation made a detailed review of his work schedule and concluded that "a qualitative analysis of the pattern of work/rest during this period identified the same risk factors and likely impact on performance". However, it was concluded that on the evidence available "the existence of fatigue at the time of the occurrence could not be confirmed".

In respect of the flight crew's non response to the instruction to abort the take off when the aircraft was already at high speed, the Investigation noted "a similar occurrence, albeit under different circumstances" Vehicle / E190, Toronto Canada, 2013 which had occurred in 2013 when ATC at Toronto had issued an instruction to an aircraft on approach to go around when (similarly) there had been no apparent awareness of a reason to do so.

The Final Report was authorised for release on 5 November 2014 and officially released on 6 January 2015. No Safety Recommendations were made as a result of the Investigation.