On 29 July 2008, a Boeing 737-700 taking off from Toronto in accordance with its TWR clearance was about a third of the way down the runway when three vehicles, which had previously been cleared to enter the same runway by a GND controller were seen. The aircraft became airborne approximately 760 metres from the vehicles.

On 29 July 2008, as a Boeing 737-700 being operated by WestJet on a scheduled passenger flight from Toronto to Vancouver as WestJet 699 was taking off in normal ground visibility and daylight, three vehicles entered the far end of the runway driving in the opposite direction. ATC received an Incursion Alert and instructed the aircraft to reject the take off but this was ignored by the crew because the aircraft was near to rotation and it got airborne before reaching the vehicles.

An Investigation was carried out by the Canadian TSB. It was established that when the three vehicles, which were Rescue and Fire Fighting Services appliances en route to the fire training area, entered the upwind end of runway 33L on which the 737 was taking off, (see the diagram below), the aircraft was approximately one third of the way along the 9,088ft. (2,770m.) long runway. It was found that just over half a minute before the North TWR controller had cleared the 737 to take off on runway 33L, the GND north controller had, believing that runway 15R/33L was under his control, cleared the three emergency services vehicles to enter Runway 15R. 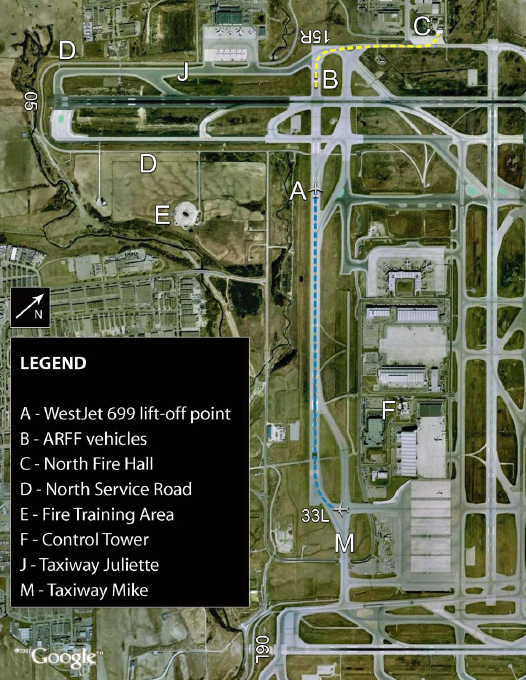 The 737 began its take off five seconds after clearance was given and the ASDE showed that it had reached a groundspeed of 59 knots when the three vehicles entered the runway. The conflict alert subsystem (RIMCASS) fitted to the ADSE generated a visual alert which almost immediately, triggered by the aircraft exceeding 60 knots ground speed with another target on the runway, changed to an aural and visual warning. This prompted the controller to instruct the 737 to reject its take off but as the aircraft was “at rotation speed” the crew continued the take off and the aircraft became airborne about 760 metres from the vehicles.

It was noted that at the time of the incident, runway 33L was being used for departures and runway 06L for arrivals and that “workload was neither heavy nor complex”.

At approximately 1030 local time, it was decided to switch from using runway 33L for departures and runway 06L for arrivals to using runways 05 and 06L for both departures and arrivals. As part of the preparations for the first arrival on runway 05, the North TWR North controller requested and was given control of runway 05 by the GND north controller by means of the usual verbal transfer. However, ownership and control of Runway 33L remained with the North TWR North controller.

It was found that “there are no visual indicators or other aide-memoires to show who owns or controls a particular runway at any given time”. It was also noted that vehicles on the airport manoeuvring area are usually controlled by a GND controller but that when it is “more convenient” to have vehicles using an active runway controlled by the appropriate TWR controller, this is permitted.

The Investigation concluded that the GND North controller had “expected” ownership and control of runway 33L to be relinquished to his position at the same time as ownership and control of runway 05 had been transferred to the North TWR controller. It was considered that their sighting of a vehicle on Runway 33L (access for which had been correctly authorised by the North TWR controller) “likely confirmed in (their) mind” that runway 33L was under the control of their position. It was also noted that due to the location of the GND north position in the control room, the GND north controller may well not have been able to see the 737 near the runway threshold.

It was also found that there was a route which the three fire vehicles could have taken to the fire training area which would have made use of a service road without the need for the vehicles to access any part of the manoeuvring area used by aircraft.

The Investigation concluded as follows in respect of Causes and Contributing Factors:

“Believing Runway 33L to be under the control of the north ground position, the north ground controller cleared the aircraft rescue and fire fighting (ARFF) vehicles onto that runway, leading to a conflict with the departing WestJet 699”

It was also found in respect of Risk that:

(1) The absence of an effective method for indicating runway ownership and control increases the likelihood of incursions.

(2) Where aircraft rescue and fire fighting (ARFF) vehicles do not need to use the runways, their unnecessary presence on a runway increases the risk of incursions, especially during a runway change.

As a result of the Investigation:

The Final Report was authorised for release on 15 May 2009. No Safety Recommendations were issued.