An air mass is a large body of air that has similar temperature and moisture properties throughout.

Air masses cover many hundreds or thousands of square miles and adopt the characteristics of the surface below them. Once an air mass moves away from its source region, underlying vegetation and water bodies can quickly modify its character.

Air masses are commonly described by a combination of these two factors, e.g. Maritime Polar (mP) to which a third letter may be added to indicate the stability of the air: 'k' to indicate that the air is colder than the surface over which it is passing, or 'w' when it is warmer than the underlying surface. An alternative system reverses the order of the first two factors, e.g. Polar Maritime (Pm).

As an example, the temperature and humidity characteristics of air masses encountered in the UK are illustrated in the diagram below. 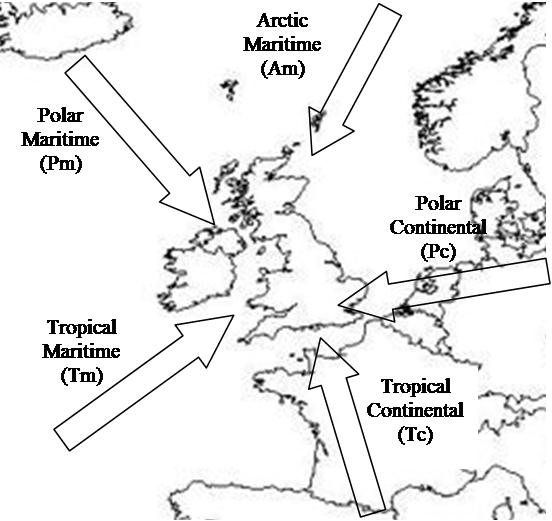 Temperature and humidity characteristics of air masses encountered in the UK

Once an air mass moves out of its source region, it may be modified as it encounters surface conditions different to those found in the source region. For example, as polar air moves southward, it encounters warmer land masses that heat it by the ground below. Polar and tropical air masses typically clash in the middle latitudes, producing some very changeable climates. The surface where the air masses meet is termed a 'front'. Cloud normally develops at a front frequently resulting in precipitation.