Airspeed is usually measured (and indicated) in knots (nautical miles per hour) although other units of measurement are sometimes encountered.

On older aircraft, airspeed is usually indicated to the pilot on a graduated scale over which a pointer moves (left hand picture below.

In modern aircraft, it is usually indicated on a speed tape which forms part of the Electronic Flight Instrument System display (left hand side of right-hand picture below).

In two pilot aircraft, each pilot has a similar ASI and each ASI is fed from an independent pitot-static system. Both can be fed from the same system in the event of failure of one system. Regardless of type of indication, commercial aircraft usually have an independent third ASI, which is usually of the pointer/scale type.

In a simple ASI, pitot pressure is fed into a barometic capsule which is located in a sealed container (usually the rear of the instrument) fed with static pressure. One end of the capsule is fixed; the other is connected to the instrument pointer by a suitable mechancial system. 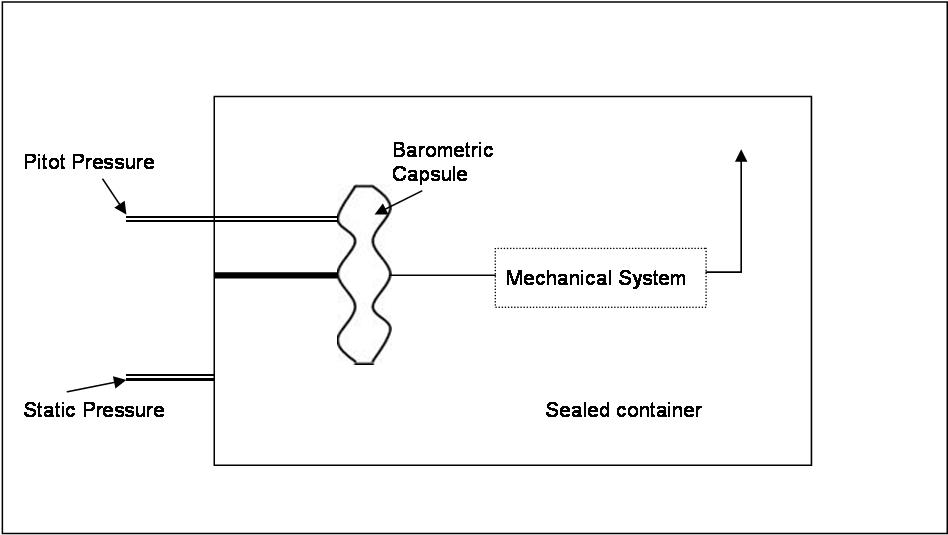 Schema of a simple ASI

ASIs may be fitted with movable "bugs" on which critical take-off and landing speeds can be set.

The speed indicated on an ASI is known as the Indicated Airspeed (IAS). It is the speed of the aircraft relative to the body of air through which it is flying.

IAS is the speed of greatest interest to the pilot from an aerodynamic point of view. Although True Airspeed (TAS) varies with altitude and temperature, IAS does not; thus critical speeds such as stalling speed and structural limit speeds are constant regardless of ambient conditions.

IAS depends on the density of the air, which varies with ambient temperature and pressure; thus, the IAS is only a measure of the speed over the ground in still air (zero wind) at sea level and in ISA conditions, i.e.:

In all other conditions the IAS will differ from TAS to a greater or lesser extent, for example, at 30,000 ft the TAS is more than 50% higher than the IAS. Therefore, a calculation must be made to convert IAS to TAS.

Instruments that record the TAS are also available, though uncommon in commercial aircraft.

If the TAS exceeds about 300 kts, another factor comes into play. The air entering the pitot head becomes compressed, causing the ASI to overread by an amount which depends on the IAS and ambient conditions. This "compressibility error" can be corrected for if desired.

Other errors in the system are reduced to an acceptable minimum by careful siting of the pitot tube and static vents, and by accurate calibration.