Rain-removal systems are designed to allow the pilot to have a clear view of the airport when taxiing and to allow them to see the approach and departure paths and runway environment when taking off and landing during rain. The systems are not commonly used during flight at altitude. There are several different ways to remove the rain from the windshields. Although many aircraft are not fitted with a rain removal system, those that are generally use one, or a combination, of the following systems:

Windshield wipers are the most common rain protection feature. Most of them use electrical motors but some aircraft may be equipped with hydraulic wiper motors. Usually the pilot’s and copilot’s windshield wipers are operated by separate systems to ensure that clear vision is maintained through one of the windows should one system fail. Each windshield wiper assembly consists of a wiper, wiper arm, and a wiper motor/converter. In many cases, windshield wiper systems will have limiting airspeed, above which they must not be operated. This limitation is due to the increased slipstream loading on, and the potential of damage to, the wiper assembly at higher speeds. 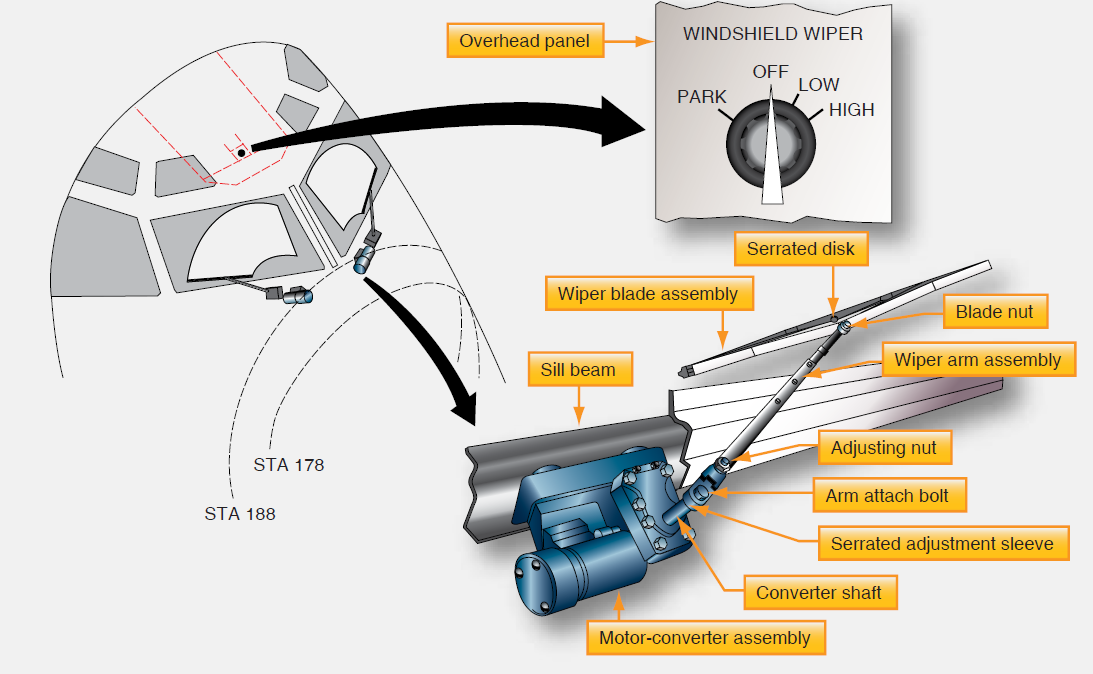 In general, the wipers are used during ground operations, for takeoff, during the final stages of the approach and for landing. In many aircraft designs, the geometry of the windshield limits the arc and sweep of the wiper blade resulting in only a relatively small segment of the windshield being cleared. The systems also can be quite noisy and some pilots find them distracting. For these reasons, many pilots will only use the wipers in conditions of heavy rain.

Water poured onto clean glass spreads out evenly. Even when the glass is held at a steep angle or subjected to air velocity, the glass remains wetted by a thin flm of water. However, when glass is treated with certain chemicals, a transparent flm is formed that causes the water to behave very much like mercury on glass. The water draws up into beads that cover only a portion of the glass and the area between beads is dry. The water is readily removed from the glass. This principle lends itself quite naturally to removing rain from aircraft windshields.

A rain repellant system permits application of the chemical repellant by a switch or push button in the cockpit. The proper amount of repellant is applied regardless of how long the switch is held.

This system should only be used in very wet conditions. If applied on dry windows, the undiluted repellant restricts window visibility. If the system is operated inadvertently, the windshield wipers should not be used as this tends to increase smearing. Any concentrated repellant or residue should be removed by a thorough fresh water rinse at the earliest opportunity.

After application, the repellant film slowly deteriorates when flying in rainy conditions. This makes periodic reapplication necessary. The period between applications depends upon rain intensity, the type of repellant used, and whether windshield wipers are used. It should be noted that some types of chemical rain repellents are considered toxic and others, if overused, can cause damage to painted surfaces. For these reasons, many operators have chosen to disable the rain repellant systems on the aircraft in their fleet. 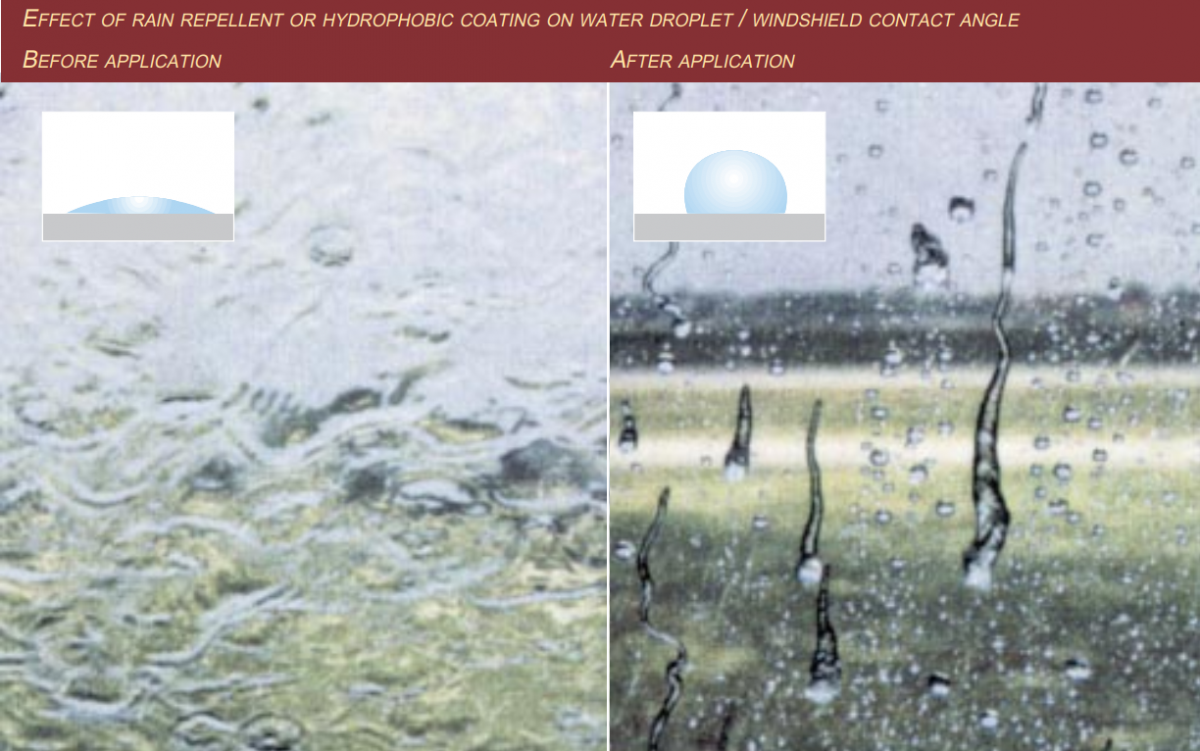 Most new aircraft windshields are treated with surface seal coating. The manufacturer’s coating process deeply penetrates the windshield surface providing hydrophobic action for a relative long period of time. When effectiveness declines, the coating must be reapplied.

The effect is similar to the chemical repellent, the differences being that hydrophobic coating last longer (while repellents usually need to be applied more than once during a flight) but coating restoration requires more effort (compared to refilling the repellent tanks).

Windshield wipers characteristically have two basic problem areas. One is the tendency of the slipstream aerodynamic forces to reduce the wiper blade loading pressure on the window, causing ineffective wiping or streaking.

The other is in achieving fast enough wiper oscillation to keep up with high rain impingement rates during heavy rain falls.

As a result, most aircraft wiper systems fail to provide satisfactory vision in heavy rain.

Pneumatic rain removal systems remove rain by directing a ﬂow of heated air over the windshield. This heated air serves two purposes. First, the air breaks the rain drops into small particles that are then blown away. Secondly, the air heats the windshield to prevent the moisture from freezing. The air can be supplied by an electric blower or by bleed air. 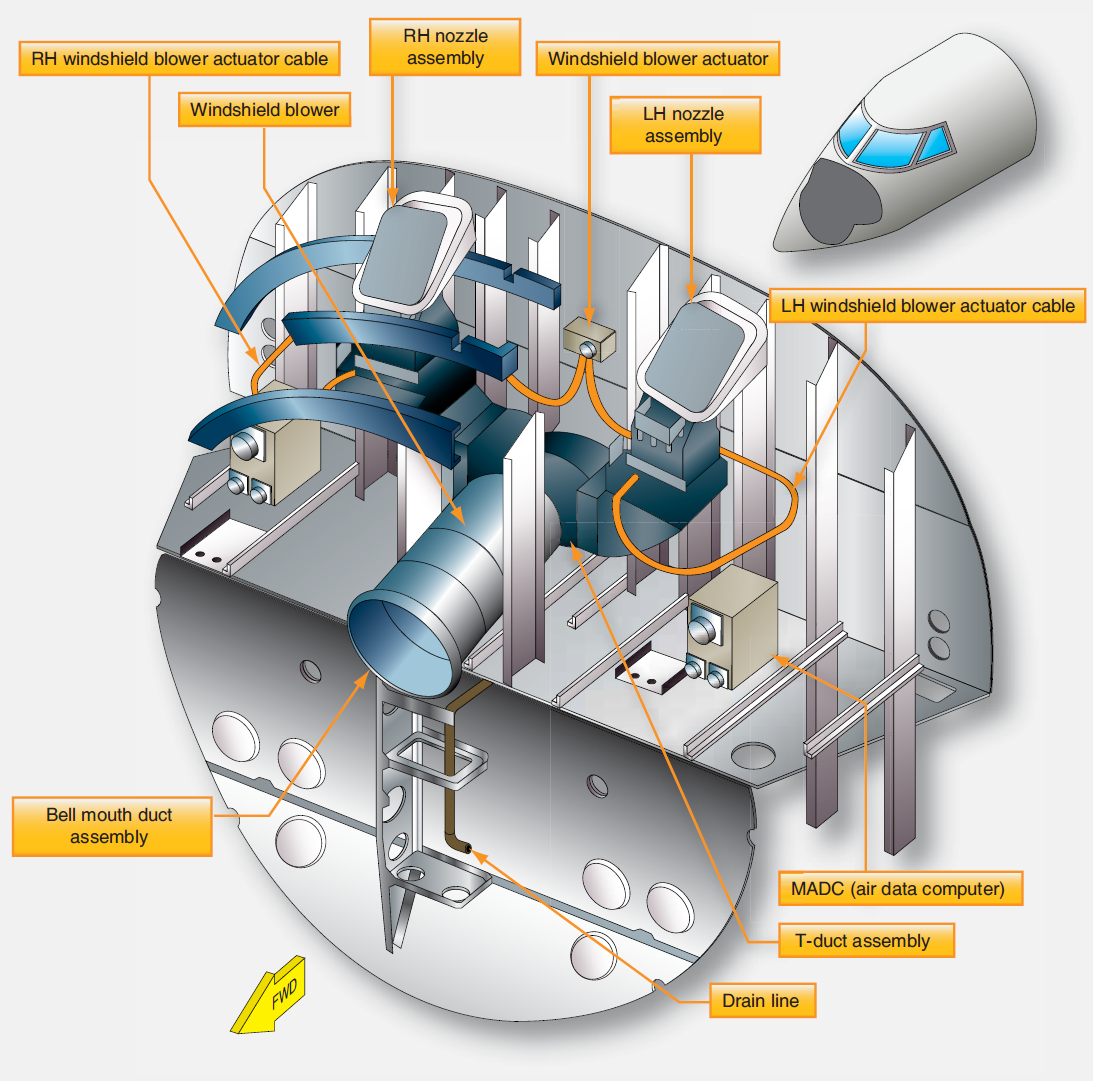 On 13 April 2013, a Lion Air Boeing 737-800 flew a day non precision approach to runway 09 at Bali (Denpasar) and continued when the required visual reference was lost below MDA. Despite continued absence of visual reference, the approach was continued until the EGPWS annunciation 'TWENTY', when the aircraft commander called a go around. Almost immediately, the aircraft hit the sea surface to the right of the undershoot area and broke up. All 108 occupants were rescued with only four sustaining serious injury. The Investigation attributed the accident entirely to the actions and inactions of the two pilots.

On 25 February 2017, an Airbus A320 left the side of the landing runway at Toronto when, for undetermined reasons, the Captain, as Pilot Flying, set up a drift to the right just before touchdown. This was then followed by a lateral runway excursion into wet grass in rain-reduced visibility which continued for 1,650 metres before the aircraft regained the runway and stopped. The Investigation noted that both the absence of runway centreline lighting and the aircraft operator’s policy of not activating the aircraft rain repellent system or applying the alternative hydrophobic windshield coating may have increased the excursion risk.

On 13 June 2013, a rushed and unstable visual approach to Marsh Harbour by a Saab 340B was followed by a mishandled landing and a runway excursion. The Investigation concluded that the way the aircraft had been operated had been contrary to expectations in almost every respect. This had set the scene for the continuation of a visual approach to an attempted landing in circumstances where there had been multiple indications that there was no option but to break off the approach, including a total loss of forward visibility in very heavy rain as the runway neared.

On 7 October 2014, an Airbus A330-300 failed to maintain the runway centreline as it touched down at Montréal in suddenly reduced forward visibility and part of the left main gear departed the runway edge, paralleling it briefly before returning to it and regaining the centreline as the landing roll was completed. The Investigation attributed the excursion to a delay in corrective action when a sudden change in wind velocity occurred at the same time as degraded visual reference. It was found that the runway should not have been in use in such poor visibility without serviceable lighting.

On 2 January 2014, the crew of an ATR 72-212A lost forward visibility due to the accumulation of a thick layer of salt deposits on the windshield whilst the aircraft was being radar positioned to an approach at Cork on a track which took it close to and at times over the sea in the presence of strong onshore winds. The Investigation concluded that the prevailing strong winds over and near to the sea in relatively dry air with little visible moisture present had been conducive to high concentrations of salt particles at low levels.