The forward movement of an aircraft, usually with engines off, using the power of a specialised ground vehicle attached to or supporting the nose landing gear. It may occur for the movement of both in service and out of service aircraft. This will affect the promulgation of procedures and the required qualification for those occupying the flight crew seats on the aircraft during the manoeuvre. As part of out of service repositioning of aircraft supervised by maintenance personnel, it may follow the Pushback from a nose-in gate of an empty aircraft with engines off. 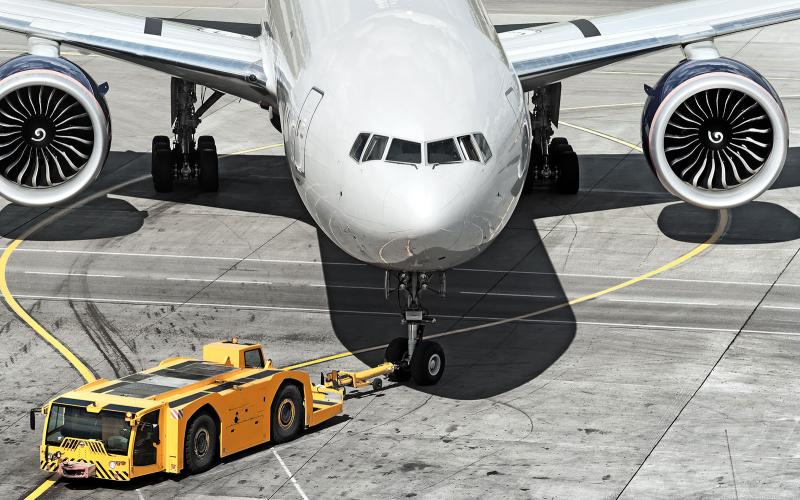 An aircraft towed by a tug

Once the person in charge on the flight deck of the aircraft has given their confirmation of ‘brakes released’ to the person in charge of the ground crew vehicle who are to carry out the tow, the ground crew become responsible for the safe manoeuvring of the aircraft in accordance with any ATC Clearance which may be required and as may have been specifically agreed beforehand.

Unless the manoeuvre is taking place outside the movement area controlled by ATC, an RTF clearance to carry it out will be required. If the aircraft is being towed to a start position or to a Push and Hold location, this normally will be obtained by the aircraft commander or other person on the flight deck. If an out of service aircraft is being repositioned, the clearance will normally be obtained by the operator of the tow vehicle. The prescribed RTF phraseology for obtaining clearance to tow is contained in ICAO PANS-ATM (Doc 4444) and ICAO Manual of Radiotelephony (Doc 9432).

Formerly, almost all aircraft types required that the ground locking pin be installed in at least the nose landing gear during any towing operation but this is no longer always the case. If a gear ground lock pin is installed for the tow, it may need to be removed after the completion of the manoeuvre. When any ground locking pins are fitted to an aircraft for towing (or any other purposes) or when they are subsequently removed, it is usual to require the recording of such action in the Aircraft Technical Log.

The ‘traditional’ method of allowing the ground vehicle to move an aircraft is to attach it to the aircraft nose landing gear by means of a towbar. These must be approved for use with a particular aircraft type and clearly marked as such since there is no universal towbar specification. An alternative method which is becoming more common for towing is the use of a specialised vehicle called a ‘towbarless tug’. This positions two low level ‘arms’ either side of the aircraft nose landing gear and these are used to engage with the aircraft gear leg and raise it slightly off the ground. 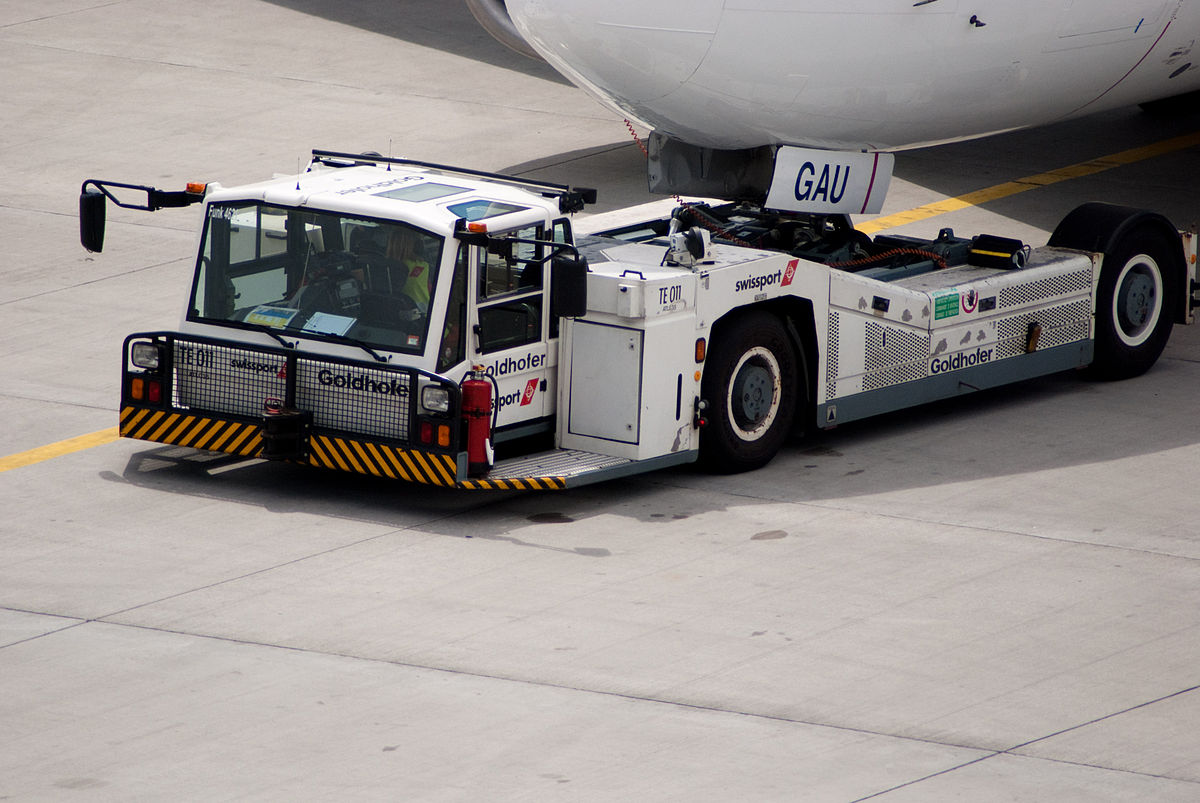 All towing is subject to the observance of any AFM limits for maximum nose landing gear steering angle.

The responsibilities of a ground crew team carrying out an aircraft tow include ensuring that no part of the aircraft structure will impact any fixed object, vehicle, or other aircraft. The ground crew should have intercom communication with the personnel on the flight deck and both parties should be able to listen to communications with ATC. In the absence from the flight deck of a pilot qualified on the aircraft type, The person in charge of the ground vehicle carrying out the tow will usually be responsible for obtaining any necessary ATC aircraft movement clearances.

The function of any flight deck occupant(s) is likely to be the appropriate operation of the aircraft braking system and the provision of sufficient aircraft electrical power to operate the radio and appropriate external and internal lighting. It is likely that where available, an APU will be running to provide electrical power and that hydraulic accumulator pressure for braking will be achieved by use of an electrical pump.

The key threat to aircraft flight safety consequent upon towing operations is collision between the aircraft under tow and another aircraft. Two 'types' of collision with potentially high risk outcomes exist:

Ground Crews must be specifically made aware of both these risks and must be fully trained on both ATC practices and the towing of the particular aircraft type involved. The later should include awareness of aircraft dimensions and turning arcs.

The evidence of accidents and incidents is that there are a number of recurrent factors leading to aircraft damage during towing:

Inadequate RTF skills on the part of the persons responsible for communicating with ATC from the towing team.

Towing collision risk is exacerbated by the conduct of such operations during the hours of darkness or in poor ground visibility and procedures should effectively address and/or constrain such operations.

A selection of events that involved an aircraft being towed:

On 27 September 2017, an Airbus A320 being manoeuvred off the departure gate at Dublin by tug was being pulled forward when the tow bar shear pin broke and the tug driver lost control. The tug then collided with the right engine causing significant damage. The tug driver and assisting ground crew were not injured. The Investigation concluded that although the shear pin failure was not attributable to any particular cause, the relative severity of the outcome was probably increased by the wet surface, a forward slope on the ramp and fact that an engine start was in progress.

On 26 December 2016, the wing of an Airbus A340-300 being repositioned by towing at Copenhagen as cleared hit an Avro RJ100 which had stopped short of its stand when taxiing due to the absence of the expected ground crew. The RJ100 had been there for twelve minutes at the time of the collision. The Investigation attributed the collision to differing expectations of the tug driver, the Apron controller and the RJ100 flight crew within an overall context of complacency on the part of the tug driver whilst carrying out what would have been regarded as a routine, non-stressful task.

On 13 January 2016 ice was found on the upper and lower wing surfaces of a Boeing 777-300ER about to depart in the late morning from Lisbon in CAVOK conditions and 10°C. As Lisbon had no de-ice facilities, it was towed to a location where the sun would melt the ice more quickly but during poorly-planned manoeuvring, one of the wingtips was damaged by contact with an obstruction. The Investigation attributed the ice which led to the problematic re-positioning to the operator’s policy of tankering most of the return fuel on the overnight inbound flight where it had become cold-soaked.

On 4 June 2002, the crew of an MD82 in the cruise at FL330 with AP and A/T engaged failed to notice progressive loss of airspeed and concurrent increase in pitch attitude as both engines rolled back to thrust levels which could not sustain level flight. The aircraft stalled and a recovery was accomplished with significant altitude necessary before engine thrust was restored and a diversion made. The Investigation attributed the engine rollback to ice crystal icing obstructing the engine inlet pressure sensors following crew failure to use the engine anti-icing as prescribed. Two Safety Recommendations were made.

On 21 August 2006, a Boeing 737-500 suffered a nose landing gear collapse during towing at the Newark Liberty International Airport. A technical crew was repositioning the aircraft in visual meteorological conditions during the occurrence. No persons were injured and minor aircraft damage occurred.

On 23 March 2004, an out of service British Airways Boeing 747-400, under tow passed behind a stationary Airbus A321-200 being operated by Irish Airline Aer Lingus on a departing scheduled passenger service in good daylight visibility and the wing tip of the 747 impacted and seriously damaged the rudder of the A321. The aircraft under tow was cleared for the towing movement and the A321 was holding position in accordance with clearance. The towing team were not aware of the collision and initially, there was some doubt in the A321 flight deck about the cause of a shudder felt when the impact occurred but the cabin crew of the A321 had felt the impact shudder and upon noticing the nose of the 747 appearing concluded that it had struck their aircraft. Then the First Officer saw the damaged wing tip of the 747 and informed ATC about the possible impact. Later another aircraft, positioned behind the A321, confirmed the rudder damage. At the time of the collision, the two aircraft involved were on different ATC frequencies.

On 10 January 2008, an Airbus A380 was damaged during push back at Singapore Changi International airport when the aircraft right wing undercarriage became stuck in soft ground adjacent to the taxiway.

On 16 February 2005, at Luton Airport, a Boeing B767-300 collided with the tug pulling it forward when the shear pin of the unserviceable tow bar being used to pull the aircraft broke. The aircraft ran onto the tug when the ground crew stopped the tug suddenly. As result of the collision with the tug the aircraft fuselage and landing gear was damaged.

On 26 June 2007, at Birmingham Airport UK, a BAe Jetstream 41 started an engine running pushback without using intercom between ground crew and flight crew. The pushback could not be completed as the towbar could not be disconnected and confusion over a decision to return the aircraft to the gate resulted in an attempt to do so with the aircraft brakes selected which caused the aircraft nose landing gear to collapse.

On 13 November 2008, a Boeing 737-800 with an unserviceable APU was being operated by Ryanair on a passenger flight at night was in collision with a tug after a cross-bleed engine start procedure was initiated prior to the completion of a complex aircraft pushback in rain. As the power was increased on the No 1 engine in preparation for the No 2 engine start, the resulting increase in thrust was greater than the counter-force provided by the tug and the aircraft started to move forwards. The towbar attachment failed and subsequently the aircraft s No 1 engine impacted the side of the tug, prior to the aircraft brakes being applied.