An altitude alerter is a device which warns the pilot when he/she is approaching a pre-set altitude or deviating from that altitude.

(a) The following aeroplanes shall be equipped with an altitude alerting system:

(1) turbine propeller powered aeroplanes with an MCTOM of more than 5,700 kg or having an MOPSC (Maximum Operational Passenger Seating Configuration) of more than nine; and

(b) The altitude alerting system shall be capable of:

(1) alerting the flight crew when approaching a preselected altitude; and

(2) alerting the flight crew by at least an aural signal, when deviating from a preselected altitude.

(c) Notwithstanding (a), aeroplanes with an MCTOM of 5 700 kg or less, having an MOPSC of more than nine, first issued with an individual CofA before 1 April 1972 and already registered in a Member State on 1 April 1995 are exempted from being equipped with an altitude alerting system.

Aircraft used for operations in RVSM airspace shall be equipped with ... An altitude alerting system; 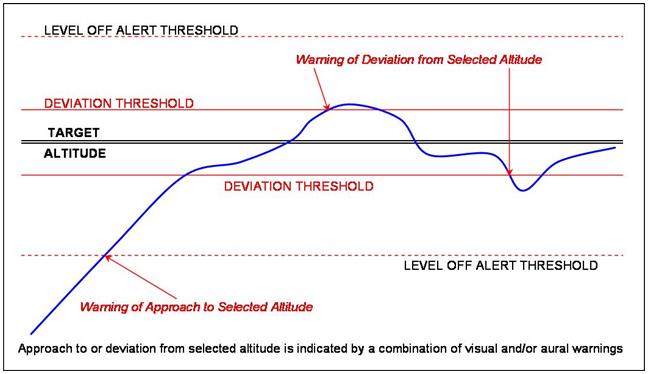 The operation is illustrated by the diagram above.

Some altitude alerters are only fitted with visual warnings while others have an aural warning as well as a light.

Typically, a momentary chime is heard and/or a light comes on at a preset point, usually after the “1000 ft to go” point. The light goes out when the aircraft comes within a specified distance (usually 200 ft - 300 ft) of the pre-selected altitude.

If the aircraft deviates by a specified amount (usually 200 ft - 300 ft from the pre-selected altitude) the light comes on together with an aural tone or a voice message such as “ALTITUDE”.