Anabatic winds are mainly created by ultraviolet solar radiation heating up the lower regions of an orographic area (i.e. valley walls). Due to its limited heat capacity, the surface heats the air immediately above it by conduction. As the air warms, its volume increases, and hence density and pressure decreases. The air becomes relatively buoyant and rises up the orographic slope (orographic lift), resulting in the anabatic flow (or wind). 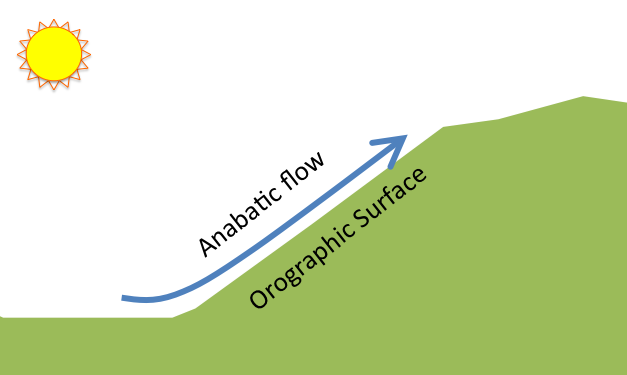 Simplistic diagram of anabatic flow as described in the text. Incoming solar radiation heats up the lower regions of the orographic surface and anabatic flow is created.

The relatively colder air is displaced, part of it travels downwards to “replenish” the valley floor, and the process of heating by conduction may begin anew.

Anabatic winds vary in intensity and occurrence; in general anabatic winds are more pronounced in the summer season when the sun's heating is more intense, and its velocity ranges from 10 to 30 knots.

Predominantly a day time phenomenon, anabatic wind may flow further than the orographic tops, cooling as it rises vertically (convection), dry-adiabatically. If the air is cooled sufficiently to reach the air's dewpoint temperature, the saturated air may condense its water vapour content, resulting in mainly convective clouds. If the air is sufficiently unstable, cumulonimbus clouds may be produced, resulting in orographic thunderstorms. 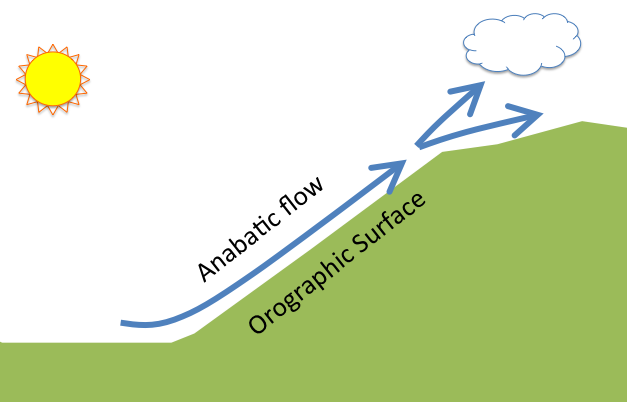 Depending on the relative position of the sun and the angle of the orographic surface to the sun, the “sunny side” of valleys are more prone to anabatic winds than the “shady side”, where relatively colder air may even flow downwards along the orographic slope, resulting in a katabatic wind. Pilots of small piston-engine aircraft are advised to fly on the sunny side of valleys especially in higher altitudes in order to avoid katabatic winds.