The article does not cover the coordination procedures:

The coordination and transfer of control of a flight between successive ATC units is done by a dialogue comprising the following stages:

The procedures for coordination between ATC units are described in various documents, the most notable being:

These documents define, inter alia, the standard procedures for transfer of flights between the units. These procedures may explicitly require a coordination for each flight or they may define situations where such coordination is not necessary. An example of the latter is the silent transfer of control procedure which allows the transfer of aircraft to be executed without coordination if a specified set of conditions is met (e.g. if two successive aircraft cross the boundary at the same flight planned fix, maintaining the same level, the separation between them does not fall below 10 NM and they are diverging after crossing the boundary then there is no need for the transferring controller to call the accepting and coordinate the transfer. The estimate still needs to be provided, though, either in the form of a verbal or an OLDI message).

A popular phrase in LoAs is "...unless otherwise verbally coordinated". This generally means that although there are standard procedures established, it is possible to deviate from most of them if everyone involved agrees.

Verbal coordination is usually done using telephone lines but in some cases a dedicated hotline connection can be established (usually for coordination between tower and approach). Face-to-face communication may also be used sometimes if different units are located in the same room (e.g. approach and tower, approach and area). The use of this method however is usually discouraged by the local procedures.

Non-verbal (electronic) coordination may include OLDI messages (preliminary information(ABI), estimate (ACT), revision (REV), request on frequency (ROF), etc.). If the ATM systems of the two units are closely integrated, various electronic coordinations may be available, including release procedure, coordination for a direct route or transferring an aircraft on a heading, the ability to counter-propose (a heading, level, fix, etc.), the ability to highlight a particular aircraft to support the phone coordination and many others.

Electronic coordinations are generally used in routine and less complex situations. They require less time to perform (usually a few seconds) and generally lower controller workload. Unlike verbal coordinations, these do not require both controllers' attendance at the same time.

The main limitation of electronic coordinations is that they are only applicable to pre-defined scenarios. Also, they are not suitable for time critical situations where a timely response is essential.

Poor coordination (or lack thereof) may result in:

The advise given in this section is derived from experience and common sense and is not intended to supercede or replace local procedures. 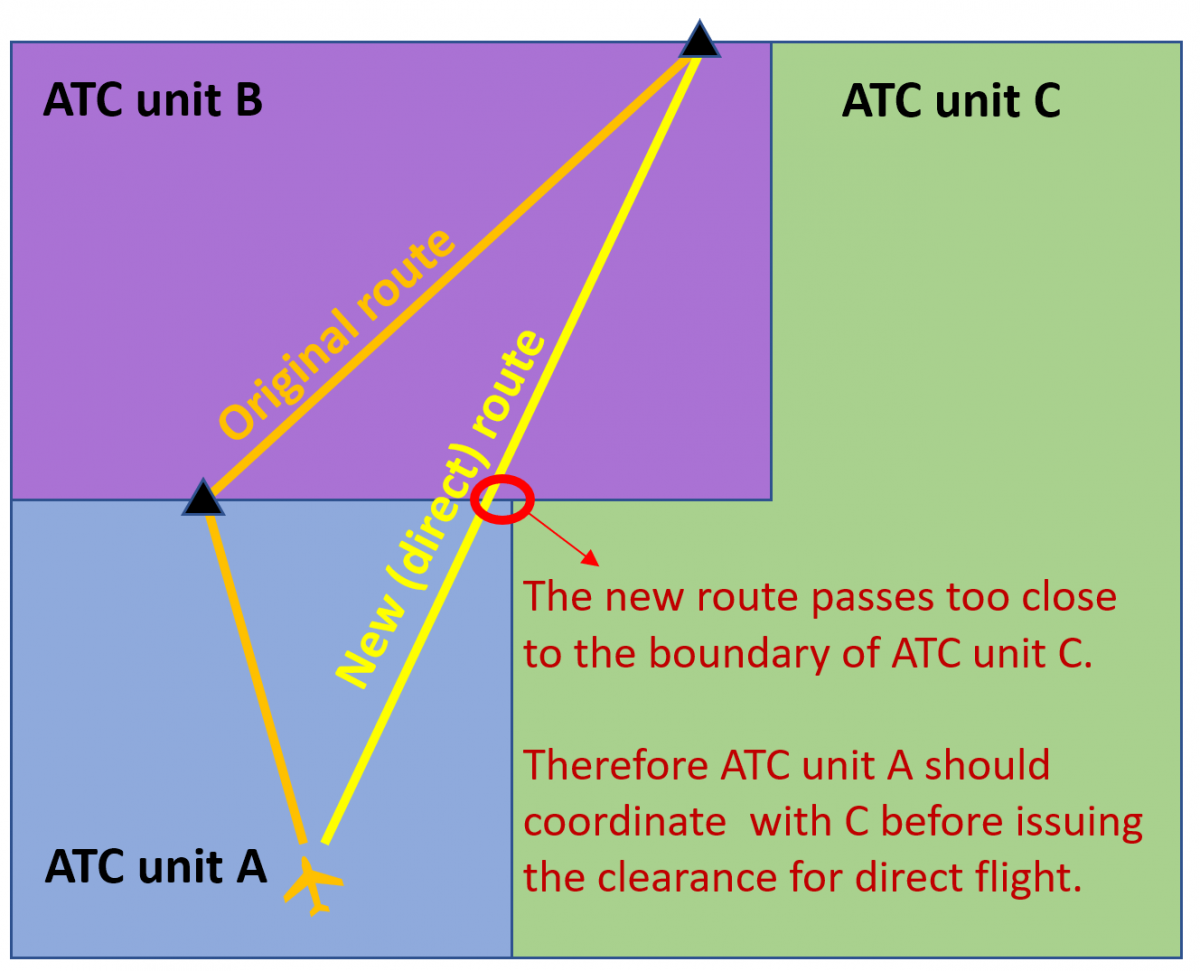 ATC unit A should coordinate with both B and C

This section contains events that have "ATC Unit Co-ordination" as a contributing factor.

On 22 September 2017, a Boeing 747-400F taxiing in after landing requested and received further taxi instructions from GND on reaching its clearance limit when the controller assumed it had already crossed the active runway ahead. An Airbus A330-300 crew beginning takeoff saw the 747 beginning to cross, rejected the takeoff and stopped well clear of the other aircraft. The Investigation found that the GND controller had failed to check which side of the runway the 747 was on before issuing his clearance and noted that the controllable red stop bar system was not active or required to be.

On 29 January 2015, a Boeing 737-800 crew attempting to fly an NDB approach to Bergerac, with prior awareness that it would be necessary because of pre-notified ILS and DME unavailability, descended below 800 feet agl in IMC until an almost 1000 feet per minute descent when still over 8 nm from the runway threshold triggered an EGPWS ‘TERRAIN PULL UP’ warning and the simultaneous initiation of a go-around. The Investigation found that the PF First Officer was unfamiliar with NDB approaches but had not advised the Captain which resulted in confusion and loss of situational awareness by both pilots.

On 10 April 2018, a Boeing 737-800 crew making a night takeoff from Brasilia did not see a small aircraft which had just landed on the same runway until it appeared in the landing lights with rotation imminent. After immediately setting maximum thrust and rotating abruptly, the 737 just cleared the other aircraft, an Embraer 110 whose occupants were aware of a large aircraft passing very low overhead whilst their aircraft was still on the runway. The Investigation attributed the conflict primarily to controller use of non-standard phraseology and the absence of unobstructed runway visibility from the TWR.

On 6 February 2013, ATC mismanagement of an Airbus A320 instructed to go around resulted in loss of separation in IMC against the Embraer 190 ahead which was obliged to initiate a go around when no landing clearance had been issued due to a Boeing 737-800 still on the runway after landing. Further ATC mismanagement then resulted in a second IMC loss of separation between the Embraer 190 and a Boeing 717 which had just take off from the parallel runway. Controller response to the STCA Alerts generated was found to be inadequate and ANSP procedures in need of improvement.

On 21 April 2006, a Boeing 737-800 cleared to take off from Brisbane began to do so whilst a vehicle was crossing the same runway in accordance with an ATC clearance issued on a different frequency. The aircraft crew saw the vehicle as they accelerated but decided that it would be clear by the time they reached its position. The vehicle driver reported that he was still within the runway strip when the aircraft passed. Since the occurrence, the adoption at Brisbane of the ICAO recommended procedure of using one frequency for all runway occupancy is being “actively considered”.

On 29 July 2008, a Boeing 737-700 taking off from Toronto in accordance with its TWR clearance was about a third of the way down the runway when three vehicles, which had previously been cleared to enter the same runway by a GND controller were seen. The aircraft became airborne approximately 760 metres from the vehicles.

On 10 June 2011 an ATC error put a German Wings A319 and a Hahn Air Raytheon 390 on conflicting tracks over Switzerland and a co-ordinated TCAS RA followed. The aircraft subsequently passed in very close proximity without either sighting the other after the Hahn Air crew, contrary to Company procedures, followed an ATC descent clearance issued during their TCAS ‘Climb’ RA rather than continuing to fly the RA. The Investigation could find no explanation for this action by the experienced crew - both Hahn Air management pilots. The recorded CPA was 0.6 nm horizontally at 50 feet vertically.

On 18 January 2012, ATC error resulted in two aircraft on procedural clearances in oceanic airspace crossing the same waypoint within an estimated 2 minutes of each other without the prescribed 1000 feet vertical separation when the prescribed minimum separation was 15 minutes unless that vertical separation existed. By the time ATC identified the loss of separation and sent a CPDLC message to the A340 to descend in order to restore separation, the crew advised that such action was already being taken. The Investigation identified various organisational deficiencies relating to the provision of procedural service by the ANSP concerned.

On 5 November 2011, ATC cleared a Virgin Australia Boeing 737-700 to climb without speed restriction through an active parachute Drop Zone contrary to prevailing ATC procedures. As a result, prescribed separation from the drop zone was not maintained, but an avoiding action turn initiated by the 737 crew in VMC upon recognising the conflict eliminated any actual risk of collision with either the drop aircraft or its already-departed free-fall parachutists. The incident was attributed to a combination of inadequate controller training and inadequate ATC operational procedures.

On 17 August 2012, a Swiss A320 being positioned under radar vectors for arrival at Geneva was inadvertently vectored into conflict with a Cessna Citation already established on the ILS LOC for runway 23 at Geneva. Controller training was in progress and the Instructor had just taken control because of concerns at the actions of the Trainee. An error by the Instructor was recognised and de-confliction instructions were given but a co-ordinated TCAS RA still subsequently occurred. STCA was activated but constraints on access to both visual and aural modes of the system served to diminish its value.

On 16 August 2007, a Westjet Boeing 737-700 which had just landed began to cross a runway in normal daylight visibility from which an Airbus A320 was taking off because the crew had received a clearance to do so after an ambiguous position report given following a non-instructed frequency change. When the other aircraft was seen, the 737 was stopped partly on the runway and the A320 passed close by at high speed with an 11 metre clearance. The AMASS activated, but not until it was too late to inform a useful controller response.

On 21 August 2010 a Golden Air Flyg ATR 72 under ATC control in Class C airspace was vectored close to three parachutists who had been dropped from a helicopter as part of an air show because of confusion between the ATC unit with responsibility for the incident airspace and the adjacent unit to which that responsibility had been delegated because it was nearest to the air show site. Additional confusion was caused by poor R/T practice by both ATC units and by different portrayal of a holding pattern on charts held by ATC and he flight crew.

On 8 August 2011, an Embraer 145 was given take off clearance from runway 32L at O Hare in day VMC without the controller making the required check for potentially conflicting arrivals to runway 09R which pass over the runway. When the controller realised that the departing aircraft would conflict with an Embraer 135 approaching 09R, he told his aircraft to stay low and the runway 09R controller to send his aircraft around. Radar data indicated that the 135 on go around had crossed runway 32L about 125 feet above and just over 100 metres in front of the departing 145.