This article is based exclusively on a study carried out by EUROCONTROL which led to a summary document on this subject being published in 2006 - see the references in Further Reading at the end of the article.

The purpose of the study was to identify best practices that can help define common solutions for managing shiftwork in European Air Traffic Management (ATM). The first part of the study contains a literature review about the impacts of shiftwork, its consequences for health, safety, productivity and efficiency, as well as its social implications. The second part “Shiftwork Practices Study - ATM and Related Industries” isolates common findings and presents solutions that could facilitate the planning and management of flexible working practices to improve safety and productivity in the safety critical shiftwork environment of ATM.

Shiftwork practices were collected for the study from various areas such as international ATM, medical, police and airline industries. There are an enormous amount of different shift systems. In the last few years, systems with short rotations have spread considerably. Alternate shift systems are more common in Europe than permanent systems.

Shiftwork in the ATM Context

Compared to other industries that make use of shiftwork, ATM has common features with some of them but also differs substantially in other aspects.

The most significant difference to most other industries is the substantial variation of workload during the day (inbound and outbound traffic peaks), during the week (weekday vs. weekend) and during the year (seasonal factors i.e. summer vs. winter traffic).

Within in the ATM context, the following aspects are especially important:

Shiftwork and the Individual

There are reliable scientific findings that working at night causes a de-synchronisation of body functions. Human beings are day-active creatures, who are programmed to perform and be active during the day and to recover during the night. The problem arising from rotating shift systems, especially if night shifts are included, is the activation of the employees against their body clock. They have to work during the nights and to rest during the day.

The increased physical stress by working nights manifests itself in:

The reduced efficiency leads to:

Night shiftworkers frequently mention troubles with body functions that are related to the circadian rhythm. The following are often expressed:

A worker’s age is another crucial factor. The older employees are, the more difficult is the adaptation to night work. A phase model developed by EUROCONTROL describes shiftwork throughout a working career:

The following list summarises the problems faced by shiftworkers in working shift:

The Relation of the Shiftwork to Performance and Safety

Present findings on night and shiftwork prove a higher risk of physical and mental impairments for employees working in atypical shift systems as compared with employees with regular working hours. The increased risk of impairments arises from the following factors:

The study established that:

The research emphasises that a best shift system in ATM cannot be defined. The specific conditions of the work situation, the workload, its spatial and temporal distribution, the individual conditions such as age, attitude, and social support as well as the organisational frame play a vital role in the design of shift systems. However, taking into account the findings from existing research the following guidelines are provided for shiftwork design. For best practices recommendations[1] on shift design derived from the literature review, see Figure 1 below. 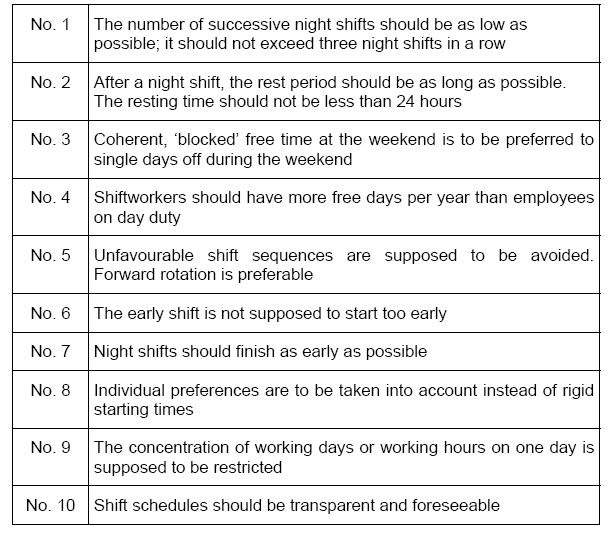 The literature review[2] conducted by EUROCONTROL has demonstrated that, despite considerable knowledge on shift management, many questions remain open and need to be specified for the particular situation faced by Air Navigation Service Provider. The issues of cost-effective shift management and productivity were rarely investigated and, if so, they were secondary to the study of accident prevention and health promotion.