While there are various reasons for a level change, this article focuses on the conflict solving aspect.

Changing an aircraft's level is often the easiest way for a controller to solve a conflict, i.e. a situation where two (or more) aircraft are expected to be closer than the prescribes separation minima.

After deciding to solve a conflict by a level change, the controller must choose between climb and descent. The former is generally preferred, as it leads to better flight efficiency. However, in some situations descent is the better (or the only) option, e.g.:

If the controller is in doubt as of which option is preferable (and if both are available), the controller may first ask the pilot (time and workload permitting). The fact that the range of available speeds is reduced at higher levels should also be considered. If the climb is to be combined with a speed restriction, this should be coordinated with the crew beforehand.

In many situations a level change would require the aircraft to climb or descend by 2000 feet (so that the new level is appropriate to the direction of the flight). However, sometimes it is better to use an opposite level, i.e. one that is only 1000 feet above/below. This is often a good solution in case of crossing conflicts, i.e. where the paths of the two aircraft only intersect at one point and the level change is expected to be temporary.

It should be noted, that a few risks exist with this solution:

The picture below show a situation where the use of opposite level is preferable. The level change will be required for a few minutes only and there is no opposite traffic. 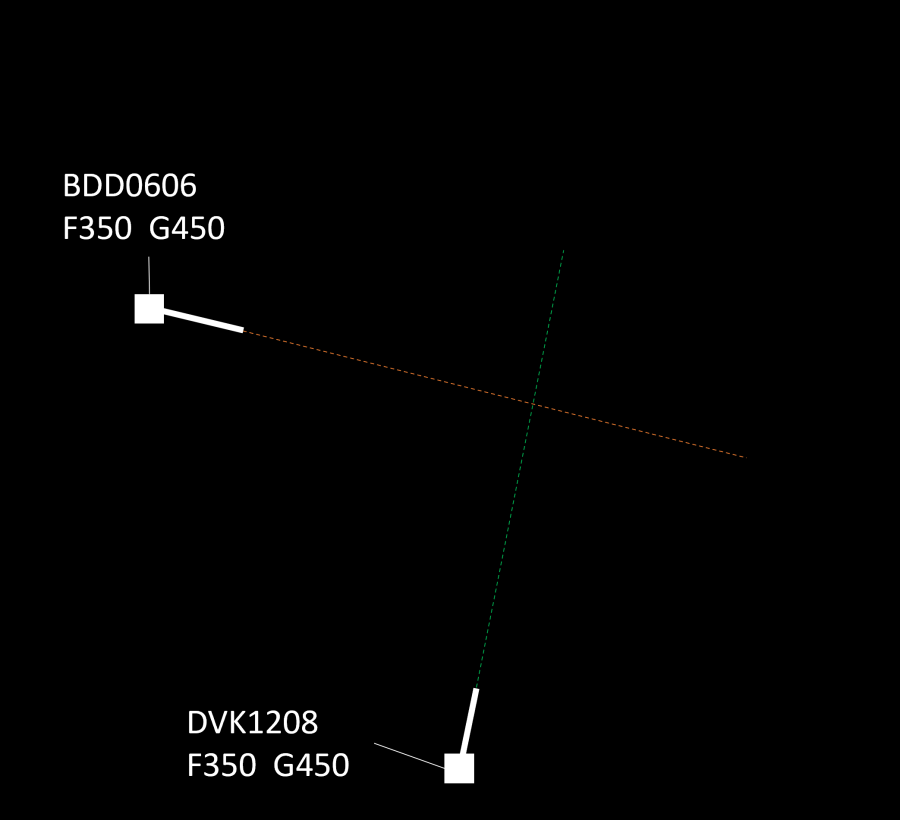 The picture below show a situation where the use of opposite level is not feasible because of opposite traffic. Therefore, a level change of 2000 ft is preferable.

The use of opposite levels can sometimes be justified when the conflict is at the sector exit point. This solution, however, is subject to approval from the downstream controller. The feasibility of this option depends on the geometry of the conflict (are the aircraft diverging after the point of conflict) and on the traffic situation (are there aircraft that are flying at the same level on an opposite track).

As a general rule, when two aircraft are at the same cruising level, the preceding aircraft would have priority, i.e. the succeeding aircraft will have to climb or descend. Other criteria may be specified in the manual of operations or other documents containing local procedures. In any case, the controller may deviate from these procedures based on the traffic situation. For example, if changing the level of the succeeding aircraft would create a new conflict (and thus, a new intervention would be necessary), the controller may opt to work with the preceding aircraft. Naturally, flights in distress, or those performing [[SAR]] operations, would have priority over other traffic. This includes obtaining (or maintaining) the desired level while a lower priority traffic (e.g. a commercial or general aviation flight) would have to change level. Other priorities may be specified in local procedures (e.g. flights with head of state on board).

Normally, vertical speed is not considered an issue in case of a level change solution to a conflict. This is because in most cases the instruction is issued well in advance (5-15 minutes before the potential separation breach) and the level change is 1000 or 2000 ft, which means that vertical separation will be achieved comfortably prior to losing the required horizontal spacing. Nevertheless, there are some situations where it might be necessary to ensure that the vertical speed will be sufficient. These include:

In such situations the controller should either: