“Situations arise when two or more radio transmissions occur, simultaneously, on the same frequency. In this context ‘simultaneous’ is defined as two or more transmissions that overlap in such a way that the controller is not aware that more than one transmission has occurred leading to a potential safety hazard.” (VoIP - Air Traffic Management (ATM) system operational and technical requirements, EUROCAE, 2009-02)

As signals overlap, the system is naturally making a selection on the type of overlap, the relative strength of the signals, the frequency variation, distance between transmitters and receivers, use of one or multiple ground receivers. 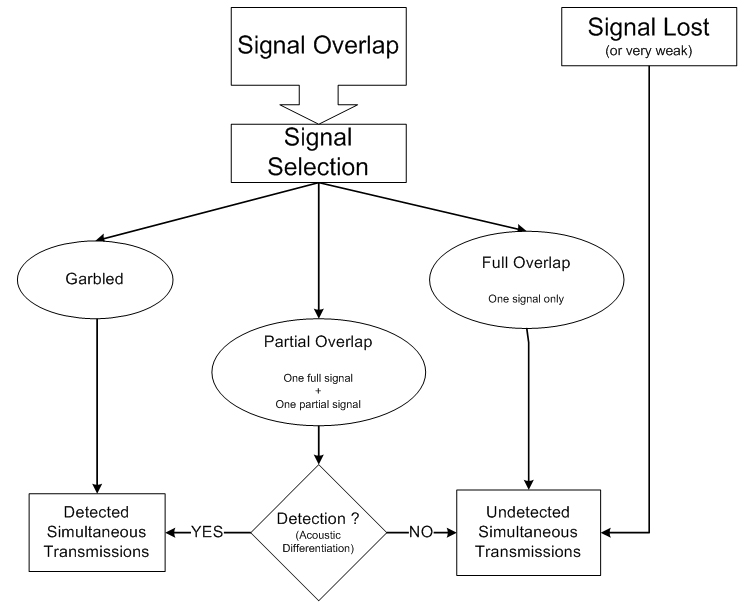 Several scenarios have been identified as related to the occurrence of simultaneous radio transmissions:

Scenario 2: Simultaneous transmissions by the ATCO and a pilot (also known as “stepped on transmission”):

Scenario 3: “Multi-receiver Blindspot” is another source of loss of signal (or transmission) which could also be considered in the context of Undetected Simultaneous Transmissions. It corresponds to wide range radio field operations used in difficult terrain leading to lack of reception for some pilots and to the signal being lost. Either of these scenarios or any combination of them could result in the occurrence of Undetected Simultaneous Transmission (USiT).

The following events include "Blocked Transmission" as a contributory factor:

On 13 February 2019, a Boeing 787 departing Amsterdam was given a non-standard long pushback by ATC in order to facilitate the use of its stand by an incoming flight and when a Boeing 747 was subsequently given a normal pushback by a single tug driver working alone who was unaware of the abnormal position of the 787 and could not see it before or during his pushback, a collision followed. The Investigation concluded that the relevant airport safety management systems were systemically deficient and noted that this had only been partially rectified in the three years since the accident.

On 18 June 2010, an ATR 42 began a daylight take off on runway 28 at Zurich without ATC clearance at the same time as an A340 began take off from intersecting runway 16 with an ATC clearance. ATC were unaware of this until alerted to the situation by the crew of another aircraft which was waiting to take off from runway 28, after which the ATR 42 was immediately instructed to stop and did so prior to the runway intersection whilst the A340 continued departure on runway 16 .

On 29 May 2007, a Saab 340 aircraft that was holding on an angled taxiway at Auckland International Airport was inadvertently cleared to line up in front of a landing Raytheon 1900D. The aerodrome controller transmitted an amended clearance, but the transmission crossed with that of the Saab crew reading back the line-up clearance. The pilots of both aircraft took action to avoid a collision and stopped on the runway without any damage or injury.

Some of the effects of the blocked transmissions might include:

The following parameters or factors are linked to the phenomenon, either as contributors or as a ‘inherent’ system characteristics: