A brake is a device for slowing or stopping the motion of a machine or vehicle, or restraining it from starting to move again.

Aircraft brakes, for land based aircraft, are almost exclusively located on the main wheels although there have been some aircraft over the years which have also had nose wheel brakes. Operation of the brakes has evolved from a single lever applying all brakes symmetrically, to heel operated pedals, to toe operated brake controls incorporated into the rudder pedals. With the foot operated controls came the ability to apply left or right brakes independently allowing use of differential braking to steer the aircraft during ground operations and to maintain directional control during that portion of the takeoff or landing roll when the airspeed is too low for the aerodynamic controls to be effective.

In early aircraft, transmission of the brake control input to the braking device was mechanical - most often through cables. This was inefficient and could only be effectively used in small aircraft. The solution was to develop hydraulically activated brakes and this remains the standard on the vast majority of aircraft flying today. In small aircraft, the system can be powered by a master cylinder and does not need hydraulic pumps. In larger aircraft, pumps are required to provide the necessary hydraulic fluid pressure and volume. In the continuing quest to develop lighter, more efficient aircraft, electrically activated brakes are starting to come into service on some of the newest generation passenger aircraft.

Early aircraft had a single braking system with no backup or redundancy. This was seen as impractical by the operators and unacceptable by the regulating authorities so manufacturers were soon incorporating more robust braking systems into their designs. Some of the earlier solutions simply addressed the loss of the primary hydraulic pump and incorporated hand pumps or electrically driven hydraulic pumps to provide an alternate source of hydraulic pressure. These solutions did not address failures due to loss of fluid and were deemed inadequate. To overcome this, some manufacturers such as Convair incorporated a compressed air system into their designs for emergency braking. While it achieved the requirement of providing an independent means of activating the brakes, it was limited in that it did not allow for differential braking and in that the tank contained a finite amount of compressed air. Braking redundancy in most large passenger aircraft today is achieved by multiple, independent hydraulic systems backed up by accumulators. These systems allow for several layers of failure without resulting in total loss of braking capability. 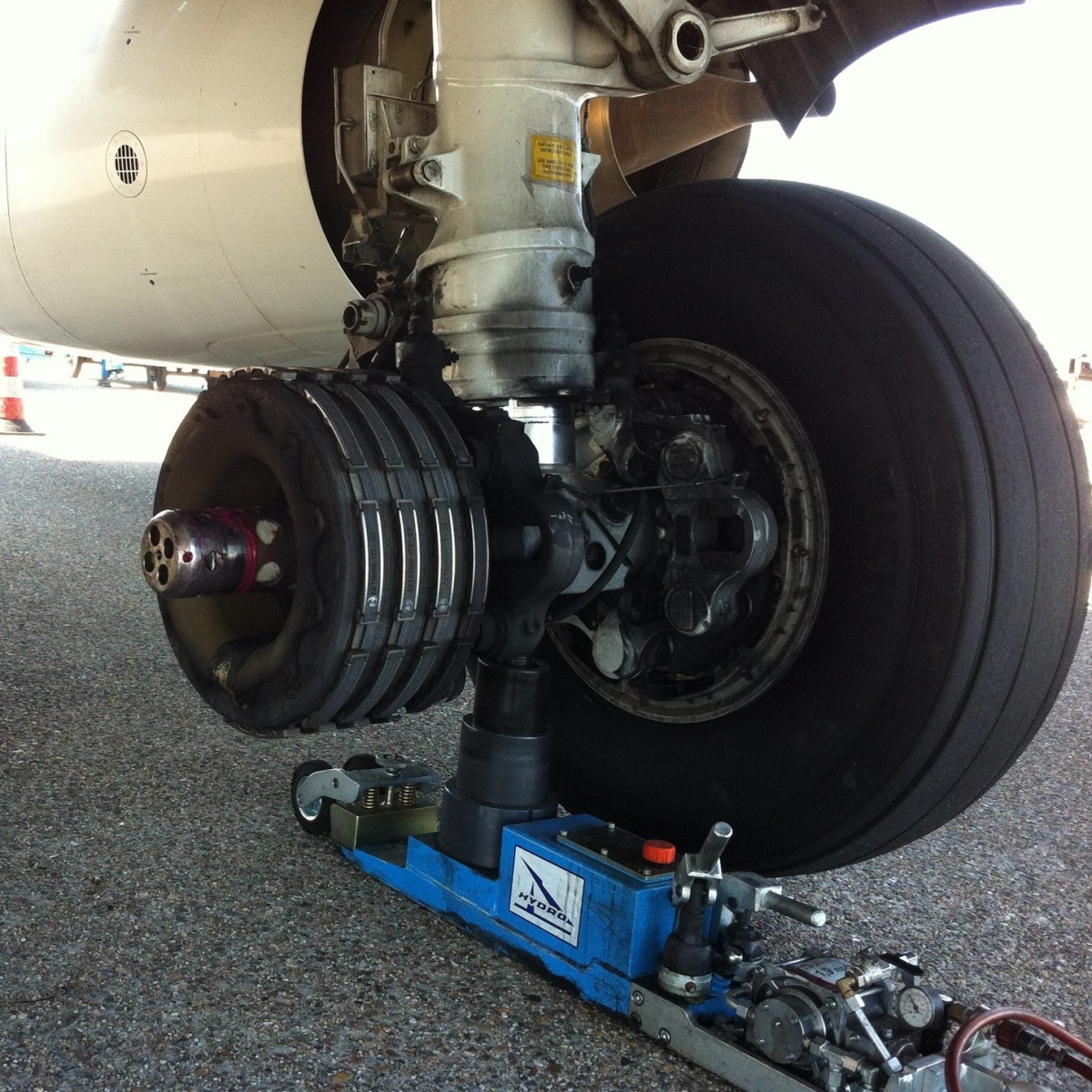 The brakes themselves have also evolved over the years. Drum style brakes were still prevalent on many aircraft designed and built in the 1940s. Inefficient drum brakes have given way to disk brakes, initially with single and now more commonly with multiple rotors. The rotors are most commonly made from iron or steel but in the last 20 years, more and more aircraft have been equipped with carbon fibre brakes. There are multiple reasons for this evolution but the two most compelling ones are weight reduction and efficiency. Efficiency is particularly critical, for as aircraft get larger and their weight increases, the brakes must be capable of dissipating more energy. The kinetic energy of an aborted takeoff or a landing is largely converted to heat by the wheel brakes. Carbon brakes are still fully functional and retain the ability to absorb energy and slow the aircraft at and well beyond temperatures at which steel brakes have lost their efficiency and have started to “fade”.

It is a certification requirement that the braking system of an aircraft has the ability to stop an aircraft at maximum certified takeoff weight with the reject initiated at decision speed. The certification process must be done with all brakes worn to near their service limit (nominally 10% remaining life) and the brake and wheel heat sink must be robust enough that no intervention in terms of fire fighting or artificial cooling is required for 5 minutes after the aircraft has been stopped. The use of ground spoilers and maximum anti-skid braking is used during the certification test; however, reverse thrust on the engines or propellers is not allowed.

Anti-skid, auto-brake, brake temperature indicators and brake fans are all systems which enhance the performance of the aircraft brakes.

The anti-skid system, through various mechanisms, compares the speed of the aircraft with the rotational speed of each main wheel. If the speed of any wheel is too slow for the existing aircraft speed, the brake on that wheel (or wheels) is released momentarily to allow the wheel speed to increase and prevent the wheel from skidding. The system is fully automatic and is active from immediately after initial wheel spin up on landing (during which time brake activation might (or might not) be inhibited) down to a design limited minimum speed; usually about 15 knots. Anti-skid systems are designed to minimise aquaplaning and the potential tyre damage which can occur when a wheel is locked or rotating at a speed which does not correspond to the speed of the aircraft. Anti-skid removes the possibility of reverted rubber skids caused by locked wheels. An anti-skid system also greatly improves stopping distance on substandard surfaces such as gravel or grass and is particularly effective on surfaces contaminated with frozen contaminants such as ice or slush by ensuring maximum effective breaking.

Auto-brake systems can be used on takeoff where they will provide maximum braking in the event of a rejected takeoff and on landing where they will provide a scheduled rate of deceleration (dependent upon the auto-brake level selected) using only a single brake application. These features combine to optimize the brake usage with respect to the requirement and to minimize brake wear.

Brake fans reduce brake cooling times by using wheel mounted electric fans to blow ambient air across the brake and wheel assemblies. Note that the maximum recommended temperature for takeoff as indicated on the instrument panel may have a different value dependent on if the brake fans have been used or not.

All aircraft should be chocked once parked to prevent unplanned movement.