Carbon Monoxide (CO) is a highly poisonous gas and exposure can quickly lead to short-term symptoms, long-term health issues, and even death. Prolonged and repeat exposures at lower concentrations can lead to the same conclusions.

CO is a colourless, odourless and tasteless gas, and is a by-product of the incomplete combustion of carbon-containing materials. Known as the “silent killer”, poisoning from CO is responsible for nearly 500 deaths per annum in the USA and a similar number in Europe; these are typically in industrial and domestic situations. For example, in the UK alone: 50 people die, 200 people are hospitalised and 4,000 admitted to Accident & Emergency units annually, due to CO poisoning[1].

When inhaled CO is absorbed easily into the bloodstream where it attaches itself to haemoglobin with an affinity over 200 times that of Oxygen. This has a direct affect on the performance of those parts of our physiology that rely on Oxygen for proper functioning. In this respect, the symptoms are very similar to Hypoxia. CO also reacts, chemically, with other proteins and enzymes in the blood which can lead to damage to the brain, heart and nervous system.

The U.S. Occupational Safety and Health Administration (OSHA) defines two limits for unhealthy CO exposure: an upper limit of 100 parts per million (ppm) in unventilated spaces; and, an average exposure over 8 hours of 55 ppm.

Most healthy people will have existing levels of CO in their blood between 0 and 10 ppm; this can vary greatly depending on exposure to (for example) inner city road traffic and poorly maintained domestic appliances. Smokers will have raised CO levels of between 20 and 40 ppm. Therefore, exposure to relatively small amounts of CO, for many, can increase health risks.

It is important for everyone to be aware of the “onset” symptoms of CO poisoning; these are summarised in the following Table. 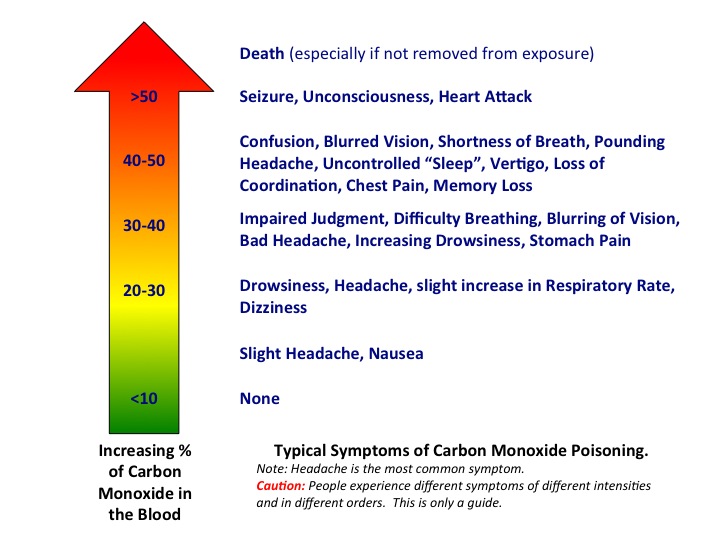 Onset of drowsiness can be very swift, and unless action is taken immediately to decrease exposure and reverse the concentration of CO in the blood (see below), sleep followed by unconsciousness will be inevitable.

However, like Hypoxia many of the symptoms of CO poisoning will make it difficult, if not impossible, to self-diagnose. This is a problem because the pilots most at risk from CO poisoning are those flying small piston-powered aircraft, solo. A good example of this is the case of Doctor Robert Frayser who awoke only after his Comanche had ran out of fuel and crashed into a field; he thought he was still in the air[2]!

Sources of Carbon Monoxide in Aviation

In aviation the most typical sources of CO are exhaust from: internal combustion engines (piston-driven aircraft, airside vehicles and ground servicing equipment); aircraft turbine engine exhaust; and, Auxiliary Power Unit (APU) exhaust. Although odourless and tasteless, CO produced from these sources will usually be mixed with other, compounds, gases and vapours that can be detected through smell and taste. CO will also be created from combustion of materials during an aircraft emergency involving fire.

Whilst on the ground, CO produced externally to an aircraft can enter cabins and flight decks via open doors and hatches. It is also possible that exhaust gases from other aircraft (e.g. positioned in front whilst taxiing or waiting for departure) can enter unfiltered via the bleed air and air-conditioning system.

Poorly designed and/or maintained aircraft, as well as damaged aircraft can result in CO, and other gases, entering the cabin and flight deck; either directly or via the air-conditioning system. This can occur both on the ground and in-flight.

Piston powered aircraft produce high concentrations of CO and, by design, carry the highest risk that CO can enter the cabin during flight. Because many of these aircraft are flown solo, the impact from CO ingress can be the most severe.

Typically most piston powered aircraft obtain their cabin heating by directing fresh (ram) air over the engine muffler (silencer). If there are any cracks, holes or poorly fitting components in the exhaust system, then CO-rich exhaust gases can enter the cabin. Engine exhaust may also enter the cabin through inadequately sealed firewalls and wheel wells etc.

Valid evidence exists from the U.S. Federal Aviation Administration (FAA) that CO poisoning is a risk to flight crew and passengers of piston powered aircraft. First there are numerous accident reports, both fatal and non-fatal, including:

Secondly, analysis of toxicology samples from fatal U.S. aircraft accidents between 1967 and 1993 showed that at least 360 victims  had been exposed to sufficient carbon monoxide before or after the crash to impair their abilities[2]. Note that some CO poisoning occurred post crash (probably due to fire) and that CO poisoning in these cases could not be claimed as the cause of the accident.

It is possible that flight crew and passengers on piston powered aircraft have been exposed to low concentrations of CO, and deduced that their symptoms were due to airsickness, fatigue, hypoxia etc. Because, no incapacitation occurred and the symptoms alleviated after removal from exposure, then these incidents have never been reported.

The best form of protection against CO poisoning is to avoid exposure. This is best achieved by the application of an effective maintenance programme in compliance with current regulations and manufacturers guidelines, and applied by appropriately qualified and licensed engineers and technicians. Particular attention should be given to the heating and ventilation system to ensure that the exhaust system components and manifolds are not leaking; especially in older aircraft.

Because of the risk and severity of consequences associated with CO and piston powered aircraft it is sensible to have a means of CO detection and warning. Various methods are available, from inexpensive single-use spot detectors to fully automatic, reusable, calibrated electronic devices.

In January 2022, the U.S. National Transportation Safety Board (NTSB) recommended to the Federal Aviation Administration (FAA) for a second time that the FAA require CO detectors in general aviation aircraft. NTSB said it has identified 31 accidents between 1982 and 2020 attributed to CO poisoning. Twenty-three of those accidents were fatal.

If no detection and warning system is available, then it is important that pilots are familiar with the onset symptoms and react immediately. An effective emergency drill may contain the following elements:

On the ground with doors and hatches open, or when taxiing behind another aircraft, CO from external sources may enter the cabin and this will be immediately noticed by the smell of other exhaust gases. For the majority of people this experience will be little more than an irritable nuisance (like walking along a city street full of traffic), but some people may report feeling nauseous and faint. The irritation will soon disappear as the source of CO is removed.

In-flight it is extremely unlikely that CO can enter the cabin or flight deck in any meaningful quantity, unless there is a fire on-board. Most large aircraft air-conditioning systems involve mixing unfiltered bleed air from the engine compressor (or APU when on the ground) with filtered re-circulated cabin air. Typical filters, on modern aircraft, can remove particles, bacteria, viruses, and various other organic compounds. The quality of cabin air is recognised generally as excellent, with the entire cabin air being replaced and filtered 20 to 30 times per minute.

There are situations where the cabin air can become contaminated with lubricating oil, hydraulic fluids and de-icing and anti-icing fluids. These include engine and APU oil seal failures and inappropriate application of de-icing and anti-icing fluids into engine and APU air intakes. Of these, the only possible source for CO is when leaking aircraft engine lubrication and hydraulic oils are subjected to high temperatures. In these circumstances these oils can, through a process known as pyrolysis, degrade into several different compounds, which, if temperatures are high enough, may include CO[3]. However, where laboratory tests have detected production of CO from pyrolysis the concentrations have been too small to cause any health concern from long-term exposure; typically 3.5ppm, which is within our normal “metabolic” range of 0 to 10ppm[4].

The European Union Aviation Safety Agency (EASA) examined the International Civil Aviation Organisation (ICAO) database for events involving poor quality of cabin air on large aircraft (commercial jet and turboprop aircraft with a zero fuel weight greater than 5,700kg) from 1970 to 2009. It notes that none of these events involved a catastrophic accident or fatalities, aeroplane handling was never compromised and no hazard or risk of injury presented to the passengers and flight crews[5].

On the ground, the solution to external sources of CO entering the cabin and flight deck is to close doors and hatches. The air-conditioning system can either be used to ventilate the cabin or shut-off to prevent further pollution, depending on the location of the source.

Overall, the effective application of mandatory maintenance programmes, quality assurance and safety systems, and routine inspections and cleaning programmes, significantly reduce the chances of any contaminant (including CO) entering the aircraft from the engines and Auxiliary Power Unit via the bleed air system[4].

Because CO poisoning is not considered a risk to flight crew and passengers in large jet and turboprop aircraft, and there is no mandated requirement or means of detecting CO and giving warning, there are no specific emergency procedures that can be employed. However, there are operational and emergency procedures to protect against hypoxia and fire, smoke and fumes. As the presence of unhealthy levels of CO is only likely to occur in conjunction with Fire, smoke and fumes, these procedures will offer the best protection.