In November 2007, China implemented RVSM, between 8,900m (FL291)and 12,500m (FL411) inclusive, in the Shenyang, Beijing, Shanghai, Guangzhou, Kunming, Wuhan, Lanzhou and Urumqi FIRs and Sector AR01 (island airspace) of the Sanya CTA. The China RVSM airspace is exclusive RVSM airspace and aircraft that are not RVSM compliant may not operate within it unless specific waivers (for example, State aircraft) have been granted.

A Flight Level Allocation Scheme (FLAS) is the foundation for the Reduced Vertical Separation Minimum (RVSM) program. In most areas of the world, implementing States have used a consistent FLAS based upon flight levels expressed in the unit of feet. However, China, in developing its FLAS, has taken a different approach.

The China FLAS was designed to satisfy their military requirements of applying metric flight levels while at the same time mitigating the relatively big altitude difference between RVSM metric flight level and feet flight levels of neighbouring countries. It also eliminates the phenomena of 900 feet vertical separation associated with metric RVSM flight levels and makes the vertical separation between aircraft 1000 feet or more. To accomplish this, clearances are provided in metres, converted using a specific China RVSM table and flown in feet.

To ensure compliance, the operator shall ensure that the pilot has been trained on China RVSM Flight Level Allocation Scheme (FLAS) before operating in China airspace. Procedures for the RVSM airspace include (but are not limited to): 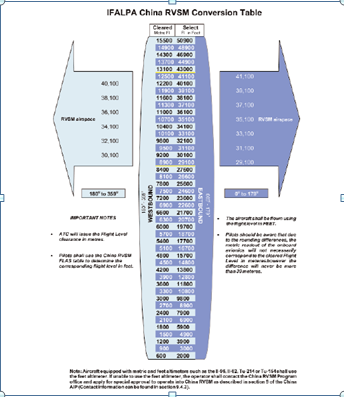 A typical China RVSM Conversion Table is as depicted in the illustration. In this example, the dark blue lines are for eastbound traffic and the light blue for westbound.

As an operational example, a westbound aircraft might be cleared by ATC to climb to and maintain (FL) 11600 metres. Referring to the table, 11600 metres converts to 38100 feet.

The pilot would set FL381 in the aircraft altitude select panel and climb as cleared.

Upon reaching FL381, if required for the region of flight, the pilot would report level at 11600 metres.

In the same manor, an eastbound aircraft might be cleared to descend to (FL) 9800 metres. Using the Conversion Table, the pilot would extract FL321, set that flight level in the aircraft altitude select panel and descend calling level at the cleared metric flight level if required.