Coastal fronts are shallow (less than 1 km deep) boundaries that separate colder, continental air masses from much warmer and moisture laden maritime air masses. Temperature differences across the front can be as much as 30-50oF (17–28oC). Typically, coastal fronts develop in coastal waters or within 100–200 km of the coast during the cooler half of the year when the land is cold relative to the ocean. In the United States, coastal fronts are most frequent in New England, the Middle Atlantic states, the Carolinas, and Texas.

The typical coastal front is oriented quasi-parallel to the coast and may extend for several hundred miles. At times with a strong onshore flow, it can move well inland. During the winter, the coastal front may mark the boundary between frozen and nonfrozen precipitation. Given that coastal front development usually precedes synoptic-scale cyclogenesis and marks an axis of enhanced thermal contrast and a maximum in cyclonic vorticity and convergence, the coastal front often serves as a boundary along which intensifying synoptic- scale cyclones move poleward.

Coastal thermal contrasts are augmented by differential diabatic heating where the onshore flow has passed over oceanic thermal boundaries such as the Gulf Stream and the adjacent continental airstream has passed over snow-covered land. 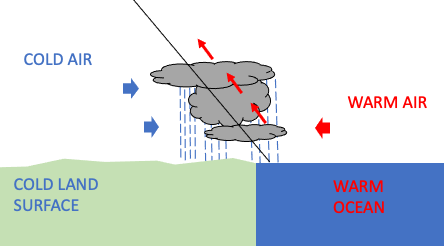