The common cold is incurable, we are all vulnerable (globally) to catching them and many of the symptoms can affect human performance, especially in the areas of sensory perception, balance, ability to concentrate, fatigue, and physical pain. Flying whilst infected with a cold increases the risk of physical damage to the inner ear and sinuses.

The common cold is a viral infection of the upper respiratory tract, which can sometimes lead to infections of the lungs, especially in young children. Over 200 types of different viruses have been identified as causing the common cold, however, the causes of 20% to 30% of adult colds have not been identified, although these too are considered to be viral[1]. Frequently there is more than one virus present in an infection.

Adults typically contract 2 to 3 colds annually (children up to 6), and the infection can last for 2 weeks, although most people feel recovered in much less time.

Common cold symptoms are various and multiple, and include:

The familiar symptoms that we all associate with a common cold are typically first noticed 2 to 3 days after becoming infected; however, within 24 hours some people may start sneezing, notice a chill feeling and suffer a headache. Severity of symptoms usually peak at 3 to 4 days from infection; however, each infection is different and people’s tolerance levels differ.

A fever in adults is unlikely to be caused by a common cold, but can occur in young children. Many of the symptoms listed above may also be caused by other illnesses and infections. Therefore, consultation with an appropriate medical professional is advised if you are uncertain that your symptoms are due to a common cold.

With any of the typical common cold symptoms it can be difficult to achieve a restful night’s sleep. This increases the risk of being affected by tiredness during the working day, and of becoming fatigued during the course of a cold. Both tiredness and fatigue are safety issues for critical workers such as pilots, engineers, cabin crew and air traffic controllers etc.

Cold symptoms can be physically uncomfortable and therefore cause distraction and loss of vigilance. Furthermore, cold symptoms can also give rise to mental lethargy, making team interaction, communication, judgement and decision-making difficult.

Physical performance can be adversely affected, especially due to feelings of muscle weakness and exacerbated by fatigue and tiredness. Also the losses of sense of smell and taste and a slight impairment in hearing may impact directly on safety at work.

Some cold symptoms can lead to temporary deafness, or reduced hearing ability, in one or both ears.

The Common Cold and Flying

It is recommended that if you have a cold that you do not fly; this should be enforced by airlines in the case of aircrew, and aircrew are required to self-report any symptoms of cold, flu, or similar.

Apart from the reduced levels of performance, in any workplace, that arise when someone is ill with a common cold, as mentioned above, aircrew are exposed to changes in air pressure that can have great impact. Aircraft are typically pressurised to equivalent altitudes of between 4,000 and 8,000 feet. If a decompression occurs in-flight, then aircrew and passengers may be exposed to air pressure altitudes up to 30,000 feet or more. In this latter case, an immediate and rapid descent will be necessary to below 10,000 feet.

The middle ear and sinuses are cavities that contain air equalised in pressure to the surrounding (ambient) pressure. The middle ear achieves this via the Eustachian Tube which joins the middle ear cavity to the nose and throat. Therefore as aircraft climb and descend there needs to be regular equalisation in pressure between these cavities and the cabin air. If this equalisation is not possible, or is not regular enough, then the pressure difference between the ambient air and that inside our head will cause pain. In the middle ear the pain (otic barotrauma) is caused by distortion of the eardrum, and in the sinuses it (sinus barotrauma) can be felt above the eyes, behind the nose and in the cheeks[2] Most air travellers (and divers) will be familiar with the sensation of ears popping by themselves in ascent, and the need to force the issue in the descent by clasping the nose and blowing into a closed mouth (Valsalva Method).

When suffering from a cold the soft tissues surrounding the sinuses and the Eustachian Tube can swell making the inward movement of air during the descent difficult, and sometimes the Valsalva method ineffective. Even moderate amounts of pain will distract an aircrew member from being able to conduct their tasks – they become, effectively, incapacitated. In severe cases of barotrauma an aircrew member can be grounded for a long period, and may suffer a burst eardrum.

If one ear equalises, but the other doesn’t, then a form of pressure vertigo can be experienced as dizziness, which is not helpful for aircrew, especially pilots. The inner ear contains semi-circular canals which automatically detect accelerations in three dimensions and give us our “sense” of balance – where is up, down, left and right, and which way are we moving. Colds can also affect the inner ear mechanism and therefore lead to risk of dizziness and spatial disorientation – both very serious flight hazards[3].

Despite anecdotal “evidence” about the aircraft cabin environment increasing one’s chances of catching a cold (or other infections) there is still no clear evidence that it does. Whilst air travel (or any other form of travel) may increase the risk due to numbers of people being in close proximity, evidence suggests that cabin air quality does not[4]. The filtered air in today’s aircraft is of very high quality. 99.9% of bacteria and viruses are filtered out and the air is completely exchanged at least 20 times per hour. 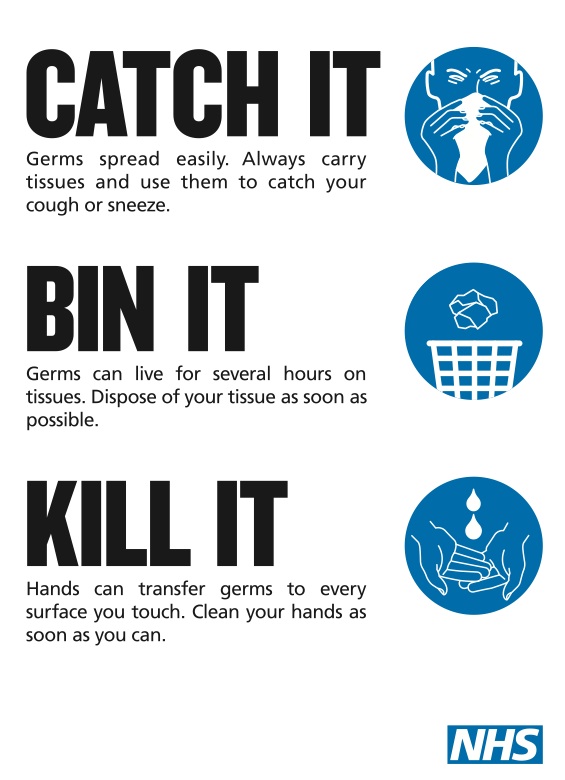 The common cold virus is typically transmitted via infected airborne droplets, direct contact with infected nasal secretions, or through direct contact with contaminated objects. The viruses may survive for prolonged periods in the environment and can be picked up by people's hands and subsequently carried to their eyes, nose or mouth, where infection occurs.

Transmission is common in kindergartens and schools due to the close proximity of many children with little immunity and frequently poor hygiene. These infections are then brought home and passed to other family members. Rather than wearing a mask and white gloves every time we leave the house, a more positive and useful approach to prevention (for society, and our colleagues) is to consider how we may each prevent the spread of germs, whether we have an infection or not. Coughing and sneezing into tissues will prevent us expelling droplets into the atmosphere for others to breathe in. Immediate disposal of the tissue will prevent others from coming into direct contact with any mucous. Then immediately washing our hands will prevent us from contaminating any objects that we touch. The UK National Health Service[5] promote this strategy in their campaign to stop the spread of flu, using the slogan CATCH IT, BIN IT, KILL IT. For this strategy to be effective, personal supplies of tissues and anti-bacterial hand wipes or gel need to be available. There is some evidence that people with weakened immune systems are more susceptible to catch colds, and then to suffer further complications. Therefore, maintaining good general health and well-being, through diet, exercise, relaxation, rest and sleep may reduce the risk of catching a common cold, and lessen the impact if a cold is contracted.

There is no cure for the common cold, and a healthy adult patient will recover fully within two weeks, and often within one week i.e. 4 to 5 days after first noticing the symptoms. Alleviation from the multitude of symptoms is best obtained through lots of rest and keeping hydrated. Many over-the-counter medications are available to address specific symptoms, including analgesics for muscle aches, analgesics and antiseptics for sore throats, and nasal decongestants. But none of these will speed up recovery, and the benefits of some may be purely placebo. Aircrew and others with jobs that may influence flight safety should use care selecting over-the-counter cold remedies at the pharmacy. Importantly, these medicines can have some side effects, such as drowsiness, dizziness, and insomnia that are not safe for flying or other aviation-related duties. Therefore, before self-medicating, it is always advisable to consult your Company medical officer, or your home doctor, and inform them of your role at work. Antibiotics are not used to treat a cold, however, colds can occasionally lead to bacterial infections of the middle ear or sinuses. If you suspect an ear or sinus infection you should visit your doctor for assessment as these conditions may improve with antibiotics.