A conditional clearance is a clearance issued by an air traffic controller which does not become effective until a specified condition has been satisfied.

Example of conditions that may be included in a conditional clearance include:

A danger of misunderstanding, ambiguity or other confusion could exist in a conditional clearance, for example:

the pilot might follow the wrong aircraft. To reduce the risk of such confusion ICAO specifies that:

Conditional phrases, such as “behind landing aircraft” or “after departing aircraft”, shall not be used for movements affecting the active runway(s), except when the aircraft or vehicles concerned are seen by the appropriate controller and pilot. The aircraft or vehicle causing the condition in the clearance issued shall be the first aircraft/vehicle to pass in front of the other aircraft concerned.

ICAO also specifies the precise format of a conditional clearance:

In all cases a conditional clearance shall be given in the following order and consist of:

c) the clearance; and

d) brief reiteration of the condition, for example:

The following events include the use of conditional clearance as a contributory factor:

On 3 August 2017, a Boeing 737-900ER landing at Medan was in wing-to-wing collision as it touched down with an ATR 72-500 which had entered the same runway to depart at an intermediate point. Substantial damage was caused but both aircraft could be taxied clear. The Investigation concluded that the ATR 72 had entered the runway at an opposite direction without clearance after its incomplete readback had gone unchallenged by ATC. Controllers appeared not to have realized that a collision had occurred despite warnings of runway debris and the runway was not closed until other aircraft also reported debris. 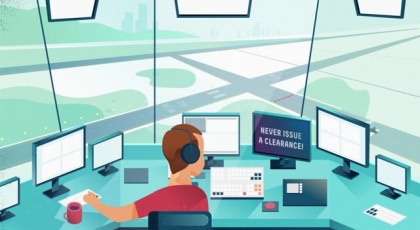