Conflict. Predicted converging of aircraft in space and time which constitutes a violation of a given set of separation minima.

Conflict search. Computation and comparison of the predicted flight paths of two or more aircraft for the purpose of determining conflicts.

Detecting conflicts between aicraft is an important part of the air traffic controller job and arguably the most complex one. Once a conflict is properly identified the resolution is relatively straightforward - the controller chooses an appropriate method (e.g. level change, vectoring, speed control, etc.), implements the plan and monitors aircraft compliance. If the situation remains undetected, however, this may result in loss of separation, late (and more abrupt) manoeuvres, STCA/TCAS activation or worse.

If all aircraft are assigned different levels, and are not expected to climb or descend, then there are no conflicts. Most commercial operations however take place in the RVSM layer which means that this situation is unlikely. Therefore, normally the first thing to be done in a surveillance environment, is a "same level scan", i.e. looking for aircraft that are maintaining the same level. This initial step identifies aircraft that need further examination. The second phase is to discard the pairs that are "obviously" non-conflicting, e.g. flying at the same speed to the same point with long distance between them, those whose paths do not cross, etc. After that, the minimum distance of the "suspicious" pairs is determined and, if necessary, a plan for solving the conflict is created.

Climbing and descending flights present a special challenge as they require more checks to be done, e.g.:

These checks may become more complex if the aircraft climbs or descends through a high number of flight levels (e.g. climbing from FL 140 up to FL 360). This results in significant change in groundspeed (due to wind and IAS variations) which hinders precise calculations. The effect may be mitigated by system support tools based on aircraft performance data (as opposed to surveillance-derived data) and controllers are often able to make reasonably precise estimates based on experience. Nevertheless, such situations require much more attention than aircraft in level flight.

Factors that may cause a conflict to be missed include:

A number of tools have been developed to assist controllers in determining and calculating conflicts, the most popular being: 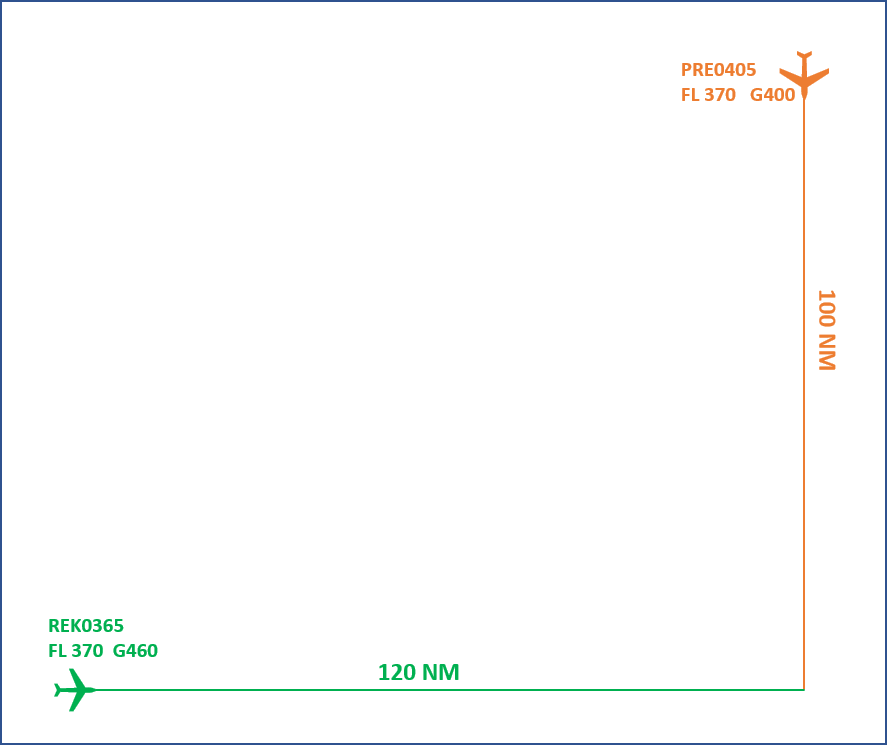 Example of conflict calculation using range and bearing lines: PRE0405 will reach the crossing point in 15 minutes (with a groundspeed of 400 kt and a 100 NM distance). By this time, REK0365 would be 20 NM behind if flying at the same speed. However, because it is faster by 60 kt, it will close at a rate of 1 NM per minute, i.e. after 15 minutes the distance will be 5 NM. After the crossing point the separation will continue to reduce (due to the vectoring geometry and the fact that REK365 is faster) which means that the separation at the CPA will be less than 5 NM which is the standard normally used in en-route environment. Therefore the controller needs to take action to resolve the conflict.