Continuous Descent Arrival (CDA) is an aircraft operating technique in which an arriving aircraft descends from an optimal position with minimum thrust and avoids level flight to the extent permitted by the safe operation of the aircraft and compliance with published procedures and ATC instructions. (EUROCONTROL).

The objective of a CDA is to reduce aircraft noise, fuel burn and emissions by means of a continuous descent, so as to intercept the approach glidepath at an appropriate altitude for the distance to touchdown.

Keeping aircraft as high as possible for as long as possible can be more effective at reducing noise impact on the ground than Low-Power/Low Drag (LP/LD [1]) techniques alone.

In a conventional, non-CDA, approach the aircraft descends stepwise, with portions of level flight in-between. By performing a CDA the aircraft remains higher for longer and operates at lower engine thrust. Both of these elements induce a reduction in fuel use, emissions and noise along the descent profile prior to the point at which the aircraft is established on the final approach path.

The ideal CDA starts at the top of descent and ends when the aircraft starts the final approach and follows the glide slope to the runway. Typically CDAs are not possible all the time, not for all arriving flights and not always for the whole descent profile. But at more and more airports measures are taken to use CDA to the extent possible and to gradually increase the percentage of CDA-flights. 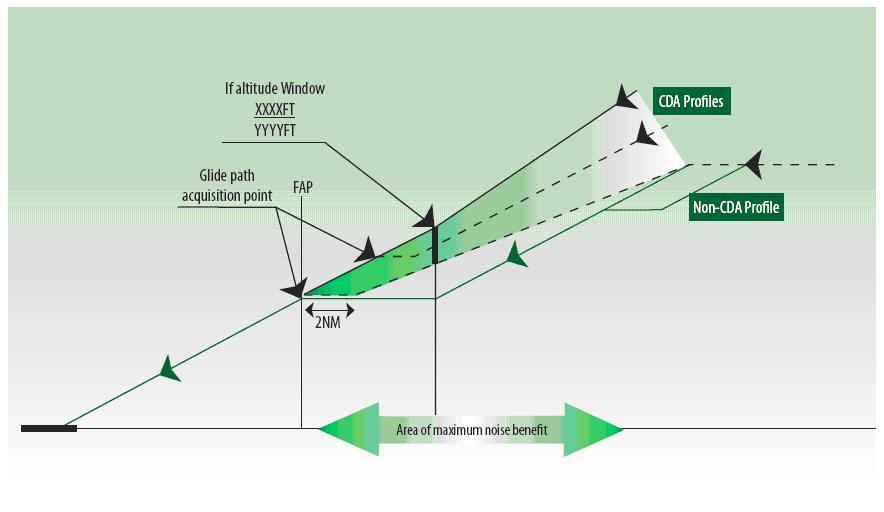 Comparison of CDA and non-CDA-profile

In order to facilitate and harmonise implementation of CDA, an International Civil Aviation Organisation (ICAO) CDA implementation Manual is under development. As an intermediate step, for Europe, CDA guidance material has been published by EUROCONTROL: CDA Implementation Guidance Information

At PAN-European level a Joint Industry CDA Action Plan was adopted. It sets out specific actions to be undertaken by the European aviation industry to ensure the rapid deployment of CDA for as many flights as possible.

The Action Plan will ensure the widespread adoption of harmonised CDA in accordance with ICAO and EUROCONTROL guidance:

The objective of the plan is to:

It was recognized that the CDA offers an early opportunity to save over 150,000 tonnes of fuel per year, worth around 100 million Euro per annum in ECAC, whilst at the same time reducing CO2 emissions by almost 500,000 tones per annum and reducing noise impact on the ground by around 1-5 dB per flight. CDA is a priority requirement of the SESAR Master plan for the IP1 timeframe and is expected to become a widespread practice before the end of 2013.

As a component of the NextGen initiative, the FAA has authorized development of arrival procedures with vertical profiles optimised to facilitate a continuous descent from the top of descent to touchdown. OPD flight procedures use the capabilities of the aircraft Flight Management System (FMS) to fly a continuous, descending path without level segments, based on the actual performance of the aircraft under current flight conditions.

Two vertically-optimized arrival procedures were designed and successfully instituted at Los Angeles International Airport (Los Angeles) as part of the Southern California Redesign. The routes into KLAX allow aircraft to glide down to the runway, using minimal power, starting approximately 70 nautical miles east of the airport.

Typically in a continuous descent approach, an aircraft begins its final descent from a distance of about 12 nautical miles and an altitude of 4000 feet. It then maintains a steady 3° angle of descent during its approach. For many airports, the opportunity to implement a CDA is limited because of the volume of air traffic on approach and in the vicinity of the airport especially during busy daytime periods. When approaching traffic is heavy, a pilot may need to adjust throttles, flap settings, and extend landing gear to maintain safe and consistent spacing with other aircraft in the terminal airspace. Extending flaps, and landing gear increases drag, which requires the application of additional thrust to keep the aircraft flying at the same speed.