This article describes the safety issues related to and use of Controller Pilot Data Link Communications (CPDLC). While CPDLC is expected to contribute to an improved safety of flight operations there are some issues that could lead to safety occurrences unless properly addressed. The main objective of the article is to identify some best practices for CPDLC users (both pilots and controllers) and provide ideas for mitigation actions to be taken if safety is threatened.

Safety issue(s): In case of miscommunication between the two controllers (e.g. due to high workload), a situation can occur where the executive controller is not fully aware of the situation and makes decisions based on wrong assumptions.

Less Communication on the Radio Frequency

Background: Use of CPDLC frees up the frequency and generally helps reduce miscommunication (e.g. due to similar callsigns).

Safety issue(s): The use of CPDLC reduces pilots’ situational awareness as they cannot follow the data link communication between the controller and other aircraft.

Defences: Depending on circumstances, voice can be preferred over CPDLC for situations where multiple aircraft are involved in a potential conflict.

Background: CPDLC allows controllers and pilots to send long and complex messages. The good thing is that the other party no longer needs to memorize the request/clearance and confusion is less likely (e.g. “Turn left heading 340, climb FL320” is very difficult to be interpreted as “Turn left heading 320, climb FL340”).

Safety issue(s): If a clearance (request) can only be partially complied with (fulfilled), the reply will be “unable” and it will address the entire message. This will result in a higher workload. Also, long and complex messages are more likely to cause ambiguity.

Defences: The use of complex messages (even if allowed by the system) should be avoided in general.

Not Clear Definition of “Time-Critical”

Background: CPDLC is only to be used in non-time-critical situations.

Safety issue(s): There is no strict definition of “time-critical”. Different people may interpret this matter differently. Also, depending on the circumstances, a situation may unexpectedly become time critical. 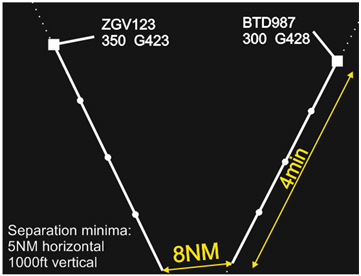 Example: ZGV123 is maintaining FL350 but is supposed to descend to FL250. As there is a crossing conflict with BTD987 the controller issues a descend instruction via CPDLC “ZGV123 DESCEND FL250, DESCEND AT 2000ft/min MINIMUM”. This instruction would be generally safe if voice communication was used, but with CPDLC there is much uncertainty about the manoeuvre commencing. If ZGV123 starts the descent right after receiving the uplink message, the conflict will be resolved safely. If however the manoeuvre starts two minutes later the assigned vertical rate may not be sufficient to ensure separation with BTD987 and this is the moment when the situation becomes time-critical.

Defences: Controller’s instructions usually contain some time reserve to account for the pilot’s response and the transitional period of the instruction execution (e.g. the increase of the vertical speed from 0 to the assigned one). The reserve has to be extended, if practicable, with the response lag of CPDLC, or, if this seems infeasible, voice should be considered.

In the above example: The instruction for descent is issued about 4 minutes before the separation falls to 8NM. There is one minute reserve (the pilot is supposed to achieve the desired rate of descent within this period) and the time necessary to reach FL290 is three minutes. The pilot is usually supposed to respond to a CPDLC instruction within two minutes. The descent rate that ensures the separation with BTD987 is 6000ft/min which is obviously unfeasible. The instruction would be safe, however, if uplinked 6 minutes before the moment when the separation is 8NM.

Background: With CPDLC it is much easier (compared to using voice) to transmit a message to an aircraft.

Defences: In case a wrong uplink message has been used, controllers should quickly resolve the situation, preferably using voice (e.g. (call sign) DISREGARD CPDLC MESSAGE, (new instruction)). An attempt to use CPDLC to correct the previous message can easily lead to ambiguity or another error.

Background: With CPDLC it is possible that an aircraft is using voice to communicate with one ATS unit (or sector) while being CPDLC connected to another.

Safety issue(s): Two controllers form different sectors being able to issue (contradicting) clearances to the same aircraft may lead to misunderstanding, increased workload for all parties concerned and sometimes to loss of separation.

Defences: ATS procedures may restrict the use of CPDLC by ATCOs (e.g. even if technically possible, CPDLC should not be used before initial contact by voice is made or after the transferring process has commenced).

The following events feature CPDLC as a contributory factor: