Poorly executed cross wind takeoffs, or attempting a takeoff when the cross wind component is beyond the Manufacturer's limit for the aircraft type, can lead to runway excursions. That outcome is often associated with prevailing runway surface friction being other than dry - possibly wet but more often contaminated. Some of the issues following also apply to the maintenance of directional control during a landing. Runway excursion on landing is a more common occurrence than during takeoff and is covered in the article Cross Wind Landings. 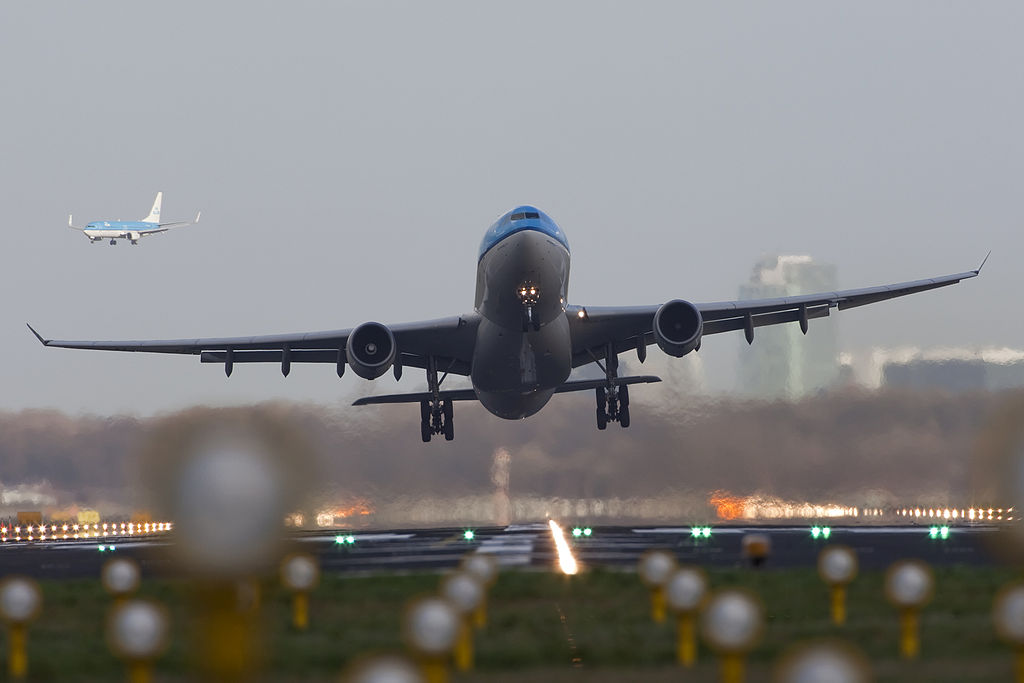 During a cross wind takeoff, there is a tendency for the upwind wing to lift and for the aircraft to turn into the wind (weathercock) as the aircraft accelerates. In some aircraft, roll spoilers will deflect when aileron input is made which, in turn, can exacerbate the tendency for the aircraft to turn into wind. The roll spoiler effect typically becomes active at around 10 degrees of aileron deflection. When flying aircraft equipped with roll spoilers it is important to know whether/exactly how much stick or control wheel can be applied without causing asymmetric roll spoiler deployment. When appropriate, pilots new to type may find it helpful to have another pilot to watch the roll spoilers when the aircraft is stationary so they can establish precisely the amount of into wind aileron can be applied before spoiler deployment. If excessive use of roll control causes roll spoiler extension, performance will be reduced. V1 may be compromised by the reduced lift and greater drag, invalidating accelerate/stop distance and second segment climb performance. Reducing the FLEX/Assumed temperature or using Full Power will reduce the margin of error. In general, in a strong crosswind the less time spent on the ground the better.

Irrespective of aircraft size, undercarriage configuration or number of engines, the primary means of directional control during the takeoff run is based on aerodynamic forces generated by the primary flight control surfaces: in particular, the rudder and the ailerons. The elevator is also used to maintain a downward force on the nosewheel to maximize its effectiveness. However, all of these control surfaces require an aircraft specific, minimum airflow speed across the surface before it will become effective. Appropriate rudder deflection should be made at the commencement of the takeoff. However, directional control during the initial (low speed) portion of the takeoff roll may need to be accomplished by other means, dependant on aircraft type, such as differential braking, nosewheel or tailwheel/tailskid steering; differential thrust is also an option, though its use can be potentially hazardous, especially for the inexperienced.

With a strong crosswind at 90 degrees to the runway, gusts may well create a tailwind and the downwind engine intake(s) on a large commercial airliner may be blanked by the fuselage, potentially creating an engine surge problem unless the engines are accelerated smoothly to establish a good intake airflow. The tailwind component and slow acceleration will both affect performance.

The following are some of the more common techniques for aircraft with tricycle undercarriage:

FULL aileron should be held into the wind as the takeoff roll is started. This control position should be maintained while the airplane is accelerating until the ailerons become effective at which time aileron deflection should be decreased to maintain wings level. The runway centerline should be maintained with the rudder which, in most cases, is effective as soon as power is applied. Normally, this will require applying downwind rudder pressure. In strong crosswind conditions, use of differential brakes may be required during the initial acceleration unless the nosewheel is steerable through the rudder pedals, when differential braking should not be required. When takeoff power is applied, propeller torque or P-factor, will yaw the airplane to either left of right, depending on propeller direction of rotation. The yaw may either counteract or aggravate the weathercocking tendency caused by the crosswind from the right. In all cases, be ready to quickly apply whatever rudder pressure/deflection is required to keep the airplane rolling straight down the runway.

Aileron handling as above. However, the rudder does not become effective until reaching an Indicated Airspeed, as defined by the manufacturer, ; this is usually in the region of 80 knots. Until that speed is reached, the one pilot must maintain the centreline utilising the nosewheel steering tiller whilst the other pilot "flies the wing" using the aileron technique described above. Where only one tiller is fitted, the left seat pilot will be required to maintain directional control in the early stages of take-off, whether Pilot Flying (PF) or Pilot Monitoring (PM). The PF will apply appropriate rudder deflection from the beginning of the takeoff roll. Forward elevator pressure should be maintained until the rudder is fully effective to maximize nosewheel capability. When the rudder effectivity speed is attained, the LS pilot releases the nosewheel tiller and the PF assumes full control of the aircraft.

At low speed, the aircraft can be directionally controlled via the nosewheel controlled through the rudder pedals. As the aircraft accelerates and the rudder becomes effective, the nosewheel steering capability is automatically reduced. With this level of sophistication, the manufacturer's guidance for aircraft handling during takeoff is likely to become very prescriptive.

The following are some of the more common techniques for tailwheel aircraft:

FULL aileron should be held into the wind as the takeoff roll is started. This control position should be maintained while the airplane is accelerating until the ailerons become effective at which time aileron deflection should be decreased to maintain wings level. The runway centerline should be maintained with the rudder which, in most cases, is effective as soon as power is applied. Normally, this will require applying downwind rudder pressure. In strong crosswind conditions, use of differential brakes may be required during the initial acceleration. Raise the tail off of the ground as soon as the elevator is effective. When takeoff power is applied, propeller torque or P-factor, will yaw the airplane, either counteracting or aggravating the weathercocking tendency depending on the direction of crosswind and rotation of the propeller. In all cases, the pilot should be ready to quickly apply whatever rudder pressure/deflection is required to keep the airplane rolling straight down the runway and make adjustments as necessary.

A lockable tailwheel may be fitted to help reduce weather cocking tendency during takeoff and landing. Takeoff technique as above. In addition, differential engine power can be used during the initial takeoff roll to aid in directional control until the rudder is effective, though this is potentially hazardous for the inexperienced. Raise the tail off of the ground as soon as the elevator is effective.

Cross Wind as a Factor in Runway Excursions

Investigation of Runway Excursions on takeoff, where the cross wind has been a significant factor, usually identify one or more of the following factors:

The origin of such a decision usually lies in poor CRM. Sometimes this relates to the ‘original’ decision to commence preparation for departure which later becomes clearly questionable but is not effectively reviewed. Both Operator Culture and Authority Gradients between flight crew members can play a role in this scenario.

This may arise directly from poor skills, especially where the simulator training for the aircraft type is carried out in devices which cannot realistically replicate low level wind velocity. It may be related to insufficient understanding of the ‘basic theory’ of directional control during takeoff, or it may be related to the use of inappropriate, or possibly unapproved or non-recommended techniques for aircraft control during acceleration to takeoff speed.

When a runway is declared to be contaminated, there are clearly specified processes for measuring and communicating surface friction. A reduction in friction index or braking action normally correlates to a reduced maximum allowable cross wind value and the reduction mat be considerable. The modified cross wind takeoff limitations or recommendations should be published in the AFM or the Operations Manual.

Aircraft limitations for dry runway operations can be expected to be unequivocal in their specification and may be qualified by runway width. By contrast, the limitations or recommendations for runways which are not dry may be difficult for flight crew to apply on the basis of the information they have on runway surface condition and cross wind component at any point in time. It is important that flight crew have clear Operations Manual guidance on restrictions to dry runway crosswind limitations and any necessary clarification on how to interpret the guidance material for wet or contaminated surfaces.

Wind, wake and turbulence induced by obstacles may affect the handling and performance of aircraft during both takeoff and landing. Aircraft are, in general, much more vulnerable to disturbed wind velocity profiles during the final stage of the approach to a landing than during takeoff. However, significant variance in wind direction and velocity over the length of the takeoff run, caused by natural or man-made obstacles, can create a significant challenge to the maintenance of directional control during takeoff.