The Accident as a Situational Example

Weather conditions were bad and forecast to deteriorate below minimum landing conditions. This led the crew to select alternate landing sites and load additional reserve fuel. Furthermore, it was the start of the spring school holidays; the flight was full, and a refuelling stop was required on the way back from the first leg of the flight.

When the captain took over the airplane at the departure airport, the auxiliary power unit (APU) had been out of service for five days. This meant that a ground power source was needed to start the engines before departure and that one engine had to be kept running during the stopover because there was no ground power unit available there. De-icing was prohibited by company regulations when one engine was running.

After de-icing, the first flight started the day’s rotation with a 13-minute delay. The decision to leave had been taken because an improvement in the weather was forecast. Finally, the flight arrived at the second airport 20 minutes late. There was a conflict between the captain and the local manager over excess weight due to 10 extra passengers to be boarded.

What is your attitude toward this additional constraint?

The resulting consequence is the need to unload fuel to avoid exceeding the maximum take-off weight (MTOW). This created additional delays, and the cabin crew informed the captain and the first officer of numerous concerns expressed by the passengers about their connecting flights at the final destination. The pilots clearly expressed their frustration. The airplane landed at the return-leg airport with an hour’s delay in snow showers. Passengers were disembarking and boarding while the airplane was being refuelled with one engine running. The fire service was not there.

Do you continue the refuelling?

Fire equipment arrived after the start of refuelling, which did not please the captain, who was well known for his caution and respect for standard operating procedures (SOPs). As refuelling continued, the captain had what witnesses inside the terminal described as an “animated” telephone conversation with airline dispatchers about the weather conditions, the number of passengers and alternate airports. He then returned to the airplane increasingly irritated and showing clear signs of frustration.

Back on board, without any external preflight inspection, the captain asked the ramp agent if de-icing equipment was available. He was told that the airplane could be de-iced before departure.

Would you proceed with de-icing?

The captain did not formally request de-icing, and the ground agent did not insist on it. The airplane left the apron and taxied to the runway covered with 0.50 in (1.27 cm) of wet snow. An additional delay occurred due to priority given to a landing airplane.

More than 70 minutes late, the airplane started to roll on a contaminated runway with the front half of the wings covered with ice, as noted by passengers and cabin crew.

After a longer than usual roll, the captain, the pilot flying, initiated rotation. After some slight buffeting, the airplane touched back down on the runway. Less than 325 ft (99 m) from the end of the runway, the captain initiated a second rotation. The airplane crossed the threshold at about 15 ft, struck treetops and crashed 2,950 ft (899 m) past the threshold and started burning. Many passengers and several crewmembers, including the captain and first officer were killed.

The official investigation report emphasized a double message: Nothing can replace a good flight crew, but even the best trained and competent crew cannot compensate for the inherent faults in a complex system such as air transport.

It is clear that the flight crew did not fulfil its role as the last line of defence in the system. But the pilots were not alone in this respect; almost all stakeholders at all levels of the system, through their actions or lack of action, contributed to denying the crew the means to mitigate the consequences of its own actions.

De-icing was not requested. This was the biggest risk taken by the crew. The captain was known for his caution and respect for SOPs. He de-iced the airplane prior to taking off at the beginning of the flight leg. He walked to the terminal during refuelling in shirtsleeves in the snow; it was impossible for him not to have noticed the weather conditions. The captain did not deliberately take the wrong decision; the explanation for the mistake is to be found in the overall context and the associated constraints.

From all these events, the following contributing factors can be identified:

Furthermore, the accident investigation pointed out that inadequate organizational processes and latent organizational faults were the root cause of most of the risky behavior exhibited by the flight crew.

Deregulation policy during the 1980s had significantly increased workload at the same time staffing was cut to comply with budget measures.

The parent airline was the majority shareholder in the operator. But the commission found that the parent decided to stay away from any involvement in the subsidiary airline’s operations.

The accident report said that the captain was entirely responsible for the decision to land and take off at the refueling airport. However, it also said that the entire system contributed to putting him in a situation where he did not have all the information and tools necessary for correct decision making.

Prevention Strategies and Lines of Defense

The most important consequence of the accident and the subsequent investigation was clarifying that air transport should be considered as a whole system. After this accident, the stakeholders in the system were aware that they all contribute to the overall safety of the system.

Finding scapegoats is easy. Trying to prevent a tragedy such as this one, with its 24 victims, is harder and requires deeper analysis. Such an analysis would require:

From a human factors point of view, several prevention strategies are summarized below: 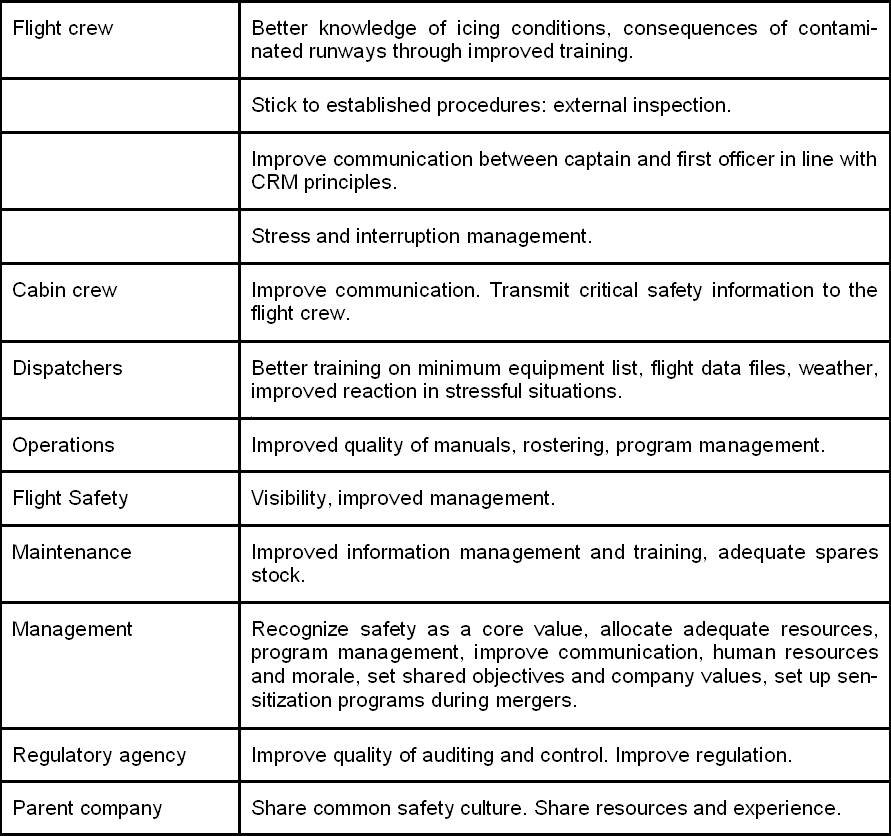 This situational example describes an accident caused by failure to conduct deicing operations. But contributing factors, as pointed out by the accident investigation commission, include latent organizational failures by the operator, its parent company and the regulatory authority. Understanding the complete picture underlying this accident can help all involved (flight crew, cabin crew, maintenance, training, company management and regulatory bodies) from falling into the same traps.

Among the following key points are:

The following briefing notes provide expanded information to complement the above overview: