A Deep Stall, sometimes referred to as a Super Stall, is a particularly dangerous form of stall that results in a substantial reduction or loss of elevator authority making normal stall recovery actions ineffective. In many cases, an aircraft in a Deep Stall might be unrecoverable. This phenomenon affects certain aircraft designs, most notably those with a T-tail configuration.

As the angle of attack of any aerofoil section is increased, the lift will also increase up to a point known as the critical angle. At this angle of attack (typically 15° to 20° for most aerofoil sections) the airflow separates from the upper surface of the wing and this condition is known as a stall. At the stall, lift is significantly reduced, drag is significantly increased and the airflow across, and behind, the wing becomes turbulent.

In an aircraft with a T-tail, the turbulent air in the wake of a stalled mainplane can affect the horizontal stabilizer, substantially reducing the effectiveness of the elevators and potentially negating the ability to recover from the stall by using pitch controls to reduce the mainplane angle of attack. 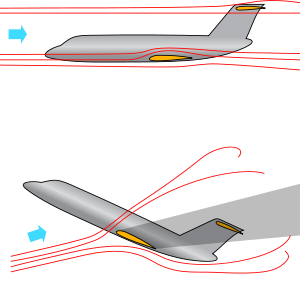 Deep Stall in a T-tail Aircraft

In the diagram above, the upper aircraft is in normal flight. The lower aircraft is in a stalled condition with a mainplane angle of attack in excess of the critical angle of attack. In the circumstance depicted in the diagram, the angle of attack is such horizontal stabilizers/elevators are in the turbulent airflow aft of the mainplane. This will substantially reduce the effectiveness of the horizontal stabilizer and elevators (and will also result in greatly reduced rudder authority)

Where the aircraft design includes gas turbine engines mounted on the fuselage either side of the tail, the same turbulent airflow affecting the tail surfaces can also affect the engines causing engine stall and surge, further increasing the danger of allowing such an aircraft to enter this Deep Stall condition.

Aircraft with a T-tail design are often configured with a Stick Pusher system to help prevent the mainplane angle of attack from reaching a value that could result in a Deep Stall.