A region of low pressure at the surface. The pressure gradually rises as you move away from the centre. 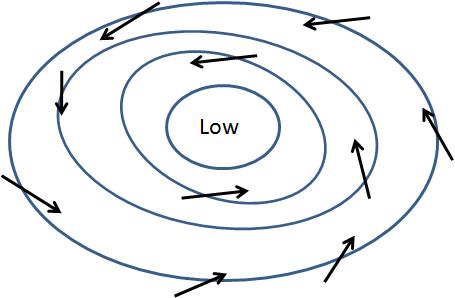 Air in the upper Troposphere can be caused to change direction and speed, sometimes leaving a gap or void behind it which is filled by air rising up from the surface. The outflow of air from an area is known as "Divergence", while the inflow of air to the area of low pressure is called "Convergence".

Air flows from high pressure to low pressure and, because of the rotation of the earth (coriolis effect), the strength and direction of the air flow depends on the pressure gradient, latitude, and hemisphere:

Formation of a Depression 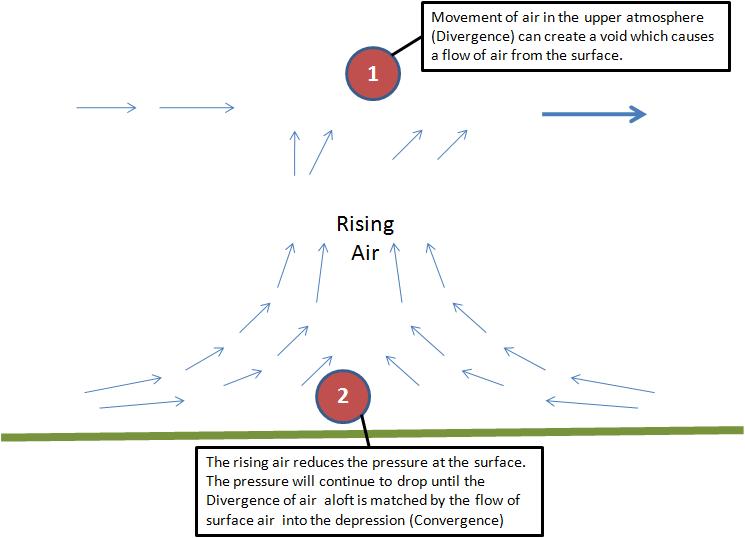 A depression can also be formed as a result of surface heating, interaction between air masses, or the movement of an air mass over a mountain range.

The boundary between two air masses is often distorted by warmer air bulging into the colder air, with the bulge moving along like a wave. The leading edge of the wave is known as a "warm front" while the trailing edge is called a "cold front". The cold front usually moves across the surface faster than the warm front. The pressure near the top of the wave falls sharply and a depression forms. 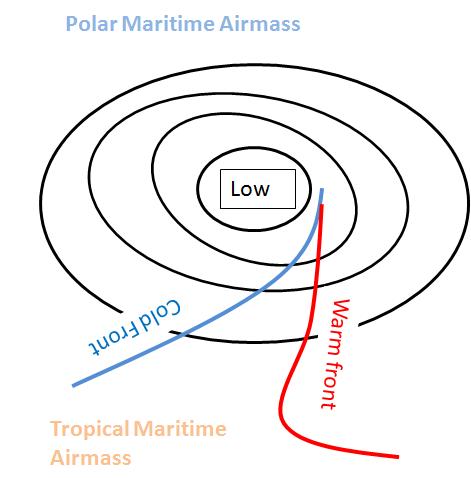 On a hot summer day, the land can heat up to such an extent that a large mass of air begins to rise. Where the heating is over an extended period, particularly over a continental landmass, this can lead to the general rising of air leading to the convergence of moist warm air from surrounding seas bringing continuous heavy rains that may last for several months (Monsoon).

If the movement of an air mass is impeded by a mountain range, the reduction in airflow may cause a drop in pressure on the leeward slope causing the formation of a localised depression.

Depending on the pressure gradient, strong winds may be experienced. The rising air will form into Nimbostratus cloud with steady continuous rain and poor visibility. Instability may lead to the development of cumulonimbus clouds accompanied by heavy rain and the threat of icing.