The term Diablo winds refers to winds that flow from the east or northeast to the west up and over the Diablo Range (part of the California Coast Ranges in the U.S.) and down into the East Bay region of the San Francisco Bay area. They are similar to the famed Santa Anna winds of southern California. Wind speeds can exceed 60 mph. 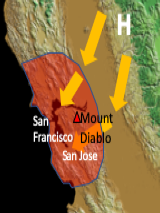 The Diablo wind is created by the combination of strong inland high pressure at the surface typically over Nevada, strongly sinking air aloft due to upper-level convergence, and lower pressure off the California coast.

The air descending from aloft as well as sinking on the leeside of the Coast Ranges compresses due to the higher pressure at lower levels as it sinks to sea level where it warms as much as 11 °C, and loses relative humidity.

As the air sinks, it heats up by compression and its relative humidity drops due to the increased temperature. This warming is in addition to, and usually greater than, any contact heating that occurs as the air stream crosses the Central Valley and the Diablo Valley. This is the reverse of the normal summertime weather pattern in which an area of low pressure (called the California Thermal Low) rather than high pressure lies east of the Bay Area, drawing in cooler, more humid air from the ocean. The dry offshore wind, already strong because of the offshore pressure gradient, can become quite strong with gusts reaching speeds of 60 miles per hour (97 km/h) or higher, particularly along and in the lee of the ridges of the Coast Range.

The strong dry winds are especially dangerous with respect to wildfires as they can drive the fire rapidly to the west.

While the Diablo wind pattern occurs in both the spring and fall, it is most dangerous in the fall, when vegetation is at its driest toward the end of the summer dry season. California's predominantly Mediterranean climate has an extended dry period from May through October.