The controlled emergency landing of an aircraft on water.

A Difficult and Demanding Manoeuvre 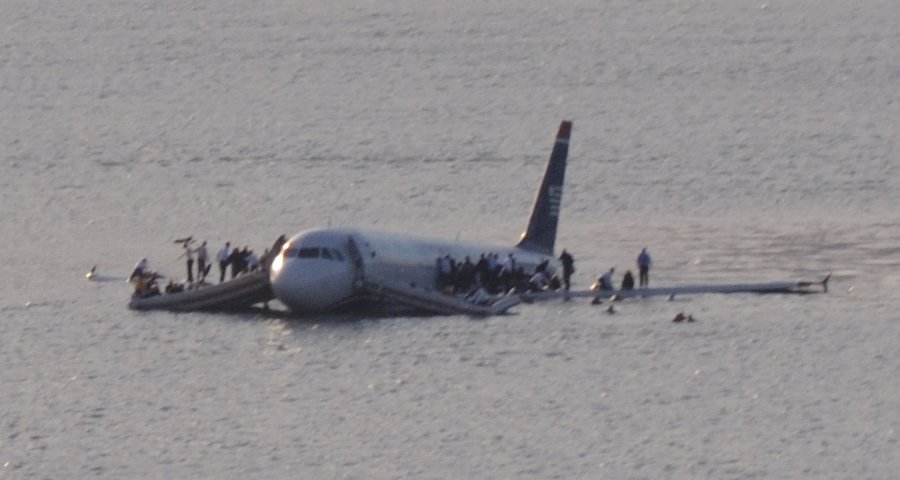 US Airways Airbus A320 after ditching in the Hudson River, New York, USA on 15 January 2009

Ditching an aircraft into the sea, a river, or a lake, is a manoeuvre that, by definition, cannot be practiced and may be extremely hazardous. It is only contemplated when no other realistic option remains in an emergency. For fixed wing this may be because there is a growing fire onboard and/or it is not possible to reach a runway, or succeed with an approach to those runways within reach and the situation does not favour or even allow an attempt at an off-airport forced landing.

Even if the Sea State is slight, there is a strong possibility that a small aircraft will fail to remain upright and/or will sink rapidly and that a large fixed wing aircraft will suffer a loss of structural integrity on impact with the water surface. Limited available evidence suggests that such structural failure may be in the area of the centre fuselage and in the vicinity of the rear pressure bulkhead. If the occupants survive the ditching then, even with the benefit of protective clothing and equipment, in cold waters they may succumb to cold shock or hypothermia before they are rescued.

A controlled ditching might be made in anticipation of a loss of control or its actual onset. In the case of most multi-engined fixed wing aircraft, this will be a consequence of the failure of more than 50% of the available engines because of:

Other potential causes of an impending loss of control which could prompt a decision to ditch include uncontrollable and developing fire or structural failure and, for rotary wing aircraft over water, indications of imminent power transmission failure or loss of rotor integrity for which the procedural response is 'Land Immediately'.

Considerations and Techniques for Ditching a Fixed Wing Aircraft

The following is a list of generally accepted considerations and techniques for ditching that should be applicable to virtually any fixed wing aircraft type.

In the time available:

Once the aircraft has come to a complete stop, initiate the evacuation. The expected attitude of the aircraft in the water is almost always "nose up" so that the rear doors will not be usable for evacuation. Ensure all available survival gear is taken from the aircraft. Whenever possible, link all of the rafts together to maximize the visual target for the search parties.

Many aspects of post ditching survival are covered by the actions described above. Training and procedure may get your aircraft down into the water safely; leadership and strong mental attitude is needed to get out. The environment the survivors will now find themselves in will certainly be unfamiliar and unexpected and may be extremely hostile. Continued survival will depend on the water and air temperature, the wind and sea state, the physical and mental condition of individuals, the clothing worn and the availability of useful survival equipment amongst many other things. Swift location and rescue may well be of crucial importance. The references in 'Further Reading' below offer considerable discussion of the issues involved in survival following a ditching.

Training for Ditching and the Aftermath

Full Flight Simulator practice of ditching by pilots is impossible because there is no data with which to meaningfully program the simulator. Training is limited to scenario-based discussion of both the process of ditching and, for all aircrew, the emergency evacuation of an aircraft which has landed on water.

NOTE The Report of this Investigation contains considerable discussion about both the operational and airworthiness issues posed by the ditching of a large transport aircraft.