There are four basic hand signals (see illustrations below) that ground rescue and fire-fighting personnel are expected to understand and use clearly during emergencies to communicate with flight deck and/or cabin crew, and which all crew members should understand the meaning. As well as just hands, these signals can be made with a variety of paddles, batons and wands – both lit and unlit.

Hand signals are used, on aerodromes, as either primary or back-up communication for many different tasks and between a wide-range of personnel. These include ground marshallers giving steering directions to pilots; pilots indicating the application of handbrakes to ground crew; cabin crew communicating with step drivers; and de-icing operatives giving pilots the “all clear”.

To avoid misinterpretation it is important that hand signals are unambiguous, clearly and precisely delivered, and universally understood. To help achieve this, Appendix 1 to ICAO Annex 2 Rules of the Air includes descriptions and pictures of the main marshalling, and emergency, hand signals; these have been reproduced[1]by many National Authorities and trade organisations.

The ICAO list is not comprehensive, for example, it does not include hand signals to relay typical messages during de-icing and anti-icing operations. Commercial pilots operating from some military facilities may also be unfamiliar with some hand signals used in these places[2].

It is important that pilots, as an absolute minimum, should clearly understand the following emergency hand signals that may be issued by rescue and fire-fighting personnel, and also by marshallers and ground crew when indicating the location of a fire (e.g. engine, APU, brakes). In an emergency it is always preferable, but not always possible or expedient, to communicate using voice via radio or interphone.

At night lit wands will improve the chances of the signal being seen, however, some degree of ambient light may be necessary for the message to be understood.

ICAO describes this signal as moving the right-hand wand in a "fanning" motion from shoulder to knee, while at the same time pointing with the left-hand wand to area of fire (which might be an engine, APU, brake, or elsewhere). IFALPA also indicates that the signal could be made with a rapid horizontal figure-of-eight motion at waist level with either arm, pointing at the source of fire with the other arm[3]. 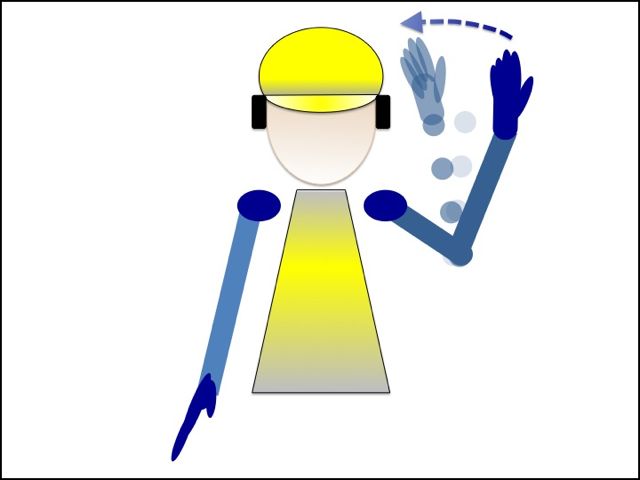 Signalling that an Evacuation is Recommended

Used when an evacuation is recommended by the person making the signal. The signalling arm is extended horizontally from the body, with the hand upraised at eye level and the palm turned towards the signaller, away from the pilot. Then a beckoning gesture is made angling the arm backward from the elbow. The non-beckoning arm is held against the body. 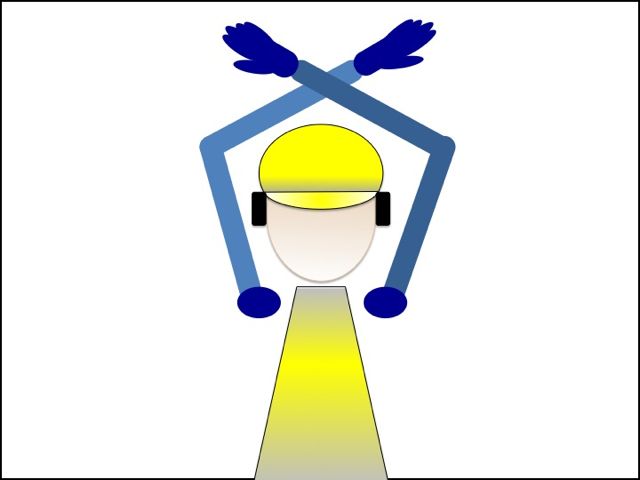 Signalling a Recommendation that Activity, or Progress is Stopped (including evacuation if in progress)

Used to get pilots to immediately stop any activity that is in progress; this could be aircraft movement or even evacuation, if an evacuation is already in progress. Crossed arms, at the wrists, above and in front of the head. 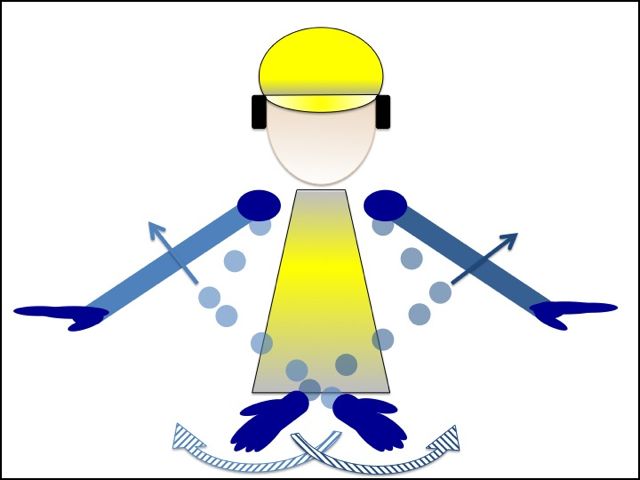 Signalling that the Emergency is Contained

Used when there is no outside evidence of dangerous conditions or "All Clear". Start with arms extended outward and down at a 45 degree angle. Then move arms inward below waistline simultaneously until wrists crossed, then extend outward to starting position.

It is possibly to be confused between which emergency signal is being issued, especially in conditions of poor light and visibility and when the signals are conducted imprecisely or carelessly. In most cases the context of the event should help with clarity; however, for example, the signal to indicate a fire is not dissimilar from both the engine start and aircraft turn signals.