Wake vortex encounter (WVE) is often recognised as a safety issue for aircraft on initial climb and final approach. However, wake turbulence can also be encountered en route, where the risk of injury to occupants will be increased since seat belt signs will often be off and/or cabin service in progress. This article discusses the safety issues related to en-route wake vortex hazard.

What is Wake Vortex?

The origin of counter-rotating wing tip vortices is a direct and automatic consequence of the generation of lift by a wing. Lift is generated by the creation of a pressure differential over the wing surface. The lowest pressure occurs over the upper wing surface and the highest pressure under the wing. This pressure differential triggers the roll up of the airflow aft of the wing resulting in swirling air masses trailing downstream of the wing tips. After the roll up is completed, the wake consists of two counter-rotating cylindrical vortices. 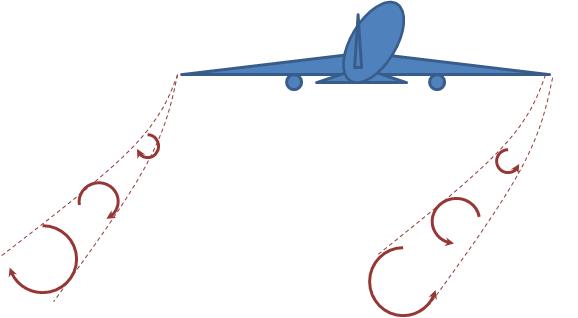 The strength of the vortex is governed by the weight, speed, and shape of the wing of the generating aircraft. Once formed, vortices descend until they decay. Under certain meteorological conditions such as stable stratified atmosphere and temperature inversion, the wake vortices have reduced descent speed and decay faster. The longest-lived vortices are observed in non-turbulent and neutrally stratified environments.

The potential for significant wake vortex turbulence in the cruise is greatest where an aircraft is following a similar track to another heavier one ahead that is either at the same level or the next available level above. The extent of the ‘in trail’ case can be extrapolated to climb and descent but in all cases, the important thing to note is that, especially for following aircraft two categories or more below that of the leading aircraft, significant wake turbulence can be encountered at greater separation than is required in en route airspace where radar control service is provided. In the case of crossing tracks, it has been found that the time interval necessary to avoid creating a wake vortex hazard is 3 minutes.

Sudden uncommanded roll moments may occur which, in extreme cases, can be beyond the absolute power of the flying controls or the prevailing response of the flight crew to counteract. The high rate of roll may cause uncommanded disconnection of the autopilot and transient or terminal loss of control. En route in-trail uncommanded roll can be similarly caused to smaller aircraft by the effect of larger ones, which may be ahead at a higher level. Note that if the generating aircraft is climbing or descending rapidly (greater than 1000 fpm) then a significant wake vortex may persist across several flight levels. If the generator aircraft is descending, this means that a WVE can occur above the position of the generator aircraft at the time of the encounter.

A cross-track encounter en route is likely to lead to only one or two sharp 'jolts' as the vortices are crossed. In either en route case, injuries to unsecured occupants can result, both passengers and cabin crew. Since most operators ensure that passengers are secured during intermediate and final approach and during initial climb after take off, it is cabin crew who will be most at risk of injury if they are not yet secured during the later stages of an approach.

ATC traffic separation standards in controlled airspace will not necessarily prevent significant encounters with wake turbulence and a greater risk of injury exists because passengers and/or Cabin Crew will often not be secured in their seats. However, it is unlikely that any loss of control will be more than very brief and easy to recover from if at least minimum ATC separation standards are maintained.

The only available direct defence against occupant injuries is for the flight crew to maintain situational awareness by monitoring other traffic in the vicinity, listening out on RTF and by use of the TCAS display; if similar track climbing or, when level, one-level-above traffic is observed up to 20 nm ahead and known to be a significantly heavier aircraft type, then the seat belt sign can be switched on and an appropriate Cabin announcement made. At the discretion of the aircraft commander, cabin crew may also be advised to temporarily cease any cabin service and secure themselves and their equipment.

Flying a parallel offset (e.g. a few miles left or right of the flight planned route) can be used to avoid prolonged periods of exposure to wake turbulence. This allows for better comfort and continued in-flight service but in order to be effective an early enough warning is necessary. This can be done either by performing the ACAS procedure described above or by being informed by the air traffic controller of a possible encounter.

ATC awareness of the persistence of wake turbulence at en route altitudes, beyond required traffic separation minima, is sometimes poor. 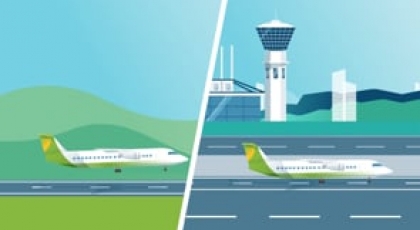 On 28 May 2006, a Vueling Airbus A320 encountered sudden significant turbulence at FL325 and, during a temporary loss of control, was forced down to FL310 before recovery was achieved. Seven occupants sustained minor injuries and there was some internal damage caused by an unrestrained cabin service cart. The origin of the disturbance was found to have been wake vortices from an Airbus A340-300 which was 10nm ahead and 500 feet above on the same airway but the Investigation found that the crew response had been inappropriate and could have served to exacerbate the effects of the external disturbance.

On 29 April 2014, an Embraer E170 being operated in accordance with ATC instructions in smooth air conditions suddenly encountered an unexpected short period of severe turbulence which led both members of the cabin crew to fall and sustain injury, one a serious injury. The Investigation concluded that the turbulence encountered, which had occurred soon after the aircraft began descent from FL110, was due to an encounter with the descending wake vortex of a preceding Airbus A340 which had been approximately 10 nm and 2 minutes ahead on the same track and had remained level at FL 110.

On 26 September 2009, a Piper PA28-140 flown by an experienced pilot was about to touch down after a day VMC approach about a mile behind an S76 helicopter which was also categorised as 'Light' for Wake Vortex purposes rolled uncontrollably to the right in the flare and struck the ground inverted seriously injuring the pilot. The Investigation noted existing informal National Regulatory Authority guidance material already suggested that light aircraft pilots might treat 'Light' helicopters as one category higher when on approach and recommended that this advice be more widely promulgated.

On 10 January 2008, an Air Canada Airbus A319 en route over the north western USA encountered unexpected sudden wake vortex turbulence from an in trail Boeing 747-400 nearly 11nm ahead to which the pilots who then responded with potentially hazardous flight control inputs which led to reversion to Alternate Control Law and aggravated the external /disturbance to the aircraft trajectory with roll up to 55° and an unintended descent of 1400 feet which with cabin service in progress and sea belt signs off led to cabin service carts hitting the cabin ceiling and several passenger injuries, some serious.

On 27 June 2000 an Airbus A300-600 being operated by American Airlines on a scheduled passenger service from London Heathrow to New York JFK was being flown manually in the day VMC climb and approaching FL220 when a loud bang was heard and there was a simultaneous abrupt disturbance to the flight path. The event appeared to the flight crew to have been a disturbance in yaw with no obvious concurrent lateral motion. Although following the disturbance, the aircraft appeared to behave normally, the aircraft commander decided to return to London Heathrow rather than commence a transatlantic flight following what was suspected to have been an un-commanded flight control input. An uneventful return was made followed by an overweight landing 50 minutes after take off.

On 15 December 1993, the crew of an IAI Westwind on a domestic passenger charter flight failed to leave sufficient separation between their aircraft and the Boeing 757 ahead on finals in night VMC and lost control or their aircraft which crashed killing all occupants and destroying the aircraft in the impact and post-crash fire.

On 2 September 1999, a United Airlines Boeing Boeing 737-300 in the cruise at FL240, experienced severe turbulence due to an encounter with the wake vortex from a preceding MD11 on a similar track which had climbed through the level of the B737 with minimum lateral separation, 1.5 minutes earlier.

On 5 September 1996, a Boeing 737-500 operated by British Midland, encountered severe wake turbulence whilst in the hold over London. The wake was attributed to a B767 some 6 nm ahead.

On Monday 3 March 1997 at 1014 hours, privately owned and operated Cessna 185 encountered wake turbulence from previous departing aircraft, the pilot lost control of the aircraft at a height from which recovery was not possible and the aircraft descended to the ground.

On 12 November 2001, an Airbus A300-600 encountered mild wake turbulence as it climbed after departing New York JFK to which the First Officer responded with a series of unnecessary and excessive control inputs involving cyclic full-deflection rudder pedal inputs. Within less than 7 seconds, these caused detachment of the vertical stabiliser from the aircraft resulting in loss of control and ground impact with a post crash fire. The Investigation concluded that elements of the company pilot training process and the design of the A300-600 rudder system had contributed to this excessive use of the rudder and its consequences.