The flight crew’s inability to assess or to manage the aircraft’s energy condition during approach is often cited as a cause of unstabilised approaches. Crews should appreciate that fatigue will increase the likelihood that they will have difficulty in detecting that an approach is going outside normal parameters.

Either a deficit of energy (low and/or slow) or an excess of energy (high/fast) may result in an approach-and-landing incident or accident involving one of the following:

These safety occurrences can result from one or more of the following factors:

These accidents involved incorrect management of aircraft energy, resulting in an excess or deficit of energy, as follows:

Aircraft energy condition is a function of the following primary flight parameters:

One of the primary tasks of the flight crew is to control and to monitor aircraft energy condition (using all available references) to:

Autopilot modes, flight director modes, auto throttle modes, aircraft instruments, warnings and protections are designed to relieve or assist in this task so it is essential that flight crews have a thorough understanding of these modes, their potential and limitations.

Going Down and Slowing Down

It is important to understand your aircraft. Some modern airliners are so aerodynamically ‘clean’ (low drag) that it may not be so much a case of ‘going down and slowing down’ as ‘going down or slowing down.’

A study by the U.S. National Transportation Safety Board revealed that maintaining a high airspeed to the outer marker (OM) may prevent capture of the glideslope by the autopilot and may prevent aircraft stabilisation at the defined stabilisation height.

Nonetheless, ATC instructions to maintain a high airspeed to the OM (160 knots to 200 knots, typically) are common at high-density airports, to increase the landing rate. The study concluded that no airspeed restriction should be imposed by air traffic control (ATC) when within 3 to 4 nm of the OM, especially in instrument meteorological conditions (IMC).

Energy management is the responsibility of the pilot in command (PIC) who must take into consideration the aircraft’s inertia, limitations and crew ability in the prevailing environmental conditions. Wind can play an important part. There can be a big difference in outcome between maintaining 160 knots to the marker with a 30 knots headwind and with a 20 knots tailwind. When ATC instructions are at variance with the PIC’s responsibilities and cannot be complied with, this must be communicated to ATC immediately.

Although deceleration characteristics vary among aircraft types and their gross weights, the following typical values can be used:

In some aircraft, speed brakes may allow a faster deceleration (but often the use of speed brakes is not recommended or not permitted below 1,000 feet above airport elevation or with landing flaps extended). However, the deceleration effect of all drag devices (spoilers, flaps and landing gear) becomes less effective as speed reduces.

Typically, slats should be extended not later than three nm from the final approach fix (FAF). In all cases, aircraft should be configured for the approach being flown in accordance with the aircraft’s Flight Manual/Flight Training Manual/Operations Manual.

The diagram below shows aircraft deceleration capability and the maximum airspeed at the OM based on a conservative deceleration rate of 10 knots per nm on a three-degree glide path. 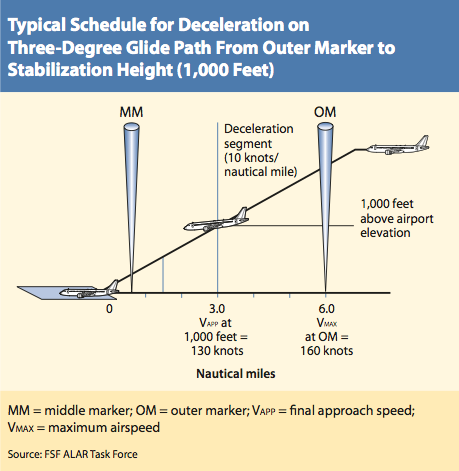 To be stabilized at 130 knots at 1,000 feet above airport elevation, the maximum airspeed that can be accepted and can be maintained down to the OM is, therefore:

Whenever a flight crew is requested to maintain a high airspeed down to the outer marker (OM), a quick computation such as the one shown above can help assess the ATC request.

Again, an understanding of the prevailing wind is important; a crosswind on the runway may be a substantial tailwind above a thousand feet.

Back Side of the Power Curve

During an unstabilized approach, airspeed or the thrust setting often deviates from recommended criteria as follows:

The diagram below shows the thrust-required-to-fly curve (also called the power curve). 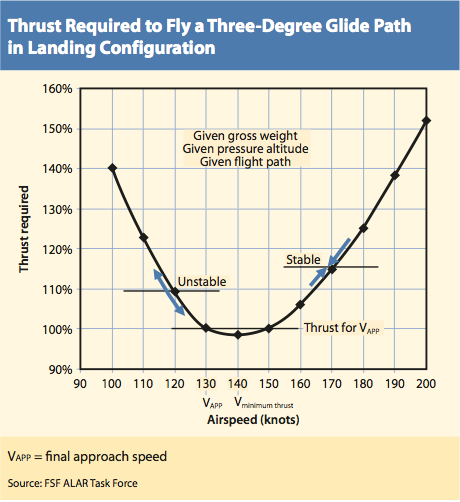 The difference between the available thrust and the thrust required to fly represents the climb or acceleration capability.

The right segment of the power curve is the normal zone of operation; the thrust balance (i.e., the balance between thrust required to fly and available thrust) is stable.

Thus, at a given thrust level, any tendency to accelerate increases the thrust required to fly and, hence, returns the aircraft to the initial airspeed.

The final approach speed usually is slightly on the back side of the power curve, while the minimum thrust speed is 1.35 times VSO (stall speed in landing configuration) to 1.4 times VSO.

Runway overruns, runway overshoots, collisions with terrain and obstructions often are the consequences of decision to land after a go-around is initiated.

The only Go Around you will ever really regret is the one that you did not do when you should have done.