Light Twin Engine Aircraft - A twin engine aircraft under 5700kg MTWO. For the purposes of this article, twin engine centre-line thrust aircraft are not considered

Vmcg - Minimum control speed on the ground - the minimum airspeed at which the aircraft is directionally controllable during acceleration along the runway with one engine inoperative, takeoff power on the operative engine(s), and with nose wheel steering (if installed) assumed inoperative.

Vmca - Airborne minimum control speed - this is the minimum airspeed at which directional control can be maintained under the following conditions: maximum gross weight, center of gravity [C of G] at the maximum aft position, sea level, flaps set to the takeoff position, landing gear retracted, operating engine developing maximum power, critical engine failed and windmilling, a maximum of 5 degrees of bank towards the good engine.

Vyse - Best rate of climb speed with a single operating engine in a light, twin-engine aircraft - the speed that provides the most altitude gain per unit of time following an engine failure.

Conventional light twins have many significant advantages over their single-engine counterparts. One of the most obvious of these is that should you be unlucky enough to experience a major engine malfunction, the other engine should carry you safely to the nearest suitable airfield. This can be particularly significant when flying over inhospitable terrain or over water - particularly at night or in IMC conditions. However, it is also a well documented fact that should you be unlucky enough to lose an engine in a light twin during the take-off, the margins for error, especially when at higher weights, are very small. Identification of the failed engine needs to be both rapid and accurate and the propeller must be feathered whilst simultaneously keeping the airspeed at the best single engine climb speed, often referred to as “blue line” speed because of such a line often seen on analogue ASIs. Unless the landing gear is fixed, promptly raising can be vital. Then there are 'housekeeping' matters such as retracting the flaps at the appropriate time and making adjustments to the engine controls of the operating engine. If these tasks have been performed correctly and in a timely manner, the reward will be at least no loss of altitude and, in favourable circumstances, perhaps even a positive rate of climb. However, there is little room for error and, all too often, a score of less than 100% leads to an accident.

If a multi-engine aircraft suffers engine failure when airborne, there are two immediate aerodynamic effects. The initial effect is the yawing that occurs due to the asymmetry of the thrust line. The size of this initial yawing moment depends upon the engine thrust and the distance between the thrust line and the aircraft centre of gravity. The yawing moment is also affected initially by the rate of thrust decay of the ‘dead’ engine and ultimately by its drag. In addition, the yaw is aggravated by the drag effect of the windmilling propeller. The total moment can be very large, particularly when the airplane is at high power and low speed.

As well as the aerodynamic consequences of the failure, the performance penalty is very significant. While the failure of an engine represents a 50% loss of available power, it can result in as much as an 80% loss of performance.

Obviously, if aircraft engines were absolutely reliable, engine failure during takeoff would never occur. Manufacturers have made great improvements over the years in the reliability of their products and turbine engines have demonstrated much better reliability than piston engines. However, as any engine is a mechanical device, it is unlikely that the potential for engine failure will ever be completely eliminated. Pilots can reduce the risk of failure by ensuring that the engines are maintained to the manufacturer’s recommendations, that during their preflight inspection all fluids are adequate and that there are no obvious leaks or damage, that the fuel supply is free from water or other contamination and, during the run-up, that the engine performs within the published limits.

Even with all preflight recommendations met, there is still a potential for a failure during takeoff and initial climb. The other critical defence, therefore, is a thorough understanding of the aerodynamics of a failure and the appropriate actions that must be taken should it occur.

Professional pilots operating heavier aircraft, are exposed to engine failure training using a full motion simulator. There is no such realistic training device available to the pilot of most light twin propeller driven aircraft so that asymmetric flight training must take place in the aircraft. The inherent risk of simulating a failure on the runway or in the early stages of climb by retarding a throttle is obvious. For that reason, most airborne training is done well above the ground at speeds that intentionally exceed stall speed and Vmca by a significant safety margin. This can give the trainee pilot a false perception of the true characteristics of an engine failure on takeoff. Once multi-engine qualified, many private pilots do not undertake single engine flight practice to maintain their skills.

SKYbrary does not advocate simulating the loss of an engine during the takeoff roll or during initial climb as a means to enhance pilot proficiency. The inherent risks of doing so far outweigh the benefits of the exercise. There is considerable benefit, however, in periodically seeking the services of a qualified instructor for refresher training in asymmetric flight. A pilot should also thoroughly understand the aerodynamic issues which surround asymmetric flight and know, without hesitation, the actions that must be taken in the event of a failure. He should develop generic memory drills for engine failures on takeoff and mentally review them before every departure…

"In the event of an engine failure prior to lift off, I will close both throttles, maintain the center line with rudder and bring the aircraft to a stop using full brakes"

"In the event of an engine failure immediately after takeoff, I will counter the yaw with rudder and use aileron to raise the dead engine. I will raise the undercarriage and lower the nose to maintain airspeed. I will then positively identify the failure and feather the failed engine..." 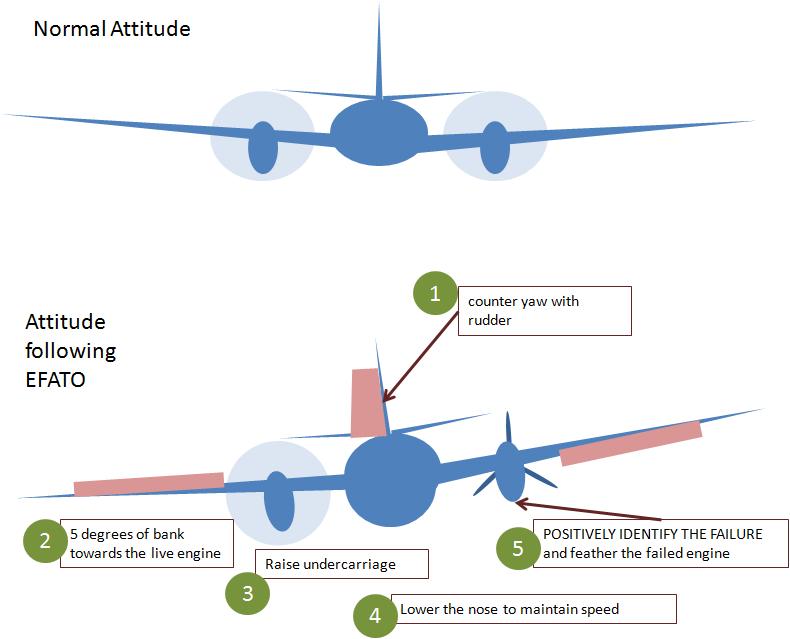 Engine Failure After Take Off

With this sort of review, the pilot has mentally prepared themselves for a failure and is in the best possible position to successfully deal with that eventuality.

On 7 October 2012, a Britten-Norman BN2 Islander pilot lost control of their aircraft shortly after take off from Antigua when the right engine stopped due to the presence of water in the corresponding fuel tank. The Investigation found that heavy rain whilst the aircraft had been parked prior to flight had resulted in water entering the tank because of anomalies in the fuel tank filler neck and cap. The reason why the pilot had been unable to keep control of the aircraft was not explained but evidence of his performance under training and test suggested weakness in aircraft control.

On 3rd September 1999, shortly after take-off from Glasgow UK, a Cessna 404 experienced an engine failure which was mishandled, leading to loss of control, and the aircraft was destroyed by a post-crash fire.