An Engineered Materials Arresting System uses a specially installed surface which quickly stops any aircraft that moves onto it. EMAS may be installed at the end of some runways to reduce the extent, and associated risks, of any overrun off the end of the runway compared to the equivalent soft ground distance. As such it may be an alternative to a Runway End Safety Area (RESA) where the topography precludes the full recommended length of a RESA or it may be used in addition to a full length RESA where precipitous terrain immediately follows the end of the RESA. Operationally, it may also be installed to prevent an overrun affecting other runways and therefore increasing the capacity consequences of an overrun as in the case of the Madrid installation - see below.

There are currently no ICAO SARPs for EMAS.

In the absence of any international standards, early attempts at installing arrester beds of gravel at the end of runways proved to create a fire hazard comparable to that of an extended overrun. This was because the hard material thrown up from the gravel bed tended to puncture wing fuel tanks and start a fire, which was then very difficult to extinguish because leaking fuel seeped into the gravel bed from where it continued to feed the fire from below.

The Development of EMAS in the USA 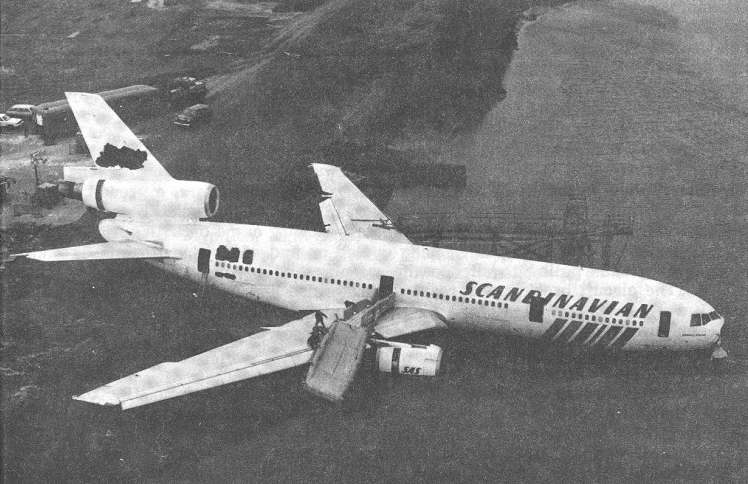 It was an overrun by an SAS DC10-30 following a late touchdown on runway 04R at New York JFK in February 1984 which was the catalyst for the development of EMAS. The extent of the overrun led to both passenger injuries and substantial aircraft damage. The FAA and the United States Air Force (USAF) agreed to determine the feasibility of, and develop criteria for, the design of soft-ground arresting systems on 21 December 1984 and, in 1989, the FAA initiated an experimental program with the U.S. Naval Air Engineering Center to conduct experiments on soft-ground materials. The purpose of these experiments was to verify the theoretical calculations of stopping distances. Tests were conducted on phenolic foam and cellular cement with an FAA Boeing 727 in the summer of 1990. The FAA Technical Center then conducted two successful full-scale ‘arrestments’ using the same instrumented Boeing 727 in the summer of 1993 using a phenolic foam bed 207 metres long, 15 metres wide and 18 inches deep. The most significant early overall review of the subject was the 1993 FAA Report “Soft Ground Arresting Systems for Airports.”

Between 1994 and 1996, the FAA and the Operator of New York JFK developed and installed a prototype arrestor bed built with pre-cast cellular cement blocks for runway 04R at New York/John F Kennedy International Airport. As early as 1998, the FAA issued the first generic specification for EMAS design, installation and maintenance. Since then it has encouraged the first (US) manufacturer of a viable EMAS system, Zodiac Aerospace, in the development of its “EMASMAX” ® product for more widespread civil use. More recently, Runway Safe has developed an alternative technology EMAS which is also compliant with the FAA regulations.

An EMAS installed in accordance with the FAA specification is stated to provide a level of safety that is equivalent to an FAA 305m Runway Safety Area (RSA) - which corresponds to the ICAO Recommended Practice for RESA plus the required Runway Strip detailed in Annex 14. The total extent of the overrun ‘system’ which incorporates an EMAS bed can then be reduced subject to FAA approval to 180m - exactly the same distance as the ICAO RESA Standard provides for - but to considerably more effect .

The current (2012) FAA Circular on the subject is AC 150/5220-22B Engineered Materials Arresting Systems (EMAS) for Aircraft Overruns which was issued in September 2012 and includes requirements for:

The requirements in respect of both jet blast and undershoot are largely met by the requirement for a “setback” zone between the runway end and the EMAS bed. The limiting factor is usually the jet blast risk, but continued development of pavement surfaces which are resistant to jet blast has allowed the EMAS set back distances to be reduced, in some cases to as little as 7.5m.

EMAS outside the USA

A number of NAAs have recently introduced, or are actively preparing, generic guidance for the approval of EMAS based on the currently applicable FAA standards. These NAAs include those in Australia, the UK, Canada, France and Spain. The definition of the term ‘Engineered Materials’ adopted by the FAA - ‘high energy absorbing materials of selected strength which will reliably and predictably crush under the weight of an aircraft’- has been widely accepted outside the USA. In China, where considerable use of EMAS beyond the single airport equipped with a US-supplied installation is envisaged, the China Academy of Civil Aviation Science and Technology (CAST)has overseen the successful development of an indigenous alternative product which meets FAA standards and CAAC approval for its use is expected to be given during 2015.

The core application of EMAS has been seen as locations where the ground profile at the end of a runway is such that the consequences of a landing overrun, or one following a rejected take off initiated from high speed, are serious damage to, or the complete destruction, of an aircraft. More recently, it has been promoted as an option to avoid an overrun trajectory conflicting with the extended centreline of another runway. It has also been argued that it is not only an alternative to a longer RESA, where the criteria for the profile of the latter cannot be met, but is also an alternative which will ensure that high speed overruns will be stopped even where the full recommended RESA length may not be sufficient for an aircraft to stop within it.

Since the first EMAS were installed on runways 04R and 22L at New York JFK in 1996, there has been a steady increase in installations so that by the middle of 2018, systems had been installed at approximately 106 runway ends at 63 airports in the USA including Boston 15R and 04L, Chicago O’Hare 04R/22L and all four runways at Chicago Midway, with plans to install seven EMAS systems at six additional U.S. airports. The first installations outside the US were carried out on both ends of 02/20 at Jiuzhai-Huanglong (China) and later on 10 at Taipei Songshan (Taiwan) and on 33L and 33R at Madrid Barajas (Spain).

The presence of an EMAS should be included in the AIPs entry for the Airport concerned and the main commercial chart providers have now developed a standard depiction for an EMAS installation.

Currently (2019), more than 110 runway ends on more than 70 US airports are EMAS equipped. For a full list see FAA Fact Sheet - Engineering Material Arresting System (EMAS). Elsewhere, EMAS is installed at Jiuzhai-Huanglong, Peoples Republic of China; at Madrid Barajas, Spain; and at Taipei Songshan in Taiwan.

The design of the Zodiac Aerospace EMAS product is predicated on being able to cope with the overrun speeds that have occurred in the past and the aircraft sizes which may use particular runways. Each installation is adapted to the prevailing environmental circumstances and a maximum EMAS entry speed by aircraft type. It meets all the requirements of the applicable FAA guidance.

The Zodiac EMAS is a bed of cellular cement blocks encased in a protective cover positioned after a ‘setback distance’ which begins immediately after the end of the paved runway surface. The blocks crush reliably and predictably under the weight of an aircraft and thus facilitate a rapid but nevertheless gentle and consistent deceleration. Each lightweight block is secured to the EMAS base with hot asphalt and the seams between blocks are then taped at their upper surface to prevent water penetration. The depth of the EMAS bed gradually increases with increasing distance from the runway, typically from around 25cm up to 75cm.

An FAA-approved computer model of the wheel / compacted cellular cement interface is used to determine the required arrestor bed configuration according to aircraft weight and EMAS entry speed. The heaviest aircraft will usually be the ‘critical aircraft’ but, since landing gear configuration and tyre pressures are also relevant, this does not hold universally.

Each system is also designed to take account of runway length / width, elevation, and the length and slope of the available installation area. Performance usually takes account of aircraft types which have more than 500 movements per year and assumes that these aircraft will be operating at 100% of runway MTOM or 80% of runway MLW. Most installations to date have used a maximum 70 knots bed-entry speed.

Additional assumptions for all designs are that:

An EMAS bed may have a surface slope downwards and may have changes in that slope within the bed so that the quantity of any landfill used to create an adequate base level for the bed can be minimised. It can also accommodate projecting frangible lighting which needs to be sited within the bed area.

To date, EMAS installations have been designed to arrest multi crew transport aircraft and these systems do not work as effectively for smaller ones - those under 5700kg MTOM

The standard design life of a Zodiac Aerospace EMAS is 20 years. Routine inspection and maintenance is important but requirements are minimal. Restoration of a bed after overrun use may take a few days and cannot be completed in sub zero temperatures.

EMAS Use for Flight Crew

The only pilot guidance for an imminent EMAS encounter is to maintain the extended runway centreline and, once stopped, make no attempt to taxi or otherwise move the aircraft. Once the upper surface of an EMAS bed has been breached, loose material from the blocks will crush underfoot, so that access on foot to and egress from an aircraft in the bed is not impeded. 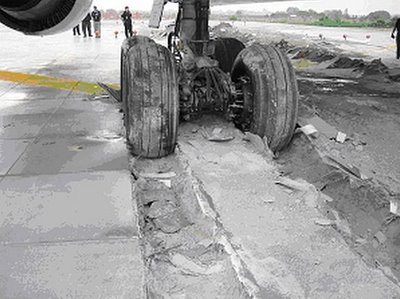 EMAS in use (Source: Zodiac Aerospace

A number of overruns in the USA have had less serious consequences than might have been the case due to the presence of an EMAS. As of December 2020, there have been 15 incidents at U.S. airports where EMAS has stopped overrunning aircraft. There were a total of 406 passengers and crew on those incident flights. Runway 04R at JFK has seen three EMAS-mitigated overruns in which the aircraft have been undamaged and the occupants uninjured including:

Other successful EMAS-mitigated overruns in the US have included: