This article outlines standards and recommended practices, as of early 2021, for aircraft pilots and air traffic controllers to attain one of three recognised levels of English language proficiency (ELP). In many cases, specific language proficiency is required to comply with licence qualifications.

ICAO set its first deadline — March 2008 — for ICAO Member States, planning for ELP standards to take effect at Level 4, Level 5 or Level 6 for all pilots flying international routes and all air traffic controllers serving international airports and routes. States unable to meet the first deadline were granted time to implement the acceptable language proficiency levels by March 2011. By 2013, ICAO reported that some Member States had serious difficulty and called on other nations to assist them.

Its Manual on the Implementation of ICAO Language Proficiency Requirements (Doc 9835), states: “Native speakers of English, too, have a fundamentally important role to play in the international efforts to increase communication safety.” 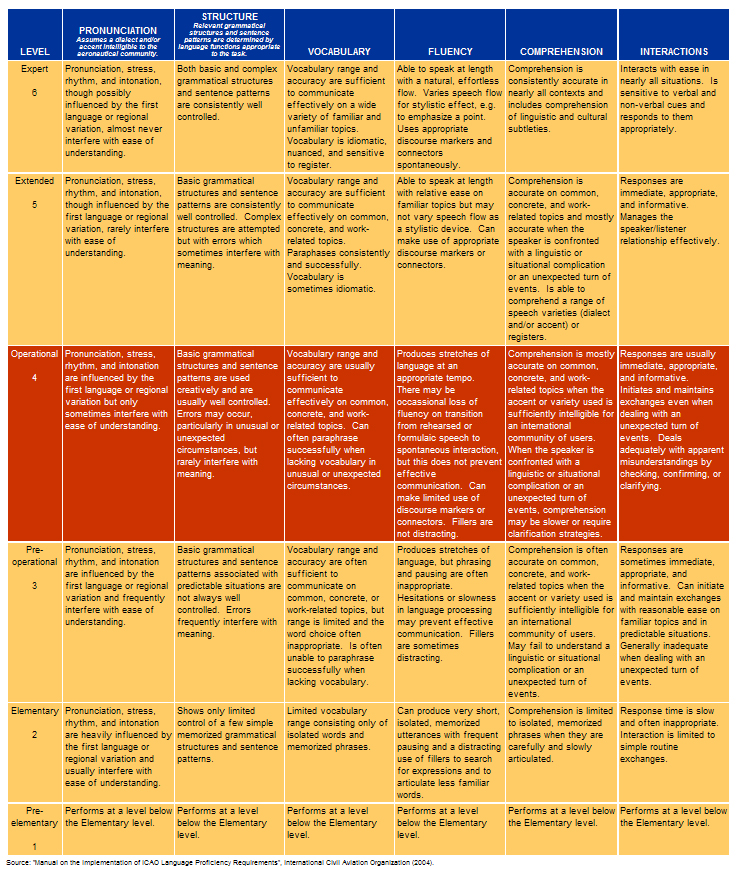 The Level 4 (operational) proficiency is considered as a minimum ‘stepping stone’ to higher levels. The main benefit of high international standards of aviation English is that communications between aircraft crew and controllers are fully understood, particularly when non-standard words and phrases are used. Also, improved language skills could help increasing the situational awareness of flight crews in relation to other aircraft, both in the air and on the ground.

Note: Commission Regulation (EU) 2015/340 states that the validity of the language proficiency endorsement for expert level (level six) is nine years from the date of assessment, for the English language. This provision is applicable for air traffic controllers in the EU member states.

The following events include "Language Clarity" as a contributory factor:

On 12 November 1996, an Ilyushin IL76TD and an opposite direction Boeing 747-100 collided head on at the same level in controlled airspace resulting in the destruction of both aircraft and the loss of 349 lives. The Investigation concluded that the IL76 had descended one thousand feet below its cleared level after its crew had interpreted ATC advice of opposite direction traffic one thousand feet below as the reason to remain at FL150 as re-clearance to descend to this lower level. Fifteen Safety Recommendations relating to English language proficiency, crew resource management, collision avoidance systems and ATC procedures were made.

On 5 April 2019, a Boeing 737-500 crew declared an emergency shortly after departing Madrid Barajas after problems maintaining normal lateral, vertical or airspeed control of their aircraft in IMC. After two failed attempts at ILS approaches in unexceptional weather conditions, the flight was successfully landed at a nearby military airbase. The Investigation found that a malfunction which probably prevented use of the Captain’s autopilot found before departure was not documented until after the flight but could not find a technical explanation for inability to control the aircraft manually given that dispatch without either autopilot working is permitted.

Whilst a light aircraft was lined up for departure, a vehicle made an incorrect assumption about the nature of an ambiguously-phrased ATC TWR instruction and proceeded to enter the same runway. There was no actual risk of conflict since, although LVP were still in force after earlier fog, the TWR controller was able to see the vehicle incursion and therefore withhold the imminent take off clearance. The subsequent Investigation noted that it was imperative that clearance read backs about which there is doubt are not made speculatively in the expectation that they will elicit confirmation or correction.

On 3 August 2017, a Boeing 737-900ER landing at Medan was in wing-to-wing collision as it touched down with an ATR 72-500 which had entered the same runway to depart at an intermediate point. Substantial damage was caused but both aircraft could be taxied clear. The Investigation concluded that the ATR 72 had entered the runway at an opposite direction without clearance after its incomplete readback had gone unchallenged by ATC. Controllers appeared not to have realized that a collision had occurred despite warnings of runway debris and the runway was not closed until other aircraft also reported debris.

On 21 September 2012, two aircraft came into conflict in Class 'A' airspace whilst under radar control at night and loss of separation was resolved by TCAS RA responses by both aircraft. Investigation found that one of the aircraft had passed a procedurally-documented clearance limit without ATC clearance or intervention and that situational awareness of its crew had been diminished by communications with the conflicting aircraft being conducted in Spanish rather than English. A Safety Recommendation on resolving the persistent problem of such language issues was made, noting that a similar recommendation had been made 11 years earlier.

On 9 January 1998, a Boeing 767-300 operated by United Airlines experienced an electrical systems malfunction subsequently attributed to arcing in a faulty electrical loom. The crew elected to divert to London Heathrow where emergency evacuation was carried out on a taxiway upon landing.

On October 14, 2004, a Bombardier CRJ-200 being operated by Pinnacle Airlines on a non revenue positioning flight crashed into a residential area in the vicinity of Jefferson City Memorial Airport, Missouri after the flight crew attempted to fly the aircraft beyond its performance limits and a high altitude stall, to which their response was inappropriate, then followed.

On 27 March 1977, a KLM Boeing 747-200 began its low visibility take-off at Tenerife without requesting or receiving take-off clearance and a collision with a Boeing 747-100 backtracking the same runway subsequently occurred. Both aircraft were destroyed by the impact and consequential fire and 583 people died. The Investigation attributed the crash primarily to the actions and inactions of the KLM Captain, who was the Operator's Chief Flying Instructor. Safety Recommendations made emphasised the importance of standard phraseology in all normal radio communications and avoidance of the phrase take-off in ATC Departure Clearances.

On the 25th of May, 2000 a UK-operated Shorts SD330 waiting for take-off at Paris CDG in normal visibility at night on a taxiway angled in the take-off direction due to its primary function as an exit for opposite direction landings was given a conditional line up clearance by a controller who had erroneously assumed without checking that it was at the runway threshold. After an aircraft which had just landed had passed, the SD330 began to line up unaware that an MD83 had just been cleared in French to take off from the full length and a collision occurred.