The due dates for national implementation of ESARRs are as follows:

A variety of means and tools have been developed to support the implementation of ESARRs by national safety regulatory authorities and ATM service providers:

The figure below represents the level of implementation of ESARRs as reported by States to the EUROCONTROL SRC. It is based on the information provided by 19 states out of 40 participating to the ESIMS programme.

ESARR 1: No EUROCONTROL State and no EU State has implemented all of ESARR 1, while only three EU States state that they have implemented more than 80% of ESARR 1. Most States are waiting for the EC to transpose ESARR 1 into EC legislation.

ESARR 2: Eight EUROCONTROL States (and six in the EU) confirm they have implemented all ESARR 2 requirements.

Sixteen EUROCONTROL States (and thirteen in the EU) have implemented more than 80% of ESARR 2. This represents an improvement, but significant progress is urgently needed at national level to enforce ESARR 2, as well as related EC Directives 42/2003/EC and 56/1994/EC in EU Member States.

ESARR 6 Two EUROCONTROL States report that they have implemented ESARR 6. 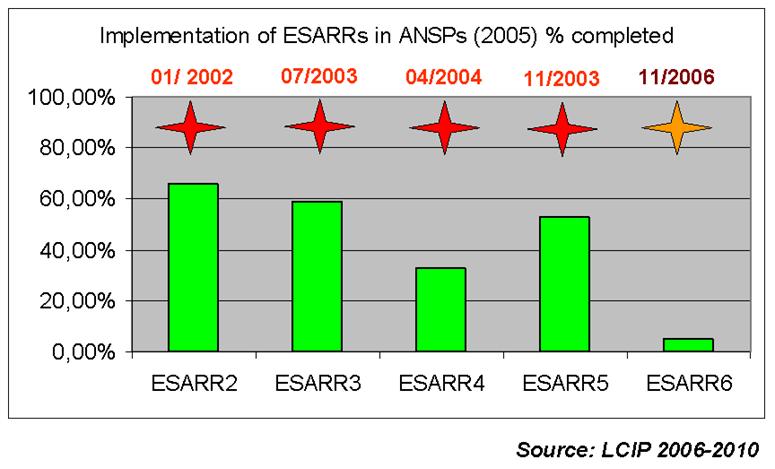 As shown above, the implementation of the ESARRs by ANSPs is, in the case of some ESARRs, in advance of the publication of relevant regulation by the state regulatory authority. However, the overall implementation of the ESARRs is lagging behind schedule. This is particularly the case for ESARR4 where ANSPs report problems with the quantitative aspects of the regulation.

The publication of the Common Requirements and the certification process may put impetus in the coming year to the implementation of the relevant ESARRs.

The audits conducted within the ESIMS programme enabled the identification of the constraints and problematic areas for ESARR implementation in the ECAC area.

The main issues related to ESARRs implementation by States or national safety regulatory authorities are:

The main issues related to ESARRs implementation by ATM providers are:

Transposition of ESARRs in EC legislation

A number of key ESARR provisions have been transposed into Community Law. This has been achieved through the CRs for the provision air navigation services, as well as EC Directives in the fields of controller licensing and incident investigation and analysis.

In accordance with the SES CRs, the Commission are required to identify and adopt the EUROCONTROL safety regulatory requirements (ESARRs) and any subsequent amendments to those requirements.

Substantial parts of ESARR 3, 4 and 5 are effectively dealt with in the SES CRs. However, current inconsistencies and differences in scope between SES CRs on safety and ESARRs could lead to discrepancies and complicate the implementation of the CRs and ESARRs at national level.

The EUROCONTROL SRC has reviewed the need for States to file differences to ICAO standards as a consequence of implementing ESARRs. Only one case has been identified on the understanding that ‘where national regulations of States call for compliance with procedures that are not identical but essentially the same… no difference should be reported…’ . It is recommended that States, having implemented ESARR 2, need to file a difference to the provisions of ICAO Annex 13, Chapter 8 only if they have not implemented a mandatory incident reporting system or if a voluntary system does not have appropriate non-punitive provisions.

Detailed information on ESARRs and related implementation guidance material can be found on EUROCONTROL website: http://www.eurocontrol.int/articles/src-publications